some observations about the worlds..... 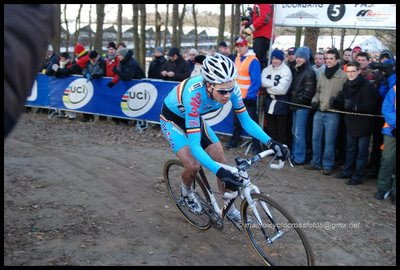 My prediction was as bad as it gets - 0 out of 3 to be precise. Ahem. Great win from Albert though, which was exciting in execution, though not so interesting to watch as a race.

the weather was cold and frosty rather than wet which made a big difference to the speed of the course and worked in favour of different riders to those I had picked. In came crit style racing out went good old fashioned mud plugging

the Belgians bizarrely worked together rather than against each other, confusing the Dutch whose plan went out of the window rapidly

Boom lost his marbles with only a half-arsed attempt by Thys Al to protect him, starting changing bikes in panic and generally had his worst race in years

Nys could have won for a change, but selflessly allowed Albert his moment (he took 30 secs out of Albert and Stybar in the last lap alone)

Jody Crawforth had a great ride - poor gridding obviously but posted quickest lap of any rider just at the end and got 31st. UCI points for gridding and some races abroad and he could be up with some well sponsored names.....

Eurosport was crap again - I Sky plussed it only to turn on and find it half way through the race. Quickly turned it off and waited for the Sporza coverage to come through on the internet later that night - excited, informed commentary even in a language where I understand only key phrases that come up again and again. Tochwel, ein richting finish. Heil szware cross. Or something like that.

Roll on next year in Tabor, though I suspect it could be more of the same - fast, frozen, with few natural obstacles to challenge, other than some elevation changes. Treviso, Hoogerheide, Tabor - three consecutive criterium cross courses for the Worlds. Maybe we need to put in a bid to host the Wolrds at Scorton or Boggart Hole Clough. Now that would really sort them out.............
Posted by crossjunkie at 12:24

The Brits may have been underwhelming, but at least we've not been blowing our own trumpets like the americans have for the last few seasons. Where was their first rider?

They seem to be developing a great scene in the states, but so long as they're only racing each other, they're not progressing as fast as perhaps they might. It would be great if cross in this country developed half the popularity it currently seems to have in the states - if it did, we'd be ideally placed for riders to start getting up there with the hitters at a world level.