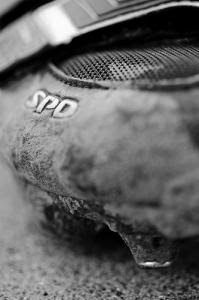 It seems everyone is at it now - the blogosphere is awash with people preparing for the cross season, thinking about the cross season or simply preparing to think about the cross season. Here Come the Belgians, Molly Cameron, The Service Course - all have carried preparation related posts. Duncan's 'secret place...' resonated so clearly with myself in previous seasons, scrubbing away in lunch breaks and odd evenings, holed up in some woods somewhere, alone and immersed in the business of cross.

Having said that, I am getting nervous about a lack of off road riding at present – I just seem drawn to the road all the time, avoiding the issue probably. Time to get serious and get muddy, or at least dusty.

The turbo too is a draw, bizarrely enough. I guess it seems like a good way to get into gear. Come on, you know this is the future, right? The only way to get close to replicating the hurt box, pain cave thing that racing cross brings. It’s either this or that nasty road racing thing and we all know where that leads……… Remember to do some offroad riding too, or you’ll be a turbo terror - sprinting out the blocks only to wipe out as soon as the course bends or goes through any bumpy and nadgery bits.

But running, erm. Well, maybe. I come from a running background (as a kid at least). Hell, I even had ambitions to do a Bob Graham Round (a loony 24 hour fell running challenge in the Lake District) in a previous life. But age, whilst it brings wisdom, also brings a diminishing ability to cope with the rigours of life on foot. Don't get me wrong, I don't dislike like running - it merely likes me even less. Without the 3 Peaks looming I suspect I would pay it as much attention as my garden - I acknowledge it's role and usefulness but fail to cultivate it with any great enthusiasm. But it is there in any cyclocross training schedule for a reason - occasionally, we have to get off and run. At high(ish) speed and without looking like we sh*t our pants. Running is a means to an end - the transition from bike to foot and back again is where you really gain or lose, but that depends on being able to maintain that speed in the first place.

So I urge you, go for a run - not a long loping perambulation through woods and over hills (unless you are doing the Peaks of course), but a short jumpy, sprinting type affair. Preferably up a steep bank, with an irregular surface and slick with mud. That's what it'll be like come race time and your legs will thank you if they have some advance warning of the whole affair.
Posted by crossjunkie at 12:47

Great post. An interesting account, but I must admit that I've never thought of my running as training for "the bits of cyclocross you have to run". You can only train for them by doing mad sprints in the pain cave anyway. As a HRM obsessive I see running as the great training it really is for cyclocross people - you use more of your body so it's easy to spend an hour at a high heart rate. You use your legs in road biking and a lot less of everything else - so it's hard to replicate that flat our race heart rate (and mental feel!!)

Running exercises more of our body's muscles - big time - than road riding or even MTB riding ever could - and that is what gives us the upper body strength needed in cyclocross.

An hour's run a day or an hour on the bike a day and (injuries aside) the runner will be a fitter, stronger and faster cyclocross rider in my experience.

Injuries are a biggie with running though. They can't be ignored.