There was a letter, sometime before Christmas, in UK publication Cycling Weekly. The writer had had an invite to watch the North of England Cross Champs, a traditionally muddy affair in November/December, and was experiencing cross for the first time.

For some reason he came away forming the view that cross was an elitist sport, and that major changes needed to be made to its rules so as to prevent it disappearing up it's own muddy backside and losing popularity amongst those who might be attracted to riding this winter discipline. Or something similar - I paraphrase.

His beef was around the multiple bike issue, whereby multiple bikes and God forbid jet washes, give richer and therefore elitist competitors an advantage. And this set me thinking....... 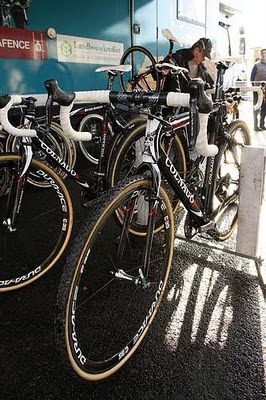 Though I'm not sure a one-off viewing of an event qualifies him as an interested expert, I'm not actiually arguing that he is wrong - he is in fact right - more that there is a more complex issue behind his (in my opinion) rather naive sentiments.

Should we ban second or even third bikes in cross. And if not across the board, up to what level?

I'll lay my cards on the table straight away - I have 2 bikes, though not usually access to washing facilities mid race. I have spent reasonable money on my bikes (mostly on tubs!), but I do not race other cycling disciplines, don't have a mountain bike and only have a cheap road bike. Cross for me is where I choose to splurge - and I have gained some advantage (probably slim) in a few races where a change of bike kept clogging down to a minumum.

I race at local level, rarely threatening even the Vets podium, and here's where the argument falls down - I am regularly beaten by those with one bike and simply more talent....

Any sport at elite level gets expensive. Cross is no different, and yes to compete at elite level requires 2 bikes and a pit crew washing. However, I would argue that if you are good enough to get to that level, you will get there on 1 bike at first, before making a commitment to splurge and boost your chances, or by attracting sponsorship or other support.

I actually think cross is quite a cheap form of cycle sport to get into - look at road racing, where good wheels are more than useful and cost a fortune. You can afford 2 cross bikes for the price of one bling wheelset and don't even get me started on team car support and the like. Or mountain biking where a full suss bike will cost you the equivalent of 4 cross bikes.....

So would I ban spare bikes and pitting up to regional level, say, allowing changes at National Trophy and elite level? Well, no - good riders will always come through the ranks and will find the necessary equipment as they do. Part of the skill in cross as I have explained before, is in making the most of machine and conditions to ensure smooth forward progress. If this means running more to avoid clogging then so be it. Alternatively, a judicious decision to pit, or not pit, are part and parcel of cross tactics at the higher levels, which need to be learnt at lower levels first.

I find cross hugely accessible at grass roots level, and whilst cycling is arguably a more capital intensive sport than say football, rugby or swimming, cross can be ridden competitively for no more outlay than other forms of cycle sport.

Besides, I like messing around with my twin bikes - twice the geeking about tubs and equipment. I wonder if I could stretch to three next season? 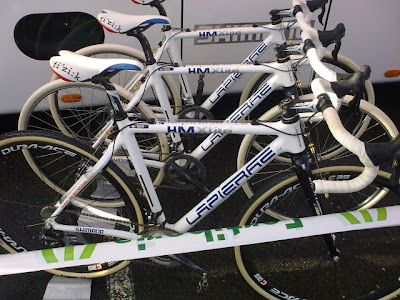 Maybe it's an elitest viewpoint of mine, but the tech-geek aspect of bike changes and everything else that goes with cross is a big part of why I like it.

You are right about cross being so accessible! I rode a season on my mountain bike and loved it. I can't ever imagine being in a situation where I was brave enough to even attempt a road race.

I race mountain bikes as well, you don't need to spend loads to get into it. I suspect my cross bike and mtb are similar value!

Funny, I read the same article and had had pretty much the same opinion as you. Why he didn't go to a local level event rather than the regional champs I don't know.