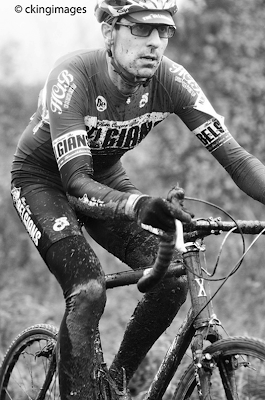 Proof if ever I needed it that there is ALWAYS something to learn about cross. Not that I consider myself an expert, far from it but I have taken more than a passing interest in cross over the past few years, and during a misspent student youth too, and it is nice to feel that there is more to uncover.

It had started the day before actually, during Friday lunchtime intervals with Dave H. Generously as ever, not only did he act as the usual hare to my less rapid endo and exoskeleton (see definition of tortoise), but he passed on some of the nuggets learnt from Ed Oxley's mountain bike skills sessions.

I'm not going to let you know what they were that easily (you can suffer the pain like I have to with Dave), but let's say I learnt how to career brakeless but in control down banked turns that previously required copious amounts of brake. It just requires confidence. And some instruction. Nice to learn at 42 what I could have found out at 22, but nevermind.

Moving on to the following day, and the unexpected bonus of an unplanned cross race. Unplanned in the sense of a hard training week, intervals the day before and some Duvel and Grimbergen action the (late) night before. Still, a pass out is a pass out and cross was available, albeit at somewhat late notice.

Cue decision to treat it as a training race. Sensible enough, I would say. Keep legwarmers on, turn up last minute without facility to pre-ride, start easy and enjoy the whole affair.

Wrong. Well wrong in the sense that I found it incredibly hard to race 'steady'. What I mean is that cross requires a do or die effort really - not poking at with a limp stick. Starting easy and without stress actually was more stressful as I was making mistakes all over the (unfamiliar) course and generally making a hash of it. Apologies to those behind me. When I got fed up of riding like a numpty and attacked things, ta-dah - everything got smoother, faster, more efficient and generally business like. (Well, until I face planted in one particular bog.)

So much so that I began carving my way back from a stately 40th-odd to a more purposeful 20-something-odd. And enjoying myself much more. It was a toughie too with big bog sections that begged for big-ring grinding and much slippery track that required relaxing and flowing.

It all came to an abrupt end just after passing the pits with the inevitable rear wheel puncture. I say ineveitable, as I had not pre-ridden the course. Had I done so I would have noticed the numerous submerged and hidden half bricks that littered the racing line. Having clattered several of these not once but on consecutive laps, my lack of intelligence in remembering said bricks for subsequent avoidance finally caught up with me at about 2/3rd distance. Faced with a full lap of running, even my penchant for old skool cross courses couldnt quite motivate me for that little number and so I gracefully staggered off through the bogs and retired.

So kids - dont kid yourself that you can have an easy race and toddle round - you can't. And pre-ride if you are going to run less than 25psi in your tubs. You might not get away with it otherwise.
Posted by crossjunkie at 18:29