Update from the Disco.

I reported recently on the arrival of a new kid on the cross block, the full carbon, disc only Dirty Disco from On One.

Available as a frame and fork package or a SRAM Rival build, I've been riding and racing the Disco for a bit now and have splashed out on that rarity, for now, carbon tubular disc wheels too. Suffice to say, my initial positive impressions have been reinforced and the party is in full swing now......... 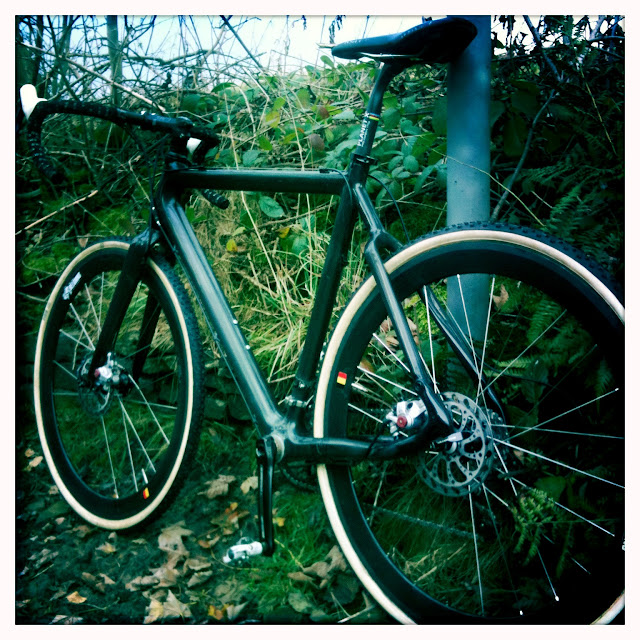 The Disco originally came via the On One test team (aka Dave Haygarth) with a zero lay back seat post and short 100mm stem. It made the handling vivid but slightly ungainly to ride for my lanky 6' 5" frame, especially as the frame is actually a L/56cm rather than the biggest XL/58cm size. That said, with a 120mm stem, and seatpost with average layback, I have recreated the position on my previous Uncle John frames even though they are actually XL in size.

This is in large part due to the pretty tall headtube and relatively long toptube - in other words this is quite a large 56cm frame. If you see what I mean. I fits me fine, even at my height and the smaller frame than i might normally ride, merely sharpens the handling with no trade off in comfort. 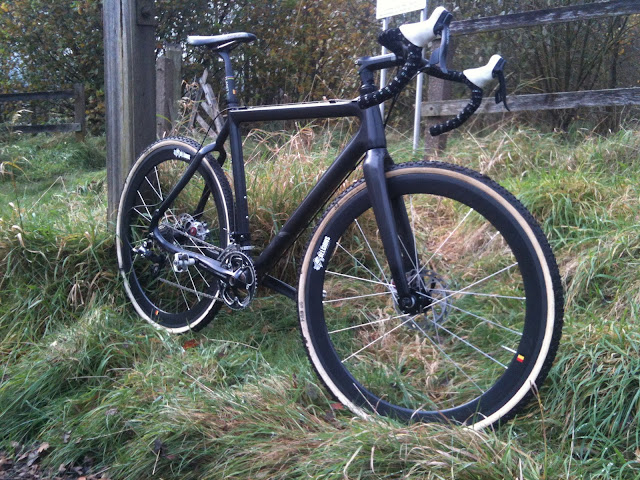 Apart from emphasising the stealth, weapons grade impression of the already naked carbon frame, the unbadged rims and Novatec disc hubs that I sourced from Hong Kong and built up for less than £250 have turned it into a full on race machine. More on that in a bit.

That said, I've ridden the Disco on the road quite a bit (mostly with my son) and it makes a great mile eater - stiff, comfortable and agile in hilly terrain. Commuting duties would be dispatched with ease and aplomb on it, with the On One 29er XC QR wheels giving flexibility for road, hybrid and off road tires alike. The lower maintenance and wear of the discs versus caliper or cantilever brakes would be a real boon here during the winter months.

But you still have that option of taking it off road on rougher stuff too, mountain bike trails and the like, as it is supremely capable on really quite rocky terrain with the discs and that massive chunky fork with 1.5" bearings doing the work for you. 3 Peaks training has been put to bed till next year, but I can't wait to get it out on the trails and hills in East Lancs. Double bottle cage mounts add to it's flexibility as long ride off roader too.

But for now it's cross season, and that means 1 hour blasts around muddy parks and fields. With deep section carbon wheels and FMB Super Muds, the Disco is genuinely a real race contender. More than can be said for it's rider....

The first proper test, at the Pignut Hill, Northwich round of the NW Cross League showed up the ease with which the Disco handled deeper section, stiff carbon wheels. Sometimes when I've used carbons, the reduction in braking power on slippy rims and their stiffness can make the bike handle less confidently than when set up with more traditional alloy rims and tubs, particularly on the technical sections.

Discs take that all out of the equation - braking is the same or better than the best alloy rims, and the 2x lacing I chose for the wheels gave stiffness but compliance when it got twisty or bumpy. It was fantastic to have a point and shoot bike that you could throw into corners and descents. Confidence inspiring too for me, as blinding technical skills have never been one of my attributes. 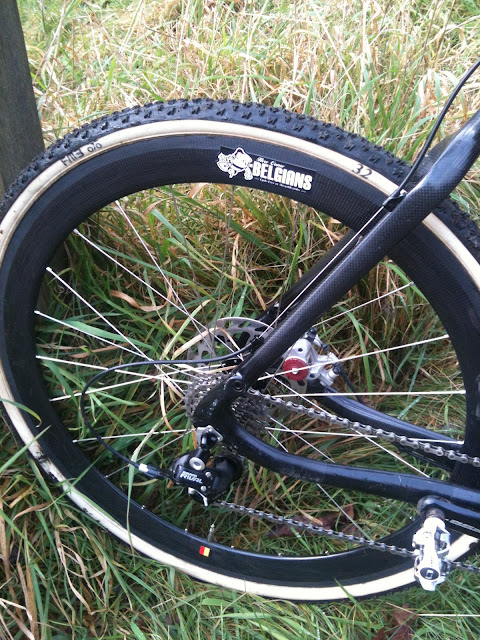 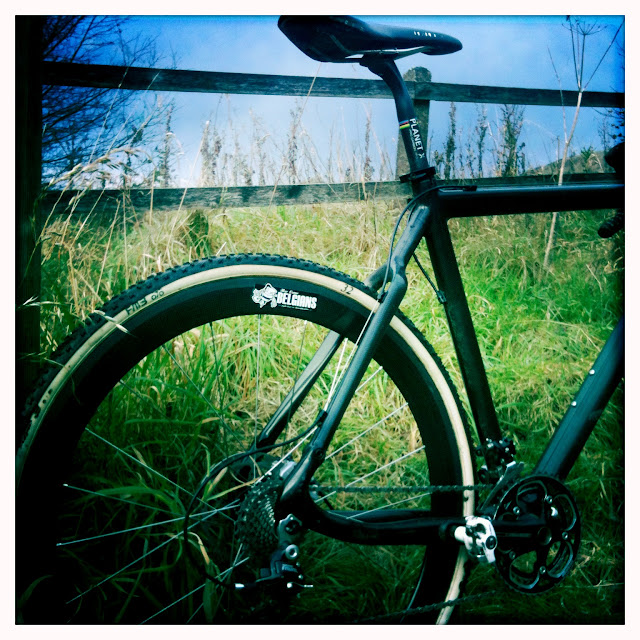 As I reported on twitter the other day, the Disco has become the bike that just makes me giddy to get out and loon around on - off and on road. A great overall package and at £599 for frame and fork or £1499 for a SRAM Rival build like the one above, it's a great way to get into carbon for cross, something I must admit I hadn't really expected myself to want to do. Subsequent full builds from On One will no doubt come out next year - expect equally great value from them too.
Posted by crossjunkie at 10:54

I fear it is performance enhancing and should, like training, be banned at once. That and the fact that after studying the shot of the seat stays there appears to be nothing to hurt yourself on with an unaccomplished remount. Just needs shiny black decals to cover some of its modesty/nudeness.

Great review Alan. You've hit the nail on the head about the subtle 'sum of the parts' things that combine well in this package. It does handle like a £2.5k bike and more, and the price ticket is just classic On One. Stunning value.

Only 316 days until the 3 peaks too....! Now the Dirty Disco and THAT makes me feel giddy with excitement...