If you ride a bike, at some point you will crash. Pro cyclists know this as an inescapable part of the job, the 'metier' of being a professional bike rider. Many mentally allow for a certain number of crashes per year, hoping that none will be too serious and put them out of action for long. It is a part of their existence that they neither welcome, nor deny, but just work through. Cycling lore is choc full of stories of suffering, of incredible feats against injury, of overcoming physical damage that would put most of us out of the running for any activity for a while, let alone the brutal world of professional racing. Hinault's broken nose, Hamilton's collarbone, Hoogerlands barbed wire injuries....all legend.

But what of the amateur or recreational cyclist, one for whom riding (and therefore it's flip side, crashing) is merely a hobby, an obsessive one perhaps, but not a means of making a living from day to day. How does the act of falling from one's bike, self-inflicted or otherwise pan out in a life only part-lived on and for the bike?

I had the chance to reflect on this the other day, when managing to have my most serious crash in some while, solo and with only my own stupidity to contribute to its execution. The act of crashing is a strange one, and influenced to some degree by who is around you. In a group ride or race, there's the unusual noise of tyres rubbing, a skid or bits of metal clashing that jumps out from the normal noises of group  riding, and precursors what can be a frightening and all consuming barrage of noise and movement, depending on how caught up you are in it. Crashing solo (or at least without anyone or anything specific to precipitate it) is different. A lapse of concentration, the sudden realisation that things are not as they should be in terms of line, balance or speed - the silence of it all as it goes wrong in front of you. With you. As part instigator, part passenger.

My own recent crash was a surreal mix of calm, noise and total confusion. A moment of calm when I realised I had got both my speed and my line totally wrong for a left-right combination, bordered on its right hand edge by a dry stone wall right next to the tarmac. It was all calm in the sense of there being nothing I could realistically do to get round the bend, so it was a question of waiting, with a bizarre curiosity to see how things would unfold at this point. After hitting the wall with my right hand and handlebar, it all went quiet for a little while. It was a bit confusing really, knowing that something was happening, but not being sure exactly what. The contact between my head and the tarmac moments later broke the spell, with the whole of my right side grounding an instant later to emphasise the point that things had probably not gone too well.

The aftermath of crashing is a funny-old affair - childhood habits kick in, those years of social conditioning of not wanting to betray the fact that you are hurt, stiff upper lip stuff (don't cry it's not manly, at least not at the age of 45), jumping up and walking around when by rights you should be sat down assessing things, and of course the biggest question and daftest thing of all - is my bike/clothing/sunglassess etc all right? Cycling at the higher levels, at least, is known as a sport of suffering. So, to call yourself a cyclist, it follows that you have to get back on, to shrug it off and to at least ride on a little while before succumbing gracefully and in a dignified manner to the fact that your injuries are severe enough for it not to be sensible to continue. Curling up in a ball, having a little cry and generally throwing in the towel are not really where it's at, however appealing at the time.

To be fair, there are also usually some practicalities involved around getting home somehow, unless you are unfortunate enough to need transportation by ambulance. This wasn't the case for me, so coasting down the hill, as others in the same event passed me, the consternation of friends enquiries in my ears, penetrating through the fog of pain and adrenaline, I settled in for a short ride back to where I had parked the car. With a hug from a friend at event HQ, that nearly precipitated a 'dangerous' display of tears and emotion, I got myself home before I felt any worse. And entered the world of the recently-crashed recuperating rider. And into a world of road rash, bruising, recrimination, financial calculations as to the cost of damaged stuff and the complex mash-up of concern and reproach from loved ones. In an age of social media selfies, I had to resist the temptation to bare more than was appropriate and demonstrate to the world, who must have been waiting with bated breath, just how I had hurt myself. I resisted on the grounds that such self-obsession is a little misplaced when others have hurt themselves far worse, and besides Tony Martin cornered the market and had the last word in road rash pics last year.

Road rash. That's a tortuous bedfellow if ever there was one. Add in some choice bruising and you have a combination that conspires in a perfect storm to prevent sleep and rest just at a time when you need it most. Your only hope for sleep is that you can find even one position where lying in vague comfort is possible, though this is usually rendered irrelevant when in your half-awake state you forgetfully move and find one of the other million and one positions in which it hurts and wake yourself up all over again.

After a few days of this but with some fairly severe neck pain to boot, I began to wonder if I had done something more than a bruising and rash job on my body. The fact that I had split my helmet in the crash had surprisingly not informed my thinking up to this point, at least in terms of getting checked out. Too much 'man-up' and not enough common sense I would venture. A trip to Urgent Care prompted X-Rays and then......... the sort of quiet, calm response from an ever increasing number of medical professionals arriving from nowhere and saying 'do not move'  and 'do exactly as I say' that directly impinged on even my blunted sense of self preservation to suggest that actually something might be up with my neck.

Five hours of lying immobilised in foam blocks, a c spine board and a rapid trip for a cat scan at another hospital as well as contact with a number of serious-minded and senior doctors, confirmed 2 fractures to my vertebrae (C7 and T5) and landed me in an immobilsing neck brace for 12 weeks. And induced a very intense feeling of having been extremely lucky that I walked out of the hospital unaided.

There was already for me, prior to that visit to hospital, a sense of balancing the 'what might have been' with a future full of the desire to ride still and the risk of doing something again - I had after all, split my helmet in the crash. But the realisation that I had been not just lucky, but extremely lucky will take some further processing and balancing in my head in the months to come. Any lesson to take from this? Go and get yourself checked out if you have a big crash. Notions of epic suffering, being tough, Pro and the like mean nothing when faced with a potentially serious complication that might otherwise remain undiagnosed. And Ride Safe out there....... 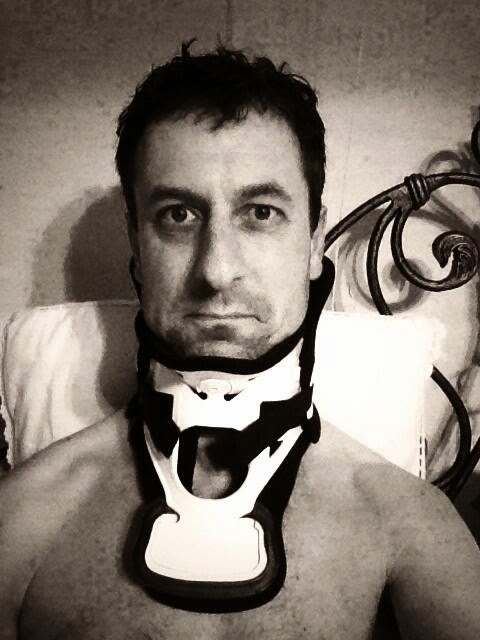 Ooooo errrrr Al, that was a crash.
Went past the spot on the Sunday and observed the skid and wall marks. Both me and Debs ouched for you!
Hope it all recovers to full strength ASAP.
Rich