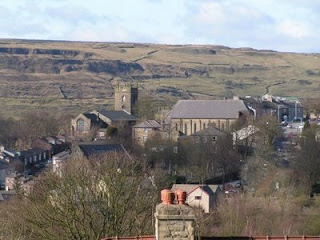 Cross comes to Rossendale! I am not sure if and when the last North West League race was held in Rossendale, but it has to have been a while back. By way of explaining my excitement, I work in and live very near to this post-industrial valley that sprawls eastward, 20 miles or so north of Manchester. Wheelbase's promotion tommorrow is being held in the centre of the Valley, in Waterfoot.
Waterfoot was once the heart of the area's footwear industry. It still boasts a splendid Victorian shopping arcade and is the base for the championship producer of one of Lancashire's best delicacies; black pudding. Oh yes, it doesn't come more traditional than this. 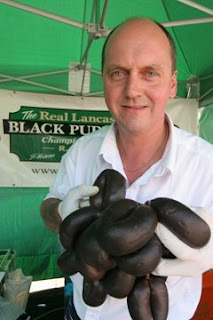 Regular organiser, and former NW League winner Dave Haygarth (pictured below and not above!) has designed a compact course making use of all the space in one of the areas old Victorian parks, set on a hillside overlooking the moors. Dave has always produced tough, well thought out and challenging courses (best described as traditional?) and this looks to be no exception. Particularly as it has snowed heavily here over the last couple of days. The course uses the natural contours of the park in a direct fashion - in other words there is a big climb up and a big descent back down, broken up in places with some good meandering around natural obstacles. 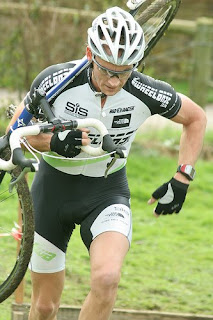 Despite the weather conditions, the race is very much on as this update from Dave on the NWCCA website indicates;
We’ve had a few queries about whether the event is still on - yes it is. The course may well feature some residual snow and almost certainly ice with the current forecast, but we will deal with this to make a safe course. It’s also likely to be muddy too. All the fun of winter racing in one go.
Cycling Weekly have published the venue as an old venue that was originally in the BC handbook - the event takes place at Edgeside Park, Waterfoot, about 2 miles from Rawtenstall.
There’s still quite a bit of snow and ice that may make local access to the venue at Edgeside Park slow going - but please use the allotted parking marked off Wales Road - please do not park on the road side.
Come and support this well organised and well-prized event!
Posted by crossjunkie at 13:02

Thanks Alan... just off in a moment or two to set the course up. Good luck!