hit the north... again, only harder 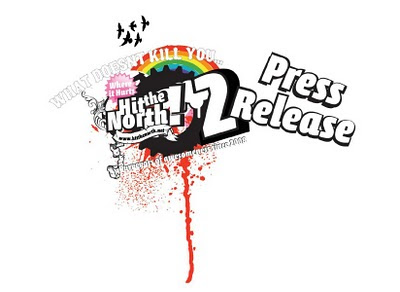 Those slightly scary but fundamentally nice people over at Hit the North are accommodating us competition starved crossers with....... an 8hr version of their hugely successuful 2hr winter race. Yes really.

Hit the North is back on July 17th.

Entries are now open and places will be limited.
All three previous events have sold out in a matter of days, so you need to get yourselves and your team mates organised and get your entry in!

The entry fee will be £33.33 per person and it is up to you whether you register as a solo, pair or team of 3.

For that you get...
An 8 hour lap based event on a completely new 6-ish mile course on mixed terrain including some bits that would perhaps be better ridden on a mountain bike and some bits that will probably be faster on a cyclocross bike... Oh, and there will be some carrying sections.
Free camping on Saturday 17th. Additional camping is available on Friday 16th July for a fee of £3 per person payable directly to the campsite on arrival.
The usual awesome catering.
Trade stands.
A beer tent with live band and DJ for the after event party.
Electronic timing with a free access site wide wireless network so you can keep tabs on your performance in real time via a phone, pda or laptop.
Toilets and showers (that work).
The usual relaxed atmosphere that HtN seems to create.

All proceeds will as usual be donated to local charities and we are being supported by the amazing generosity of JMC IT, Cloversoul Jewellery, Pro-Lite and Ragley Bikes.

Go to our website for entry, news as and when it happens, details of preview rides, ask questions and put in a request for the DJ on our forum and maybe some other stuff.
www.hitthenorth.net

Let me also plug and declare an interest in the post race party entertainment - principal accordian player for the Balkan Gypsy Ska-sters 'Nazedrove Houseband' is none other than my old music college pal and fellow Belgian, Winkie Thin.

Having played with diverse luminaries such as Lisa Stansfield and the Halle Orchestra, as well as at my wedding, Winkie seems to have inflitrated this band of merry loons and will doubtless entertain us while the beer tent fills to the sound of dehydrated ectomorphs keeling over after the first pint. Or is that just my likely fate....?

Get entered, get ready and come and Hit the North.

Infomercial over.
Posted by crossjunkie at 13:47

Said accordion player will be teaming up with otleyrich to chase you around the course too... think we'll only have to ride half as far as you crossjunkie ;->