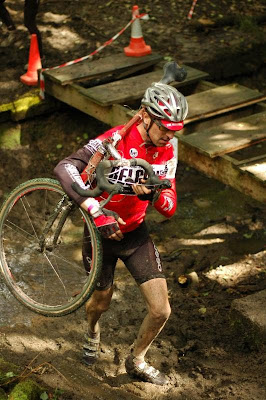 I'm sure self respecting and capable crossers all over the place have been preparing way in advance of 1 August but for me, this date always marks the start of the beginning of the new cross season. And it occupies a significance and resonance in the year calendar accordingly.

(And no, Hit the North at the beginning of July doesn't count as cross training as it was clearly insane trying to ride 8 hours on a cross bike on a mountain bike course. I live and learn.)

Those keener and more adventurous than I may have been riding crits, mountainbike races and other competitive pursuits. I usually content myself with social riding and the odd long sportive or ride. It probably shows come December time but to be honest I can't sustain that competitive urge all year, nor square it with my domestic situtation.

I like the rhythm, the solid predictability that the summer cross routine brings. Peaks entries have gone in at the beginning of July, confirmation is received (hopefully) by mid July but it's too early yet to go at it full gas - note to self: need to keep some powder dry for the long winter months. So July is hols, road rides and ignoring that slightly anxious feeling that Peaks preparation should be well underway. There's still a long way to go yet - even friend and obsessive Peaks guru Dave Haygarth doesn't let himself loose till mid August. Usually at least, as this year he proved me wrong by recceing Whernside on foot on 1 Aug, but by his own keen standards that is unusual.

But after 1 August - things have to happen. Now. I start taking every opportunity to ride the cross bike, ramp up the running (or start if really laid back), think about equipment choices (dream about emulating Dave's 3 bike strategy for the Peaks). Introduce more quality training.....

Of course this is always complicated, nay muddied, each year by the competing demands of the 3 Peaks and the 1 hour League races. Neither seem to fit neatly together. Of course, the base strength and fitnes for the Peaks will pay dividends later in the season, but going from a 4 hour slog fest to a 1 hour burnup in the space of a week is hard for the terminally talent and time limited, like myself. 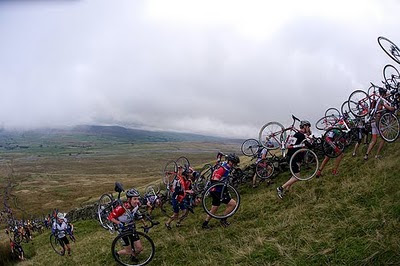 A slightly whimsical twitter question the other day produced the responses I knew would come - train for the Peaks and the season will follow, stupid. Or something like that. No one wants to grovel around the Peaks, and my propensity for cramp seems unabating. But time is the killer here, so I set to thinking about how to prepare for both with the minimum of time, though not necessarily, effort.

Here are my own tenuous strategies and tips - I'll let you know in October whether they worked......

A few times a week, ride off road to work and back, instead of on the road (luckily I have the environment to do this). Need. Upper. Body. Conditioning. Plus the double training dose of Human Growth Hormone, or whatever my own legal and natural product is, won't go amiss.

Do longer off road intervals - 10, 15 and 20 minute efforts. Not flat out, but not hanging around either. Enough to build fitness but without being part of the long rides I should really be doing.

In fact, do 30 mins hard off road, run 20 mins and then repeat. Again, if able. My cramping seems to happen when riding hard and then getting off and walking/running. It may be nutrition, or hydration or maybe just the shock to the system. Given that I can cramp going out of Ingleton on the road to Whernside, you may see my predicament and concern. It's a one way street from there I can tell you....


So, we shall see. A successful lunchtime foray around a local cross circuit doing 8 min reps followed by a calf crunching run straight up Rossendale's industrial fell side has left me suitably wasted. Onwards and upwards.
Posted by crossjunkie at 14:47

Good call on the brick workouts. Combining bike and runs will def get the muscles prepped in short order!

I've used interval and brick training for triathons since '04. *When* you do them over a month; significant perf gains ensue.

I haven't fig'd out cyclo-x yet though! I've always tapered length/distance/effort based on the race over 1-2 months.

The season for NW cyclo-x is every weekend from sept - nov. which bascically means july - aug are the hard training months. And of course these are prime for family/friends/fun...

It's cool to see diff classes/workshops pop up regionallY!