Dublin based friend, sports science researcher, part time triathlete, full time cross enthusiast and cake-eater Greg May has been giving me some Peaks training advice this summer. Obviously most of this a highly guarded secret, but I can reveal exclusively that he has told me to 'go long'.

No not a reference to socks a la Wiggins, but a 'you also need to just do some prolonged running' type suggestion. Now some of you love running, some of you hate running. I don't mind it, well quite like it actually but have always banged on about the fact that the Peaks doesn't really have much running in it unless your name is Jebb with an initial 'R'. Shuffling agonisingly upwards is more apt a description,

However, Greg has letters after his name and threatens to get even more soon, so I thought I had better do as coach says. So I went for a long run. By that I mean an hour round the woods near Arnside Tower, in South Cumbria. And very nice it was too - the monsoon rain meant bike riding was less than desirable and therefore a run a more comfortable option. I spent the hour pleasantly and confusingly, getting hopelessly lost not once but twice and nearly being late to pick up my son and friends from a weekend long Scout camp in the area. They had been in the woods all weekend and were unsurprisingly caked in reddy orange mud, the effect of which was to give my son a 'you've been tango'ed' look. Much to my amusement.

Anyways, the effect of all this running, apart from a mild case of DOMS (look it up) on Tuesday was to make the weekly Bull Hill efforts with Dave Haygarth and Carl Nelson feel vaguely doable. Not that you would have gleaned this from my expression captured by Dave, just as hostilities were about to commence: 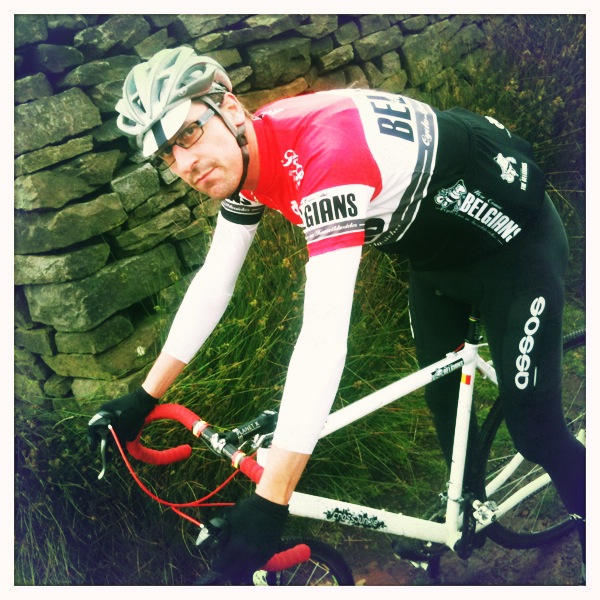 So, more longs are planned - with or without getting lost. But solo, as I still shuffle round rather unglamourously rather than striding athletically. Ah well.......
Posted by crossjunkie at 09:59

Dont give away all the tricks just yet ;)