In terms of synonymy, Bull Hill and the 3 Peaks have one of closest relationships present in my cluttered mind. Geographically apart, diverse in scale in all aspects, they still manage to have this peculiar intertwined relationship for me - the one giving rise to the other in so many different ways.

Let me explain further. Whilst Bull Hill has been there for some time longer, an innocuous moorland hill on the first of the northern hills above the Manchester basin, 'Bull Hill' is the slightly more recent invention of blog regular Dave Haygarth. In looking for somwhere to train and replicate the demands of the 3 Peaks (or so I assume), Dave looked out of his house at the glowering hillside above him and went out to uncover a small circuit of unsurpassable simplicity, relevance to Peaks terrain and sheer pain. 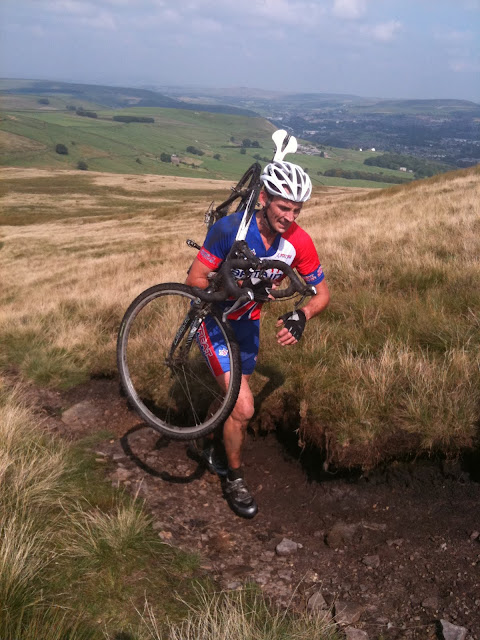 What it lacks in length, the Bull Hill circuit makes up for in intensity. I wrote about it's peculiar charm last year describing the circuit thus:

'...a warm up on a monster climb up onto the moor – a descent down a shattered river bed (under 6 inches of water) but posing as a track – a walk/scramble up a 45 degree slope easing off into water logged peat bog caressed by a howling gale – an attempt to shuffle into a run and summit up further steep slope onto Holcombe Moor – before an exhilerating career down the other side, wiping sweat from my eyes and trying not to crash before turning left to go down the shattered river bed again and repeat.'

And so Bull Hill has for me almost become part of the Peaks experience itself - not just a means to an end. The Peaks means Bull Hill and Bull Hill means the Peaks - the two have become almost inseparable in my mind, and in their stomach flip inducing status. Dave has been doing Bull Hill reps for some time already this 'summer'. Cue some nervousness from me then on Friday as I pitched up for my first session, even though I had tried to do some preparation for it in the past couple of weeks.

To get to the circuit and by way of warm up, there is a rocky bridleway climb followed by a grind up through moorland that is actually bigger than the circuit climb itself. If I am honest, this part fills me with more dread than what is to come - on this first session, I think I probably hit my max heart rate trying to stay with Dave and 'clean' the greasy slabs and rocks on the way up. Not an auspicious start before being forced into a shuffle after the top gate onto the moorland: 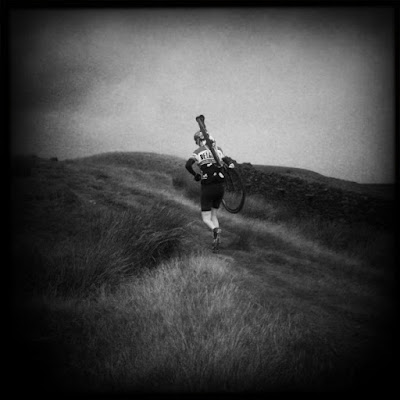 Pic: Dave Haygarth
Christ, those ensuing laps messed with my head - pain, self doubt, fear, humiliation all featured on the next two 15min or so rounds. Character building stuff indeed, but I had a moment of clarity for myself proving just how tough mentally you need to be to perform at the highest level in an endurance sport - to banish the self-doubt in face of the discomfort and the difficulty of your chosen activity. And that is why I remain a commited enthusiast rather than a high performing athlete. I simply don't have the strength of character it takes (as well as the genetic ability of course) to reside in the upper echelons of the sport. No matter, I enjoy what I do, in the way that I do it. And will continue to for some time yet.

Dave on the other hand was on fire. Here is the final, steeper than it looks climb to the summit on his last lap:

His 3 laps (to my 2) were consistent, measured and within 10 secs of his lap record. A fine effort, indeed. There will be more of the same for the next few weeks including a push to 3 laps in the very near future. That's more of a mental barrier than anything else but crucial nonetheless.

The relief on getting back down after that particular experience, and in the worsening weather, was strong: 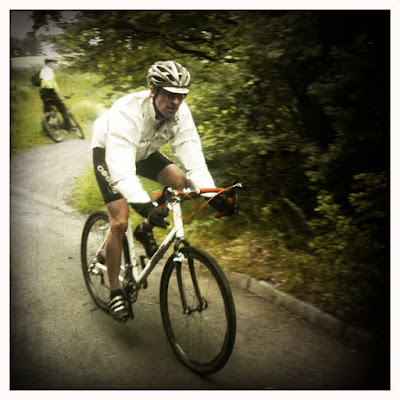 I don't believe that you don't have what it takes.

Nice words. Inspired by you pair, I've got my own little loop with a bit less climbing, with a 3min steepening shuffle. I'm guessing it'll never get easier, just a bit more doable. Went from 6 to 7 laps last week. Horrible!