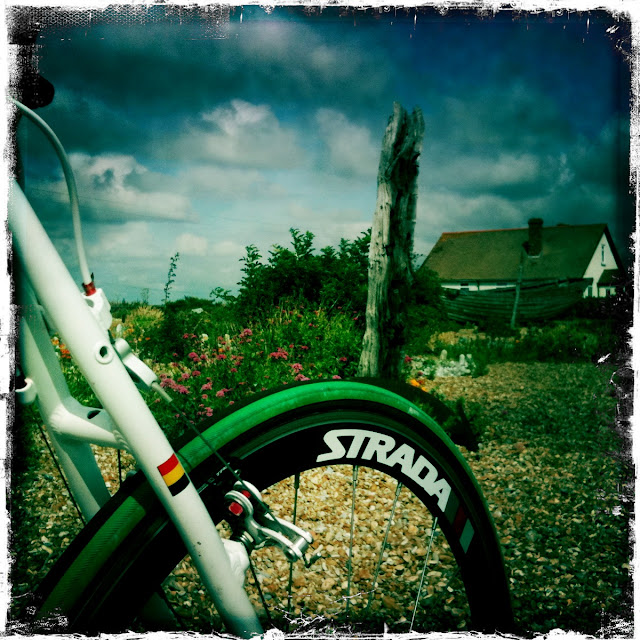 By way of update, these have become my favourite road wheels of all time. Yes, better than tubs even. They were absolutely superb on the flat, windswept terrain around Dungeness, and despite being quite a deep rim seemed remarkably unaffected by cross winds and the sudden gusts that were de rigeur for riding around there. Moreoever, commutes off the moors into my hometown on exposed and gusty main roads that can feel quite dicey have felt reassuringly secure. They catch sidewinds and gusts less than a 30mm pair of clinchers I have previously used, or at least behave more predictably when they do.
The braking surface when new is anodised black with the rest of the rim. Virgin rims therefore look for all the world like full carbon rims. This has predictably worn off now, but the overall aesthetics aren't spoilt - they simply look like a lot of the carbon clinchers with alloy braking surfaces that are out there. Much bling for much less buck.
I particularly like the striking Strada graphics on the rims that look amazing when rolling along and reflected in shop windows. Beware parked cars.....
They remain, still, micron true - something that has hugely impressed me having used similar style mass produced wheels which have not.
They would be good too for circuit/crit racing as they are super tough and somewhat less fragile than your expensive 50mm carbon offerings...
More to come on the Strada Major Toms too as the cross season gets underway in a couple of weeks.
Posted by crossjunkie at 15:40