It's an evocative enough word - Gallic in tone, though as ever Greek in origin. But one with a relatively short history, first having been coined in the 1970's.

And within that simple word, lies a whole world of intrigue, technical demands and, this being cycle racing, pain. Short and hard, sometimes technically demanding, the crit is not a million miles away from a cross race. Except where cross races don't usually deliver in speed terms, crits produce a speed element more akin to track racing. That speed, over a short course, turns out to be great training for cross and so crits have often been the staple summer diet for cross enthusiasts and specialists. Except this one.

I'd always eschewed crits - part fear, part dislike of a road scene that perhaps unfairly I'd felt to be cliquey and elitist. Either way, far removed from the experience of cross. But, peer pressure is a wonderful thing, and the sight of friend Mark riding his first crit at Preston on a Thursday night convinced me to dip a toe in.

Immediately addictive, it was of course nowhere near as bad as I had imagined. I've done a few now, getting better as I go. Or rather getting dropped less rapidly by the Elite/1/2 riders, getting in some good workouts and improving speed and confidence all the while. 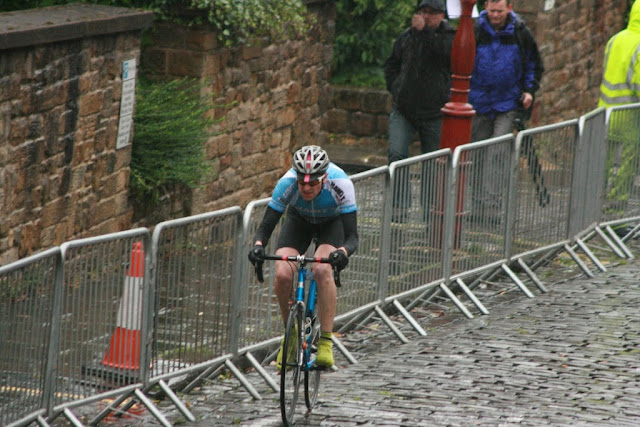 Perhaps the most fun was a closed road crit round the lumps and bumps and copious cobbles of Lancaster City Centre. Add in the worst storm/rain event in many years and it was immediately a classic. All the more so as team mate Dave H got 2nd in what was a tailor made course for his skill and power.

I can feel a few more crits coming on before the summer is up - a perfect distraction before the real racing starts in September...........
Posted by crossjunkie at 22:05