The Mud Index - sponsored by crossjunkie

The original idea for this index came from an article in about 2000 by Dave Carr, a stalwart of the Californian Norcal cross scene. I’ve adapted it for European and more specifically, North West England conditions and changed the classification a little.
For the purposes of this Index, mud is ranked on a scale of 0 to 10 according to moisture content, zero being hard and dry and 10 being liquid water. Other properties include material content, color, stickiness, and so on. 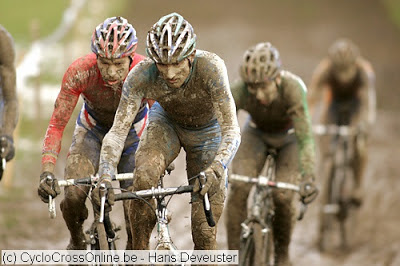 Grade 0 – dry dusty trail. Rare and iconic, this grade almost doesn’t make the classification due to its hugely infrequent appearances, seen only at the occasional summer cross. When it does appear, the smugness of those who have held onto file treads in the forlorn hope they might get some use, is something to behold. Not really fit for purpose in a cross race...

Grade 1 - Damp Earth. Nice and soft, tacky. Makes a pleasant sound as tires roll over it. Fun and effortless to ride on. Ultimate traction. Never separates from the ground, or if it does it doesn't stick to the bike. Your bike won’t need cleaning which is nice, but because of that you forget that your tyres will drop mud all over the house when you move them after it has dried.

Grade 2 – Crosser's Clay. A bad kind of damp earth, with not much more moisture content but a high clay content, found in several regions of the North West. Soft and sticky, it sticks well enough to shoes, but doesn't separate from the ground too easily. meaning it slows down the bike and drains a rider's energy subtlety and mercilessly. Irritatingly too, it fills the pedal cleats on shoes, rendering them heavy and impossible to clip in. Following rain, this type quickly transforms into Grade 3, which is even worse. 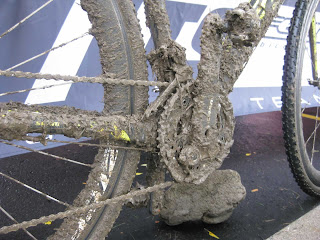 Grade 3 - Play-Doh. Water content is up to about 20-30%, leading to major sticking action. Literally jumps from the earth to your bike. Clogs up all treads (clincher or tubular) period, except perhaps an FMB SuperMud tub. Or possibly and old original Green Michelin Mud, clincher or tub conversion. Fills up the spaces between the tyre and frame, and quickly renders your gears to jumping single speed status. Causes the bike to gain 5 kilos in a matter of minutes. Requires pressure sprayer and brush to remove. And a spare bike and pit monkey or 3.

Grade 3F: Frozen Play-Doh. Occasionally frozen conditions in January can give to rise to this living hell for crossers. Don’t even bother racing without a spare bike and pit crew...

Grade 4 – Peanut Butter. Less sticky than Play-doh; more likely to stay on the ground. Moisture content is up to 40% or so. This stuff is sticky enough that one can't really plow through it, yet it's slippery and makes it hard to control the bike. Ruts form which may yield to a tyre, or send the bike careening off in an unanticipated direction. Requires ferocious pedaling to keep momentum – think parts of Leverhulme Park, Bolton. Occasionally a piece sticks to the tire and is thrown into the air, subsequently landing on another rider's face. Good for photographers. 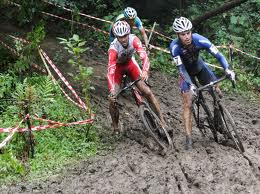 Grade 5 - Goo. About as thick and sticky as the energy gel you eat during a race, only brown and slightly less tasty, and more likely to be lumpy. Like Peanut Butter, Goo stays on the ground, but is less resistant to the advancing tire. At the now defunct Scorton Cross, large sections of this often included some content of cow dung or rotting flesh. In more pleasant venues Goo may be found on the verge of a wet grassy area where a few tires have passed. 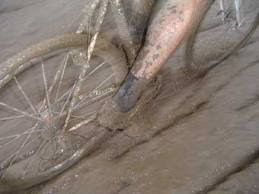 Grade 6 - Slime. This is the level of mud where a rider really begins to have fun. Slime is wet enough that it sticks to everything but doesn't really build up on the bike. Sticks together well enough that it will fly through the air in large masses. Slime often is found in corners where it can wreak havoc with traction, leading to a slide on your butt on the wet ground. Think Avenham Park Sept 2012....

Grade 7 - Glop. This is the wettest consistency of mud that can still hold a shape. When tires pass through Glop, a furrow is left that heals up slowly over time to a smooth surface. Liquid water may come to the top. It's better to have thin 'cross tires to slice through this stuff – yep, old school 28s and 30s. Imparts a shiny appearance to bicycle and body parts but at least cleaning is not so bad if you don’t let it dry.

Grade 8 - Slop. The bottom of a very wet mud puddle that is not refreshed by a stream. Still retains some lumpy qualities, unlike Grade 9  - Soup. Splatters very nicely and stains clothing better than any other type. Those in white kit will moan and their washing machine will shudder. Renders your glasses completely opaque. Remember not to smile at your friends after a dunk in this stuff unless you want them to laugh hysterically at the mud between your teeth. 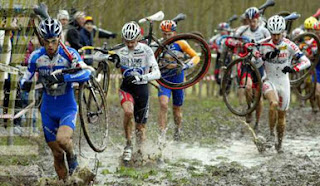 Grade 8a – Bog. Specific to 3 Peaks Cyclocross, this is mostly water but with enough organic matter to coat everything and stop forward progress in an instant – see ‘Go on Ian’ faceplant http://youtu.be/Q5Hluv6Nzwg

Grade 9 - Soup. 80-90% water, heavily laden with sand, particulate and goo, but without the lumps characteristic of Slop. Scientists might classify this grade as a "Non-Newtonian Fluid." Typical of a stream crossing where the stream flow isn't fast enough to refresh the mud. Will soak your jersey completely, while leaving the particulate matter all over the front. Doesn't stick to the bike, instead just runs off onto the ground. Aim for this if your bike is clogging with mud elsewhere on the course.

Grade 10 - River Water. Might feature some residual brown colour (peat) but doesn't stick to anything. Just wet and cold without any redeeming qualities other than it may loosen up thicker grades of mud from your tires and shoes. Mainly confined to the 3 Peaks Cyclocross.
Posted by crossjunkie at 20:07

I'd have to say there were several patches of grade 8 at Boggart Hole Clough last week- along the return of the top field and along the bottom before the tarmac climb, f'rinstance....

Not a million miles from the bristol stool chart...

Not a million miles from the Bristol stool chart...

Sir,
I approve (and applaud) your re-creation of the Mud Index.

Thank you - I hope it does your original idea justice.

What about Eastern regions wet sand that you find in your bum crack 3 days later despite showering and which gives you nappy rash.