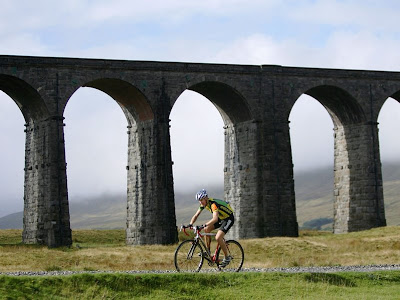 The 3 Peaks is a special race. Period. It occupies significant space in the minds of many cross riders, fell runners and mountain bikers, many of whom have acquired a cross bike simply for the purpose of riding in the event once a year. Promoted with unfailing commitment and enthusiasm by John Rawnsley, the race has reached legendary status across the cyclocross world and attracts competitors from Europe and the States as well as a fanatical UK contingent - http://www.3peakscyclocross.org.uk/
Regular competitor, Dave Haygarth's blog http://3pcx.blogspot.com/ documents his own personal obsession with the event beautifully and I suspect mirrors many others' feelings and experiences too. My own relationship with it has been a dichotomy of love and hate. I first rode in 1991, the year of Nick Craig's one and only win (so far). Naive and unaware of what was about to unfold, I finished 14th and 1st novice despite a puncture travelling upwards (!) toward the summit of Whernside. My on-off relationship with the Queen of cross events had begun.
The following year, forewarned and forearmed I came back and went at it with full commitment. 4th over the top of Ingleborough, I paid for the early pace and faded a little to finish 10th. Fred Salmon won in a new record for that course (now changed to include the slabs off Whernside). My abiding memory of that day was nearing the top of the steep climb up Whernside, just before the rideable drag to the summit, to see Fred charging back down again, breathing like a raging bull and with a burning intensity in his eyes that scared me. He had set out his stall to break the record and nothing was going to stop him that day.
Since then, me and the Peaks have never quite seen eye to eye - a DNF the next year, a 12 year break followed by a further comeback DNF led to an epic sub 5hr ride in 2005, laden with cramp from Ingleton onwards (!) and reduced to a crawl on all but the flat road sections.
2007 was to be my year - course recceed, running and carrying done. I was in the best form since...... well a while. Foot and Mouth did for that then. This year, I had an entry but deferred it, feeling that there were others more desparate to ride than I and burdened with a number of changes and commitments on the domestic front.
And so to this year - it would be a brave person to bet on anyone other than Jebby but Stuart Reid and Stu Bowers are my dark horses. Nicky Craig and Lewis Craven will also be up there in the mix and hopefully will have a better run of luck than in 2006. Whilst recent dry weather has eased the mud in my local parks, I suspect it will take more than a couple of warm days to dry out the Dales and conditions may be reasonably soggy in places. That said, path maintanence work seems to be moving on apace in that corner of the world and the course is more and more surfaced each year.
I can't and won't stay away from the race though, even when not competing - the kids will have a mandatory day out, holding wheels and bottles for a few friends and anyone else who needs them. The crowds of helpers, and their charges battling the environment, are part of the unique atmosphere of the event - the course is a great leveller and anyone who finishes gets my respect, regardless of whether they raced or just rode. Good luck and chapeau to all riding on Sunday. See you out there.
Posted by crossjunkie at 09:47

Nice one Alan. Sorry you cannot make it this year - throw me a bottle at Ribble head! Cheers Phil
http://3pcx.blogspot.com/2008/09/bring-it-on.html