Final preparations for some of the 3 Peaks cyclocross riders were underway last Sunday with the Lancashire version of the Peaks, the 3 Towers. Held as an informal ride rather than a race and organised by Horwich CC, last Sunday's edition saw a sizeable group enjoying the Lancashire moors on cross bikes, mountain bikes and foot.

The route covers Winter Hill twice and Peel Tower, Ramsbottom and was led by 25 times Peaks finisher Eric Taylor. Good training was had by all (so I hear) and serious Peaks devotees hopefully found their running/walking legs in time for the end of the month. Photo Mark Leyland. 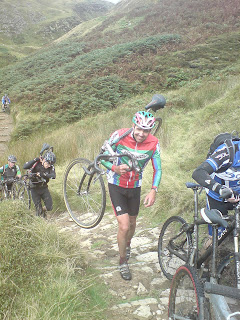