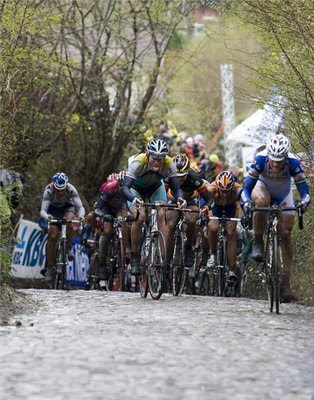 After the mayhem of the Koppenberg, with Gary riding high after his successful run up through the masses, there was a brief interlude as we dropped down off the hills and on to the Steenbeekdries. Whilst I had obsessed enough to know the exact order of the climbs from memory (for which I got much stick), I hadn't worked hard enough to grasp the exact meterage between them and was caught unawares by a sharp left onto the flattish cobbles that run up to this next horrorshow. Trying to eat a gel and ride Flemish cobbles may be possible for those born and raised in Flanders but it was beyond me and after the choking fit had subsided, I was able to enjoy the gentler gradient up the Steenbeekdries before the monumentally rough cobbled descent down the other side and over the railway line. Having seen crashes there in the race in previous years, a cautious approach paid dividends although cross handling skills must have helped as I was overtaking a fair few, despite not being known for my skills downhill.

A quick burst led on to the Taaienberg 3km later, past the invisible traffic island that was to catch out Angel Gomez in the pro race the next day, leaving him with a broken leg after a sickening crash. The Taaienberg is a lovely climb even in the wet and mud, being tree lined, less steep and with a more relaxed feel. I took to the smoother gutter near the spectators, Flanders hero style and promptly nearly ground to a halt as it was full of mud. Local knowledge must play a big part in the pro race, as most of the local pros know each and every cobble and line on the bergs, having grown up with them.
From then on, there was a long section including 6 tarmac bergs on the way to Geraardsbergen and the Muur, that have the effect of wearing you down somewhat in preparation for the final 2 cobbled climbs. This passed without incident, though the pace lifted somewhat when a Quick Step pro (Steven de Jongh?) tooled by warming up for Sundays pro race. He sat up long enough to admire Gary's Belgian style Rapha winter hat, seeming impressed by his style and panache. He muttered something like 'Chapeau' or whatever the Flemish equivalent is. Wannabes jumped on his wheel while we let him go by and up the road. After 4 hours of rain, and wind the sun came out and the rest of the route was bathed in sunshine, allowing us to dry out somewhat and efffectively baking the Flanders grit on our clothes and faces into a crust.
The run into the Muur in Geraardsbergen is lovely - typical Flanders countryside giving way to the urban build up before the famous motorway bridge that takes you into the bottom of the climb. With no contact from Winkie, even by phone (he had stopped for one of his famous leisurely cafe breaks) we pressed on. Unfortunately the sportive route takes a diversion from the race route at this point taking you by tarmac back roads in to the top of the cobbled market square and onto the cobbles at the point where the attacks tend to go. Nonetheles, it was mighty impressive looking up at the Church at the top and wondering how you were going to get up there. I was suitably psyched by this point, wanting to get up the Muur and Kapelmuur in style and went 'a bloc'. Gary promptly dropped me as he had on every climb so far, though I kept him more in sight than previously. A few dicey moments with the day trippers on shopping bikes and green greasy cobbles and I was powering alone up the final ramp to the church and onto victory - in my mind at least. 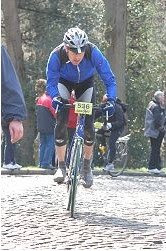 Most surprising moment of the day (apart from the size of Winkie's bladder) was the drop off the top of the Muur and through a bizarrely ornamental garden before picking up the road to the Bosberg and last climb of the day. 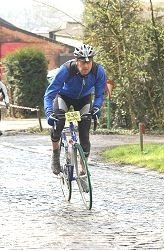 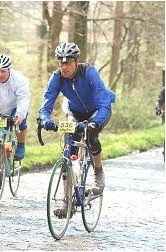 Whilst the Bosberg is not steep it is still cobbled and is a killer after all that has been before. Photographers wait to catch your 'death mask' grimaces as your legs finally give in and it becomes a battle in your mind to get to the end of the trees without grinding to a halt. I had given my all on the Kapelmuur and the sorry remnants left just about got me to the top without embarrassment. The run in toward Ninove and the finish is fast and twisty and me and Gary enjoyed picking off slower groups in a final push to the end. A drag up through the official finish and grandstands topped off a superb ride of around 6 hours or so. Epic indeed.
Next day we bailed out of the early start and group coach slog around the pro race (good call Winkie) and took a more leisurely train ride to Geraardsbergen to catch the action. Souvenir stalls, frites and mayonnaise and a walk up the cobbles to relive the previous days action led to the inevitable Flemish smoky bar and a grandstand view of the action on tele. After meeting a loquacious Italian on our shared table, whom we nicknamed Asterix, we got into the action on tele and absorbed the atmosphere of watching the biggest race in Flanders, in Flanders and in a bar on the race route. As Stijn Devolder did his thing on the Eikenmolen and went clear, we rushed outside to see him him power into the market square and on to the Muur proper. Back into the bar for the nailbiting 'will he wont he' finish (my legs hurt in sympathy watching him grind up the Bosberg) and his triumphant ride up the finish straight in Ninove. A bar full of Flandrians (and a couple of Brits and Italians) went mad for a Flandrian winner who had appeared the strongest all race, eclipsing even his team leader and Belgian demi-god, Boonen. 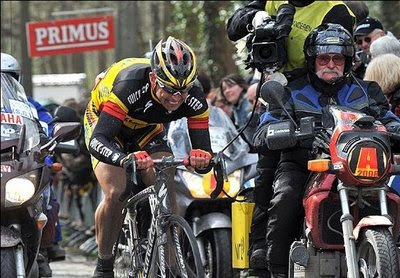 Asterix by now was so pissed that he tried to gatecrash the VIP tent opposite, which was full of haughty models and suits, armed as he was with an enormous bottle of potent Italian homebrew/potion of indeterminate origin under his coat. He had previously tried to engage us in the drinking of this potion, a feat we politely declined. The final hurrah of the day came as we staggered onto our tour bus, stinking of booze and fags and only 15 mins late for the rendevous. Yours truly had to do the walk of shame down a packed bus to the only seat left on the back row, past a sea of less than cheerful souls who had been up since god knows when and simply wanted to get home and off that sodding bus. Shame personified. 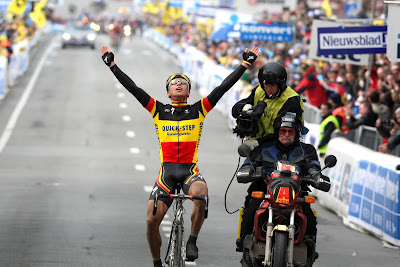