I did not have high expectations for Sunday's League race at the evocatively named Pignut Hill, Northwich. I had been running around doing something every night that week, whether kids activities, shopping or Bonfire parties and had had some late nights too to fit it all in. An inpromptu meal and wine thing with friends on the Saturday night meant I was ill prepared, under rested and feeling a little jaded.
No matter, I am in this for fun, right? So the trek to wealthier climes in Cheshire was made with dire forecasts of gales and rain for the day - perfect cross weather. I like Pignut Hill as a venue - parking close to the course (though the carpet of glass from the car parking till the playing fields start is a puncture nightmare), it has a nice atmosphere in and around the woods and the course is a good cross course with a mix of open grass, tight turns, a tricky descent and single track and that rarity of modern cross, some running. Recent rains had turned what was normally a fast early season race big ring course into a real test of mud plugging and staying upright on slick corners. A course made for Dugast Rhinos and low low pressure in other words (as was proved by visibly better traction than many around me during the first lap). 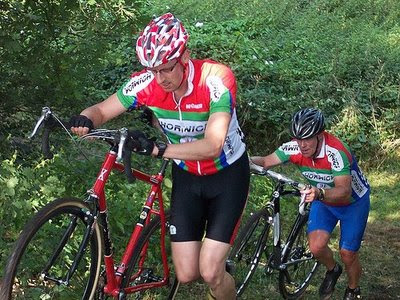 Pignut Hill in a sunnier Sept 2006

The new gridding arrangements in the NW League have had the effect of sticking me way down the field compared to the people I am hoping to race against due to my pathetic number of events completed so far. All my targets started front row, whilst I was relegated to 3rd row. Inexplicably I got a good start, blasting around the outside of a wet and mud-spray hampered pack. Not even a flying fist sized clod of earth hitting me square in the forehead dented my progress and as we entered the course proper I was up in the top 15 and with my Vet colleagues in easy reach.

What happened next was decidedly unexpected - I began to race and make progress up the field. Making junction with the first 4 Vets, I began moving up toward Mick S and Dave H, the leading Vet contenders and toward the top 10. This was not what I had planned, but I felt good, dare I say even riding within myself. Mick attacked hard on the run up the bank and over the top and I decided to go with him - I got a rapid reminder of how cross is about getting to your max level and pegging your effort just below it. What had felt manageable in terms of effort suddenly bit me back as I went a fraction over my limit and had to take it easier for a short while to recuperate. (Note to self: practice punching hard and getting back up to speed again after dismounts or corners). No matter, I didnt fall apart and was able to pick up the pace again and began closing in on Mick. It was either lap 2 or lap 3 - my pace wasn't so easy that my brain could actually count through the oxygen deprivation........
What happened next was even more decidedly unexpected - my rear mech destroyed itself in a blaze of glory, pinging jockey wheels and springs all over the little tarmac climb after the S bends. I had just passed the point where my spare bike was stashed and was faced with almost a full lap running with a mud-heavy and disabled bike. All hope of a decent finish disappeared in an expensive moment of aluminium fatigue. The decision to bail out came fairly quickly after running for a few hundred yards, but has been the subject of much soul searching since - should I have soldiered on bravely to finish unbowed but much further down the field? Probably, but I was so pissed off and if truth be told couldn't be bothered either with the running, or the cleaning of the second bike just to get to the finish. Falling asleep that night it suddenly dawned on me that perhaps I could have reversed my steps backwards around the course to get the bike running only 10% instead of 90% of the course - I have it in my head though that you are not allowed to do that. (Note to self: check the rules about pitting and the like). It was interesting that although that had never happened to me before, there were a few other similar casualties with the same problem before the race was finished.
Before I am judged too harshly by anyone for giving up, I would like to say in my defence that my fall back position was as team helper so I spent the rest of the race washing bikes and pitting for Dave B who had a fine race to finish 3rd, and some distance up on his nearest overall rivals.
So I am left with a somewhat caged pent-up feeling - not properly tired from a good race, and hoping that this form was not a flash in the pan and is the beginning of real progress. I will have to wait till 2 weeks time to get an answer, but at least I have time to build on some of the sessions that seem to have been working for me over the past weeks.
Posted by crossjunkie at 10:16