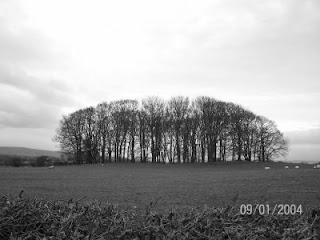 Trees near Waddington
I was surprised to see that this English language classic (from Alan Sillitoe) is still on the GSCE list - I remember it clearly from school and whilst I picked up relatively little from it that stuck after leaving school, I did identify with the notion that Smith the central character/narrator uses the space his training sessions give him to think, dreaming up a way in which he can subvert the 'authorities' and get back at them.

I am far too conventional and have insufficient energy to engage in such subversive activities, but I did settle on the concept that long training sessions are good for head space, if not creative thinking. As I do 99% of my training alone (not though choice but through having no training partners within easy reach or on a similar domestic schedule to me), the rare treat of a 3hr ride is a gift for cleansing the soul, if not a muddled head.
Duly fired up by the notion of epic Rapha Continental rides I have been following,
http://www.rapha.cc/continental/index.php?page=431
- gentlemen's rides with style and substance - I set about recreating my own mini epic ride last Sunday.
If truth be known the only thing epic about it was getting up at 6am and leaving in the dark before any other fool was up, but I took a camera to record the event and anything I encountered on the way. I also decided to forego the shot of single malt that appears de riguer with the Rapha clad riders, and lone Assos shorts betrayed my devotion to the Rapha Continental concept. Setting off into the gloom I headed out of town and toward the affluence of the Ribble Valley. I was hoping for a dramatic dawn but all that happened was that the light levels slid from dark through varying shades of grey into a gloomy day. 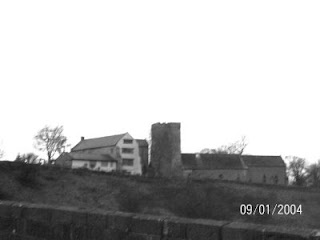 The Ribble Valley is full of beautiful buildings (Great Mitton Hall and the adjacent Church above dating from the 13th Century or thereabouts). It has a great sense of space too, whether along the river flood plain or on the moors that ring the Valley on most sides. 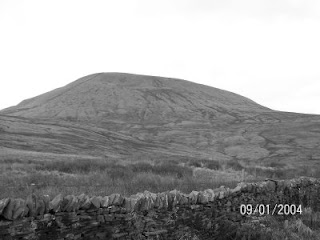 Pendle Hill was a feature of my childhood with long summer holiday stays at Grandparents in nearby Yorkshire overlooking the distinctive profile from the North. My ride skirted round Pendle from Whalley, to Bashall (known to those who road race locally) and onto Waddington, Chatburn and Downham. The climb up from the old school Hovis advert that is Downham Village, over the shoulder of Pendle brings great views of the 3 Peaks (and a vague connection for this post with all things cyclocross) before a rapid descent back to the gruff post-industrial landscape of East Lancs.

Soul cleansing stuff indeed, made all the more pleasurable by an afternoon ride with J on his new Birthday 24" wheeled 'proper cross' bike through the local woods. It's good to watch kids on bikes sometimes - no concerns of gearing, tire pressure, fitness and form or results. Just the pure, unadulterated pleasure of riding a bike outdoors in the mud.
Posted by crossjunkie at 14:37

By strange coincidence, I did my first long-ish ride for a while the other day over that way. Used the trip to see my mum in Kiorkby Lonsdale to get 60 miles in - virtually all into a headwind - via Ribchester, Bashall Eaves, Trough, Jubillee tower. I wish I was about 20 minutes cycle nearer to Bowland - it's a drag getting through Accy and Great Harwood.