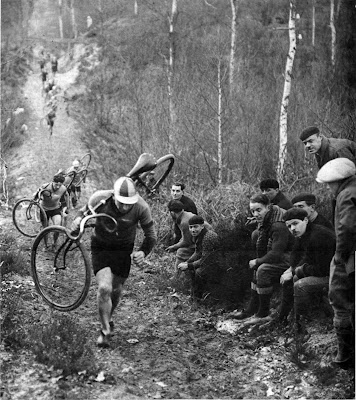 Simon Burney's seminal book Cyclocross Training and Racing first appeared around the same time that I got into cross. It became my constant companion and I pored over the pictures of David Baker and his steel framed, Mafac braked, Barum tubbed machine, eager to glean any information about technique and style. The pictures of an unrecognisably muddy Beat Wabel, Dieter Runkel with Look pedals and Adri Van der Poel hinted too at the glamour and power of European cross with its huge crowds and big money, a far cry from the anonymous NW League with its group of friendly diehards that I was beginning to get to know and race with.
As a keen novice, I was also wanting to know how to train to master this exciting new sport (I had previously enjoyed off-road running in its various forms). That first edition of the book left me strangely disappointed, as though I had plenty of time and enthusiasm, it did not seem to deliver more than generalities and not the definitive training sessions that I was looking for. To be fair that was as much about my lack of experience and knowledge as any shortcomings of the book, but it was with satisfaction that I discovered the latest edition had been updated to include detail and generality alike as well as further sections on indoor training and other complimentary activities to build into cross preparation. Trouble was, now the book really delivered, my time had evaporated with the family/work/bike teeter totter. No matter, this post and subsequent ones will look at some of the training techniques and tips that myself (as a previously successful rider still trying) and some of the existing successful NW riders employ to get them round faster on a Sunday afternoon.
I offer up my own training thoughts, not as someone enjoying great success but as food for thought for someone in a similar position to me but perhaps with greater talent........... I found it easy to slot back into cross as a form of competitive cycling after a 12 year layoff, as it is still possible even with advancing years and little time, to train and race in this discipline without a huge commitment of resources (excluding my tub collection!).
Preseason preparation for me consisted this year of a couple of long spring and summer sportives, a half hearted attempt at a local series of 10 mile time trials late summer and some techinique specific cross sessions. Oh and a bit of running. Hardly ideal for a cracking start to the season, so for a more effective and comprehensive approach please watch out for a post soon looking at top NW Vet Mick Style's build up and training.
Now the season has begun, my weeks tend to take shape around the need to get in a couple of interval sessions (1 on turbo, 1 off road circuit), a run (or two), plenty of rest and some limited steady riding. Usually interval days are Tuesday for short sharp intervals and Wednesday for longer threshold type efforts (often off road). That is the theory at least, but I can honestly say that trying to follow any exact schedule is pointless for me. At any given moment, fatigue, work, kids, apathy etc can get in the way, so I pride myself on being flexible and simply fitting in training where I can. I get the most benefit from the few 2 session days I manage, either riding to and from work, or with a run and a turbo in the same day. Total time - usually no more than 1 hour per day, about 5 hours per week. Not enough to shine in National Trophies but enough to have fun, of a weekend in the League.
Favourite sessions giving me the most bang for my buck:
30 sec on 30 sec off turbo in 10 min blocks - 2 or 3 blocks if virtuous or not too sweaty! Mimics that on-off burst thing in cross.
Pyramid intervals on turbo - starting at 1 min and adding 30 secs up to a 3 min max, then back down again. All with 1 min rest.
2 or 3 blocks of 10 mins at race pace on a race replica circuit near work - runs, technical sections, climbs and mud.

The keen eyed will notice the lack of base in there as the hours are low, and even in the off season I rarely ride for more than 1.5 hours. It probably holds me back to be honest, but maybe as the kids grow older and look after themselves more and don't want to hang out with boring Dad, then I will get out more.
Posted by crossjunkie at 10:41