a day out at the nationals part 1

The big freeze was having its final fling as I drove over to Bradford for the Saturday racing at the Nationals. The car display read -3 degrees through into Yorkshire over the moors and only warmed up on arrival at 10am to 0 degrees. The forecast was for a thaw though bringing interesting conditions for a Nationals.....

Meeting Dave H from the club I grabbed the opportunity to ride the Nationals course in the biting cold - fast, flowing, cambered and engrossing. The surface was solid but rutted in places where practice laps had previously taken place in warmer conditions in the preceeding days. A good day for file tread? But only if if the temps stayed that low otherwise Rhinos seemed a possible if unlikely choice as the subsurface stayed hard but a slick top surface developed....
I was pitting for Eric T in the Vet 60s and Dave in the Vets and it turned out to be the most relaxed days pitting I have had - no bike changes, no washing and certanly no dragging around pressure washers and barrels of water. Instead it was a question of standing around, shouting positions or time gaps and watching some great racing and performances.
Eric struggled with the cold a little and the blisteringly fast 50+race but finished well up there in 7th in his age category a couple of minutes off a bronze medal. Ian Wright demolished the field to win easily in the Vet 50s with an illness affected Roy Hunt only managing token resistence before pulling out.
The Vets race was a corker - made all the more so by Steff from the club joining us in the pits to support his mate Noel Clough who was one of the big favourites for the title (who had arrived somewhat late after ending up in Halifax). The conditions had thawed a little and with traffic the course was becoming slightly softer - it was noteworthy that Chris Young and Cloughy amongst others had opted for Rhinos. Chris got the fastest start I had ever seen him have and there was consternation in the Clough pit as he seemed a little off the pace in the opening lap. However he got going and me and Steff spent the rest of the race checking the gap which was pretty consistent at around 12 secs. Not even a late charge from Chris Young put Noel under pressure and he blazed around to a well deserved title. 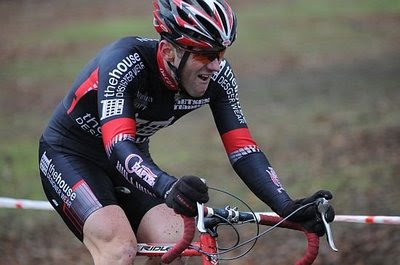 Dave H also had a great race, benefiting from a Belgian extravaganza of racing over the New Year period, ending up 23rd, not far behind some classy riders from yesteryear and some good riders from the present.
NW local Johnny Mac had an unlucky race crashing twice in the U-23 as the conditions became really slick and simply couldn't get back on terms with David Fletcher. He was later rewarded though with a Worlds trip to Hoogerheide this month.
Posted by crossjunkie at 15:16