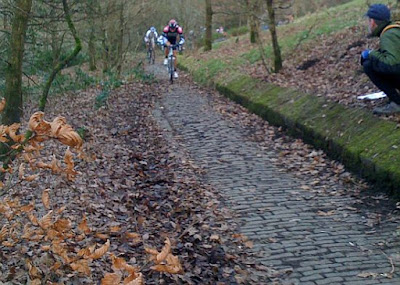 Photo: Jonathon Watson
This was 15 mins away for me so a no brainer, particularly as J could ride the under 12s and go home with mum and leave me to ride home after my race.
Personally I think cross made a triumphant return to Tod, and even my return to racing had a vague sense of Hurrah to it! Chipps Chippendale (I kid ye not) had organised a tight race with a good course and the field of 108 showed the crossing public's approval. J came with 2 friends and they all rode the under 10 race, and friend Mark came to ride his first bike race in at least 15 years.
Kitting up in the car park beforehand there was a bang like a Chinese Mega-Firework followed by a sheepish Paul Warrener (Rossendale RC) looking for a spare front wheel. I had one free (as ever) and happily handed it to him. After 30 seccs or so, my brain computed a possible problem with this and I quickly checked with Paul how much pressure he had been trying to put in his tire.
The answer of 80psi came as a bit of shock, mostly because I had just handed him a handmade FMB Superprestige tub that would cope with say 50 at most. Hurried assurances were sought from Paul that he would not re-attempt the inflation process at his normal levels with my tub. Danger averted, I took to musing about how on earth he managed to ride anywhere in the mud with 80psi. Anyway, as his own admission of being a roadie showed, it takes all sorts................. 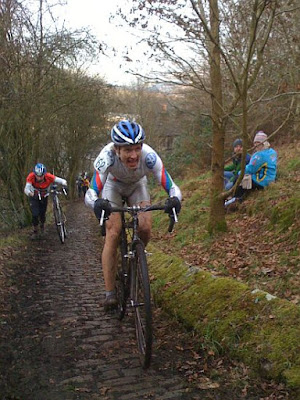 Back to the racing and after a fast start I found myself well up the field containing lots of Yorkshire riders and some other big names warming up for the Nationals. Up and onto the cobbled climb and a slight problem emerged. I had ridden this in warm up OK as I had a large cassette on in anticipation (I remembered it from racing there years ago). However with the full field on it, riding was impossible. Unfortunately so was walking as the cobbles were as slippery as ice in my shoes! Having removed studs from the shoes to make them easier to walk in, I then wanted them back in to try and hook the edges of the cobbles and get purchase. 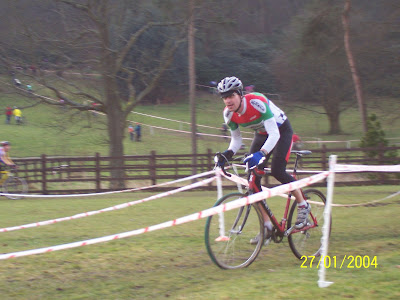 The course was flowing, mostly fast up or down and with some fab sweeping, slippy bends. Mick Style came by after 10 or 15 mins - nice to reinstigate our mid race meetings once again. He pressed on and after a couple of laps I couldn't see him ahead anymore. Ian Bibby came through to lap me, riding a steep, muddy climb that no one else seemed able to ride. Chapeau. Few other riders seemed to pass me and I was happy to finish up 34th out of the monster 103 finishers. Mick rode well for 22nd, Anthony Morris back on form with 15th, Rob Pugh in 12th and Dave Haygarth a cheerful 8th behind the hotshots and the Wheelbase crew. Chris Young beat Noel Clough - a sign of things to come in the Vets race at the Nationals?
Posted by crossjunkie at 10:40

80psi might have worked a treat on those cobbles as long as it was high pressure helium. Glad you seem to have got a bit of form back - a good ride.

Glad you enjoyed it. Don't worry, I don't think I could get away with NOT running the race next year, so you'd better dig out those toe studs and climbing shoes...

Would you link to my blog by all means?

In addition, I come to look.