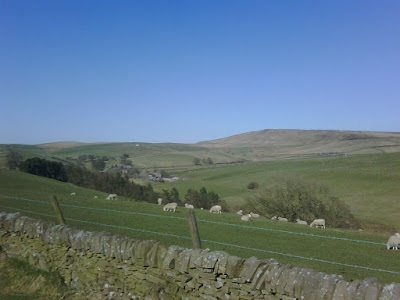 I'm never a big fan of large organised group or public rides - partly because I am not hugely sociable (a 'sociable loner' like Robert Millar?), partly because I am always (unnecessarily) slightly nervous riding in a large group and partly because I like to do my own thing. I ride on my own almost exclusively and it is strange though almost always pleasant to have company from time to time. Whilst Flanders with it's 17,000 riders was a little excessive, the sold out 1600 strong Cheshire Cat sportive promised to be reasonably busy. However, there was a group of old and new friends meeting up to ride together and this was for me the raison d'etre for the whole affair. And the chance to do my first century in over 15 years.

Leaving aside any puns about weather, smiles and the Cheshire Cat, it was a stunning day. The sub zero temperatures on leaving home with Mark warmed up slightly to leave a cold but cloudless day with sunshine for the whole event. Sometimes warm, sometimes very cool, it was a perfect, indeed rare spring day made better by a great route maximising use of quiet Cheshire lanes and hilly Peak terrain.

There were the usual groups coalescing and dissolving constantly for the first flat miles as people found their pace and we managed to stay pretty much together, regrouping at the first 2 feed stations. The route was nicely judged as it turned from the flat Cheshire Plains and headed toward the hills north of Stoke and the eponymously named Mow Cop Killer Mile. Coming soon after a feed station, it was a bit of an effort to get going on this but it was fun heaving up it's 1 in 3/1 in 4 gradient and Ella (4) loved the celebratory medal given to those who got up without a foot down, and passed onto her when I got home. 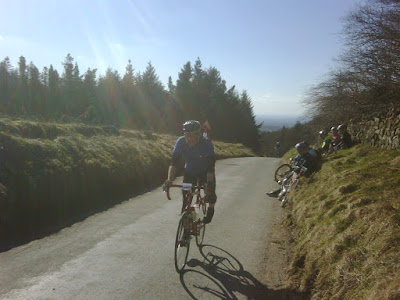 Mark at the top of Macc forest
From then on the route became more like the terrain myself and Mark are used to riding in, as the hilly edge of the Peak made itself known, north of Leek. The section toward and out of Macclesfield was sublime in the Spring sunshine and the climb up through Macc Forest was harder for me and many others than the Killer Mile itself. A final effort up the Swiss Hill cobbles in Alderley (easier than the Paterberg in Flanders?) led to a flat run in as I towed Mark to the finish. He'd only been riding and training for 3 months prior to this 100 mile test and finished in fine shape considering the minimal preparation undertaken. Onwards and upwards!

I was trying out road tubs for the first time too and whilst comfortable gluing and riding cross tubs, was wondering how I would get on. I needn't have worried - they were extremely comfortable and trouble free, and the braking with road calipers and cork pads really progressive. I had 2 forms of puncture solving technology so although this aspect went untested, felt reasonably reassured that I would be able to continue in the event of any trouble bar a big tear or blowout. Seeing as I dont carry spare clinchers either that would have been game over whichever way.

Fred Whitton is the next stop, via an unoffical Lakeland Loop next month, so time to get serious on those miles and those hills.