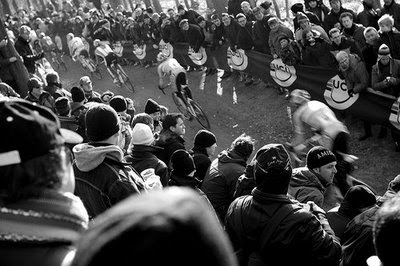 I know we've long finished getting muddy of a weekend here in the North West, but the real cross season (at least in Euroland) finally spluttered to a halt just over a week ago with Sven Nys taking 3 out of the 4 big post worlds races. Niels Albert and his new rainbow jersey was there or thereabouts in all of them but only picked up the 1 win along the way.
I managed to acquire and watch around 35 Euro races over the season (thanks Ed in the Netherlands) so feel qualified to make a few observations about the state of cross in the motherlands......
Over the season it was clear that Nys has lost little of his dominant strength and power, picking up the World Cup, the GVA Trophee and the Superprestige titles with a season long show of consistency. He did not have it all his own way though as both Boom and Albert peaked at specific points and were able to beat him several times. What has changed though is that the races are generally closer and not the (too) common Nys solo efforts to win from early on that were actually a bit boring to watch. Bart Wellens appears no longer to be the force he once was and entertains spectators mostly with gritty comebacks into minor placings from the regular shocking starts he seems to get. Those Flandrians love a fighter and he fulfills this role handsomely, though not too successfully in terms of actual wins.
Nys is clearly far from finished and justifies his position as highest paid rider, even if that has caused some ructions along the way around start monies and made life a little harder for some of the more lowly pros on the circuit.

Boom says he has given serious cross up and has gone to the full Rabo ProTour squad to ride the Classics and some stage races. Apparently a petition has started in the Netherlands and in Belgium even(!), to bring him back. Don't hold your breath though. It falls to Albert to take up the fight against Nys for the next year or two, though Thys Al has improved loads this season and may yet get stronger and stronger. Just ignore Nys comments about a combined cross and mountain bike world cup lasting most of the year and with both discplines to count toward a final standing - sounds loopy to me but maybe it is the future of cross to bring in a different audience from a different discipline?
Time will tell but for now I can't get cobbles out of my head - I watched Omloop Het Nieuwsblad (Volk) and Kuurne-Brussels-Kuurne over the weekend. Just when cross finishes, those crazy Belgians plug the gap with cobbles, bergs and more gritty, muddy racing. Class. This time of year belongs to the Flandrians and I can't get enough of it!
Even the Spring Classics outside of Flanders still feel Flandrian on account of the huge numbers of crazy fans (at Roubaix, Liege-Bastogne Liege, Amstel Gold etc), with the exception of Milan San Remo which feels surprisingly Italian for some reason......
Posted by crossjunkie at 20:08