dénouement (IPA:/deˈnuːmɑ̃/) consists of a series of events that follow the climax of a drama or narrative

As I was chatting to a friend I hadn't seen for nearly 20 years at the end of the Fred Whitton, he astutely remarked that for him, riding this type of event led to a gradual release of memories and experiences over subsequent days and weeks, one that sustained him for some time, after the physical memories had gone.

This chimed well with my previous experiences too - though I still have some very physical reminders of my day out last Sunday. The denouement started at Cockley Beck as I fell apart in the cold, hail and rain after the brutal effort of Hardknott, continued with an anti-climatic finish at Coniston and rumbles on this week in the aftermath. I won't attempt a blow by blow account of the ride, others have been there before more graphically and accurately than I can achieve. For me, the Fred was a series of snapshots along the way that are gradually coming together in my head to form a definitive narrative:


the loneliness of riding 8 hours with 1100 people and chatting to only 3 at any great length. Must work on being more sociable.......

catching the tandem train into Keswick - wow, those things go fast down hill

carnage on the first 25% ramp up Honister

relief on being in one piece at the base of Honister compounded by the mirror like beauty of Buttermere - sublime.

a chat and thanks from a lovely woman for keeping her safe on the narrow, car laden descent from Newlands to Keswick. She dropped me like a bad habit after Lorton - strong.

delight at seeing friend and NW Cross Vets champion Mick Style, only for me to immediately crash heavily off the 1st right hand hairpin off Kelton Fell down an embankment and into a large bramble and nettle patch.

the painrelief from aching arms and shoulders afforded by a huge release of adrenaline after crashing.

the subsequent collapse in energy as the adrenaline wore off.

Jebby and Dobbin dancing on the pedals in the big ring at the top of Cold Fell.

riding into Mordor (as http://irontwit.creativeblogs.net/ so aptly put it), as I headed up Eskdale into the impending storm above Hardknott.

being interviewed riding the 30% ramp on Hardknott - are you serious?

fear down Hardknott and Wrynose - 1 crash was enough already.

numbness through Little Langdale, I just want to get home and warm again.

resignation on missing a sub 8hr ride - do I really have to come back again?? 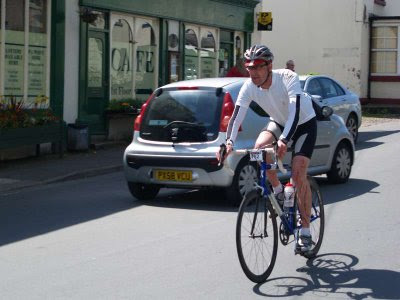 I had delusions of grandeur really - a sub 7hr Elite time was achieved by many superb riders, but in realilty is not a remote possibility for me. I wanted 7.5hrs but the Fred humbled me as it should - it's not a ride to be trifled with. I emerged, cut and bruised but with a new and sanguine (no pun intended) appreciation of why it is one of the finest one day challenges in the country.

The next challenge is this weekend - a Charity Coast to Coast, Hull to Liverpool over 3 days and using 2 wheels, a kayak and my running shoes. Post later in the week.

Many thanks for all your kind words and comments. Appreciated.

Great post. Thanks for the link. I too thought that the descent from Newlands was the hairiest bit of the route: quite fast yet some very narrow sections. I just missed out on 8 hours, so I guess I'll be back, too.

Nice one Al! There was me thinking you cross riders had superior bike handling skills ;->