in defence of tubs 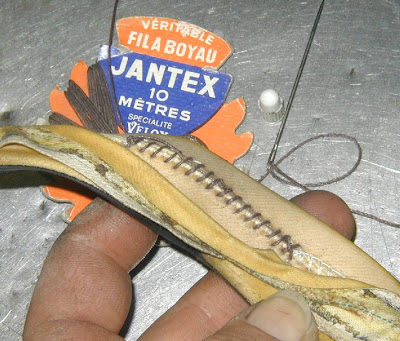 I thought I’d try it this year – what with the experience of a couple of seasons of cross, and a move toward purity of approach for some big sportives, going down the tub route on the road seemed to make sense. Besides, it was no longer making sense to be using a nice pair of deep dish carbon wheels to be ground down and bashed chasing lowly places in NW Cross League races.
Years ago, racing cross in a past life, I flirted with the concept of tubs, getting hold of some ancient Barum and Vittoria’s. I never really got on with them, preferring the dubious clincher treads that were out there at the time. It was a beginner’s mistake – finding the preparation and gluing a hassle and never really getting to grips with the correct pressure.

After my lengthy break from cycling and with a renewed passion for cross, I gave it a whirl again. With advancing years came increased patience and a desire to do the material justice. Cheap tufos soon became obsolete in favour of my first pair of Dugasts and then the obsession was born. Taking heart from blogs across the Atlantic, gluing became a ritual accompanied by specially searched for exotic Belgian beers and authentic Euro cross races sourced from the newsgroup I began subscribing to.

Whilst gluing is still time consuming, its methodology and rhythm merely add to the overall experience before the tub has even been ridden. Then there is the endless (internal) debate about matching pressure to conditions and surface to come.

In short, I was a convert and a zealous one at that. Road tubs were another matter though………

Feedback on forums and websites was almost unremittingly negative and gave the impression that only someone with a ProTour contract should even attempt to consider racing with tubs on the road. Given I was not road racing, I turned to the sportive community to find the same disparagement – except for the lone voice of Dave Lloyd over on the cyclosport forum. Too fiddly, prone to rolling, nightmare if punctured – all the same negatives that clincher cross riders come up with, none of which had previously bothered me with cross tubs.

Never one to take well meant advice to heart (ask my wife) I ploughed ahead and got some Continental Sprinter Gatorskins, mainly because of their alleged puncture protection and mesh sidewalls. Not wanting to be caught in a remote area with a long wait and grovelling phone-call to a significant other, I also invested in a spare, 2 cans of Vittoria Pitstop and removeable valve cores to allow adding DT tubeless sealant as well. Three methods of puncture repair security, just to make sure.

My lovely carbons and Sprinters have now taken me round the Cheshire Cat, Lakeland Loop, Fred Whitton, Coast to Coast Challenge and numerous other training rides without missing a beat. Well, except when they skipped and skidded and deposited me in a bramble patch on the Fred……..

I’m sold in short – I was anyway with the cross tubs but riding tubs on the road, albeit some slightly utilitarian ones has been a joy. Smooth, fast and very comfortable. So embrace the glue, organise your puncture repair and get back to basics – you’ll love it I promise. 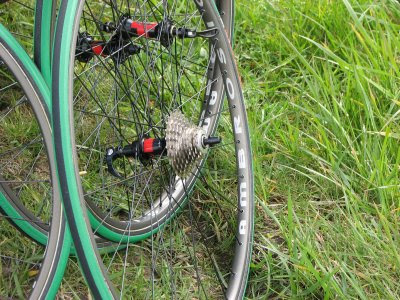 In the meantime I am excited to report on the forthcoming inaugural collaborative ride between http://herecometheblegians.blogspot.com and http://crossjunkie.blogspot.com, tomorrow morning and taking in some of the finer cobbled sections of the Ronde van Oost Lancashire. Report to follow plus some exciting collaborative ventures in the pipeline, I hope.
Posted by crossjunkie at 12:54

You're all heart and sentiment.
I didn't read a reason why you should use tubulars on the road.
The advantages of tubulars are low pressure and pinch puncture prevention - possibly rolling resistance. Absolutely none of these kick in when you're running a good tyre at 130psi.

I, like you, love the thought of using my carbon hoops in the summer races but when I did, with some expensive corsa cx tubs ont hem - last year - I found them dull and fairly lifeless on the road - and much preferred some (GOOD!) clincher wheels.

(I did prefer the look of my carbon tubulars though... and that's important, of course!)

Its the flat in the middle of nowhere that puts me off tubs for road use.
I can't see why this would be a problem for CX though. It's not as though you're ever more than 20mins walk back to the start/ your car.

Aargh - I've been found out. It's all been about style over substance. Deep dish carbons just look too bling to be ignored on the road...........

The mending bit is the problem with the cross puncture but Pete Burgin runs a superb service to get you up and running before the next weekends races.