What do Eddie the Eagle, Fasuto Coppi and cyclocross have in common?

The answer lies in the murky tale of the ‘maglia nera’ or black jersey - the antomym creation to the ‘maglia rosa’ pink jersey of the Giro D’Italia.
Viewers of a certain age may remember our Eddie at the 1988 Winter Olympics, pride of a nation with little to celebrate in a post Falklands, post Black Monday, recession dominated landscape:

Eddie’s complete inability to compete at the sharp end of the competition won the hearts and minds of the public, so much so that he managed to crack the Top 50 (no less) with ‘Fly, Eddie , Fly’ and amassed a fortune of £400k within a year. True to form he was bankrupt by 1992.
Luigi Malabrocca was the Italian Eddie during the late 1940s, though to be fair to him, he exhibited considerably more ability and flair than Eddie ever did in his chosen sport of cycling. His claim to fame centred around his singleminded pursuit of the ‘maglia nera’ awarded to last placed rider in the Giro between 1946-1951. His dedication to the cause of winning (albeit a slightly different version) mimicked that of a certain Texan cancer survivor – there was no end to the ruses he dreamt up to ensure his ownership of the jersey for slowest rider in the race. From playing hide and seek, performing long bar crawls, self inflicted punctures, feigning illness, there was nothing this performer could not turn his hand to.

Distressingly, he actually only won the jersey twice out of 3 attempts as his particularly inventive blagging one day in the '49 Giro led to the time keepers becoming bored and leaving in disgust, only to award him the same time as the bunch and gift the jersey to a co-competitor, Sante Carollo. It tickles me that there were more than one of them vying for the honour.
Then again, that is to underestimate the honour of the maglia nera, and explains why the Giro still recognizes the jersey with a black number, the jersey itself now being deemed to have negative connotations.
Whilst he never tried for the jersey again after the debacle of ‘49, Malabrocca had more success in cyclocross. He was Italian Champion in ’51 and again in ’53 and apparently exhibited some flair for the dark art. So much so that he became affectionately known as the ‘Coppi of Cyclocross’. History does appear to record what Coppi thought of the moniker nor is there much evidence of the great mans involvement in cross some years before. Italy first had a National Cross Championship in 1930 and some Tour riders of the period liked to keep fit in the winter through cross racing – a better placed researcher than I may be able to uncover Coppi’s involvement or not. 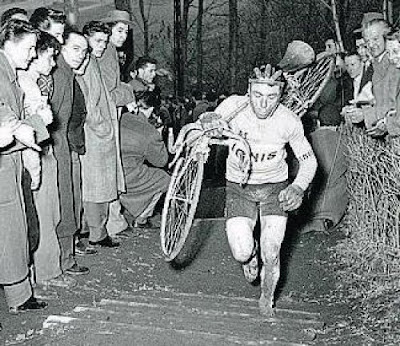 But for now, I like the image of this celebrated failure turned cross champ and his hard earned maglia nera, floating stylishly across the fields like a Coppi of the mud………..
Posted by crossjunkie at 13:42

I would suspect that Coppi didn't do much cyclocross given his reputed fragile physique - the rough and tumble would have been a bit risky for L'Airone.