Racing at the delightfully named Boggart Hole Clough last Sunday, I realised just how much I still had to learn about the artform that is cross. From the handlebar banging shenanigins (of which more later) at the start, to the endless chasing of brethren from Liverpool, the race provided a rich seam of experience.

Funny, as I have ridden a fair few cross races over time, but the combination of a gloriously varied and challenging track with older but wiley and strong opposition combined to put one over on me - in a way that just left me wanting more.

Former National Cross Champion and double 3 Peaks winner Nick Craig, has oft been quoted musing that cross is his favourite discipline because it is not exclusively the fittest rider that wins, but often the one that shows the most guile in the dark art of cross, rather than bike riding. I have paraphrased him somwehat, but you get my drift. 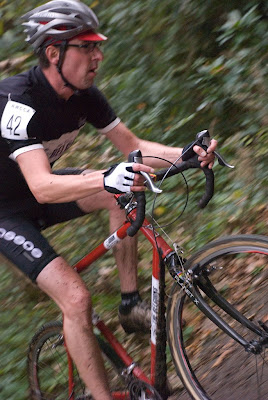 Pic: Richard Weltman
I love these North West League races - they are full of battles within battles, right the way through the field. Riders come back week after week, not hoping for a win or to be top in their age category, but to beat their nemesis from the previous week, to keep it going for a lap or two longer before being lapped by the leader or a team mate, to finish in the top half, third or whatever of the field.

And this is why I love cross - none of road racing's being dropped on the first lap and slinking back to the changing rooms rather than ride in anonymity and isolation around the course. No lonely furrow, against the clock and the inconsiderate drivers with a roundabout (for crying out loud!) to spice things up. No sir - cold hard racing from gun to tape, at our own level but in company and with encouragement.

In the end at Boggart I was undone by a crafty rider, older and wiser, though to be fair with sronger legs too. Ray provided me with a great 40 minutes entertainment once I had caught him after the melee that was the start. Attacking me up the tarmac climb every lap, I would claw him and his team mate back each time, about half a lap later. Then the process would start again, me sometimes getting away on some more technical sections to be pulled back and attacked again. If we were at the front of the race it would have been thrilling to watch - for me, positioned in the late twenty's out a of a hundred strong field, it was simply great fun. Ray's a bugger though - on catching me he would raise the pace again. It must have hurt somewhat but it sure demoralised me and made me doubt myself. He beat me fair and square, with strength of leg and character too. And I learnt some valuable lessons in the process. Cheers!

The handlebar banging was a relatively new one to me. Cross is competitive, sure. I want to improve as much as anyone else too. But for me, diving up the outside of the first bend at the start, cutting across to bang into me several times and nearly down me in the bunch inside, only to fade and go backwards half a lap later is taking things a bit far. I am to be fair a pretty meek soul, but it would be nice if riders who know they are likely to finish up mid pack or lower would let faster competitors get on with it at the start without forcing their way up and then getting in the way on the opening lap as their pace fades. There were several riders who fell into this particular category..... I was fairly well down too on this first lap but matched pace with riders in the top 15 quite happily for a while as I picked through the field.

I suspect there is the potential for some debate on this one, and given a wide field start then I have no problem with everyone for themselves. However we were gridded on a narrow tarmac climb and as an infrequent rider I have no right to the front of the grid. Neither too though have those who know they will be lapped by those around them later in the race but who still push to the couple of rows behind the front....

Let's see some some self regulation on this one to make it a better race for all. Insults, brickbats and other complaints to

Another great result for you Alan and this post summed it all up for me I am beating the times I get lapped,but maybe the courses are getting longer lol I am now in training for my home event.

Wow - what a tale. Lovin it. Got my bowels moving for sure...

The start is an essential part of 'cross Alan and people need to prepare for battle. Just as I push in front of riders way better than me whenever I can in after a lowly gridding in a national trophy race, so must you sharpen your knuckle dusters and get ready to elbow your way past people on lap one. It's just such an essential part of cross - make them come past you again - get on that wheel in front and make people earn it if they want it back!

It is a difficult question to answer and I fully understand Alan's point - why be at the front of the grid when you know you will finish mid or further down the pack?
However as Dave points out the first lap is a scrap and you must be prepared to defend your line to an extent.
I sat mid pack for the start and quickly passed riders further up the grid and got passed by riders who gridded behind me. I did think one guy on an MTB was out of line as he barged a lady out of the way into the first decent. I asked if she was ok then ran him off his line at the next corner - it was only fare!
What did amaze me was when someone tried to cut me up at a corner and then grumbled as I held my line and prevented him cutting me up.
What was good to see the riders who lapped me all thanked me for letting them past which I think reflects the sport in general.
We all have our aims mine for this season is only to be lapped by Alan once (100% so far) and now my new aim is to try to stick to Duncs wheel on the next race (just dont tell him).
The alternative is we form a protective barrier around Alan as leading Belgian and take out the competition on the first lap!!!

I tend to agree with Al - fair enough the opening lap in cross is a scrap but if the start is gridded then like Clint 'A mans got to know his limitations' don't push to the second row if you're not capable of sustaining the pace and are just going to become a mobile obstacle for riders behind. Aggressive riding with experienced riders is fine but it rapidly becomes dangerous with inexperienced/less skilled riders in the mix. Anyway Al 8th and 9th vet for the Belgians and I'm sure you were fading, at the end it was down to half a dozen bike lengths ;-)

As for handlebar banging - yep some daft buggers early on, one in particular would have ended up in the ditch/stream if a couple of us hadn't braked hard and then he lost all the places as soon as we hit a wider section!

Good point Rich,
so alot of this back when MTB started with guys hitting the front of he grid who really shouldn't have been there.
The only thing I could fault on Sunday (apart from my form) was the officials should have pushed back the guys who all came forward to the second row they called for the next ten and 30 guys went forward!!
That said two top ten places not bad in a field of 100 or so and 5 finishes for the belgians way to go

It was my 2nd ever cross race, really had some fun. I find the best way to avoid the carnage at the start is to start at the back and get to the first corner last. Gives lots of targets to catch throughout the race as well. Managed to finish 20 places higher than on my first attempt, maybe I'll be bothering the top 50 by the end of the season :)

Thanks for the comments and thoughts - keep them coming.

And thanks for the offer of 'protection' at the start! I think I'm with Dave H though - just need to tough it out a bit more and embrace a more gladiatorial style on starting...

I have to say my approach has changed from the first two races were I didn't push forward enough. On Sunday I didn't form an orderly que behind slower riders as I have in the past, a clear on your right / left did the trick.
It is a fine line between assertive and agressive riding, assertive I think is fine agressive isn't and can cause offense!

I think the crux of the issue here is that we are 'racing'... and with the vast mix of ability and fitness some people don't realize it's a race and others over estimate their ability, contributing to out-of-control riding which is perceived as aggressive and dangerous.

It's a difficult one to police, the genial souls will always take a step back in the start box yet have to work through the traffic after the whistle...and in doing so put a dent in their finishing position.

Perhaps, this post begins to formulate a HCTB race ethic: We will race you hard and fair. All we ask for is respect for all and a good clean fight.

With that I'm digging out the fullface BMX helmet.

I doubt we would be having this conversation in Belgium, where we would be expected to be defend your line through the corners...or the straights - youtube Ben Berden as an example.

Maybe something for the organisers to think about with ever expanding fields (especially once we release the HCTB hordes!).

My mistake was thinking my place was at the back with my heavy MTB stuff taht next time LOL.

If there's not a bit of Richard Groenendaal style argy bargy, it's not a proper cross race.
I'm yet to see anyone do this in a UK race though http://www.youtube.com/watch?v=rNVKeDfQu0k

Alan, just read your blog and it was a battle to remember as its great to have given your all lap after lap, and find competitors with the same spirit. I've just got some legs after my holidays in Spain, then the Peaks. The course had something for everyone, well done Mick. The start is an issue but I've found that starting steady helps the mid part of the race. When I was seeded higher I'd go off too fast and blow up. You usually end up where you should as the unfit fast starters always come back and disappear- someone should coach them better. Thanks again cross junkie- for the next time.