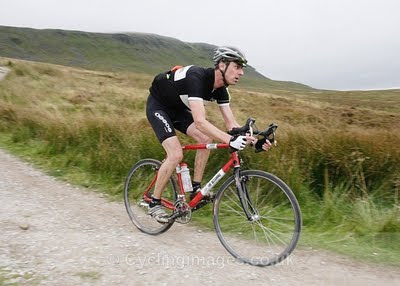 By way of tying things up a little, this photo of a tired, strung out Belgian and some other superb ones of Peaks riders on and off Penyghent, appeared after a little pause on cyclingimages.co.uk

The photos of the head of the race as the leading few riders climbed the track above the right hand turn up the escarpment to the summit are particularly good. They graphically illustrate the pain and commitment of riding high up on PYG, at this late stage of the race. The rest of field is captured concentrating and grimacing as they begin the long descent down.

I make no apologies for dragging up the Peaks again, a couple of weeks after things have moved on. I find myself in limbo really - the pain has long gone, the endorphin rush even more fleeting. But it is still there in my head. Constantly. I feel at a loose end and inextricably I find myself drawn to my nice new pair of Inov8 fell shoes, heading out yesterday from of my brand new office on foot and literally straight up the valley side via a disused incline from the quarry above - a replicant of a Simon Fell calf creaser if ever there was one. Next year, lunchtimes will be reps up this industrial age relic, trying to harden those quads up too with the bruising bike laden descents in between. 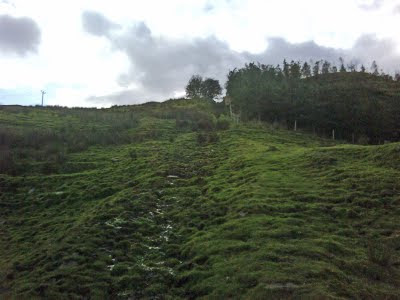 I can't settle entirely on cross either at the moment - I have some races planned in late October and November but the turbo appeals not a lot at this stage. It's the hills that are still calling, as Autumn sets in properly and the air chills down nicely. Having moved offices too (though only a couple of miles down the valley), I have set about exploring the secret places round these parts. A mini cobbled climb here and there and more importantly for now, a cross circuit in the woods and fields above the office on the other side of the narrow valley. I love nosing around, poring over maps, trying to ascertain what little secrets can be gleaned from the local area - a few lost lunchtime hours ferreting around to hide that hidden gem of a track, or climb. 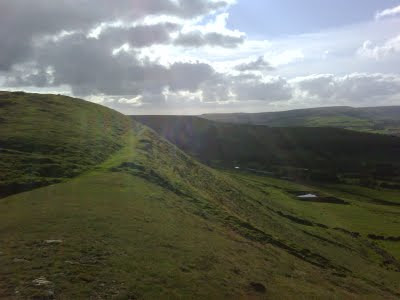 It really should be back to cross now - reps, intervals, drills. The formality of this style training has yet to fully grab me this year, a hangover from the off-the-wall style of riding that is represented by the Peaks, part fell-running, part mountain-biking, part cross. But it will come - turbo and all. Probably in a big rush too, if previous years are anything to go by.

Oh and after the honour of having a Peaks post printed in the official 3 Peaks Programme, a crafty collaboration between myself and another self-confessed Peaks addict should result in some printed matter over in a magazine on the other side of the Atlantic. We hope. More to be revealed...........
Posted by crossjunkie at 09:09