off the back a little

As followers of the beautifully stylish Velodramatic and Here Come the Belgians blogs will know, the sheer level of other commitments we all have can easily get in the way of a good honest post. Michael from Velodramatic nicely summed it up as being off the back of the race a little and struggling back through the cars....

No exception here with the life/blog balance resulting in a lack of posting (no claims to stylishness included). However, my priorities are in order and I have indeed been out riding veldrijd, in competition and in training. So much so, I thought it would be timely to revisit a post from last January looking at tubs, that bitter sweet obsession that graces this little corner of cyberspace.

Last Jan I directly compared the offerings from Dugast and FMB, something which garnered a surprising amount of interest based on a recent quick Google search and the number of times this post appears to have been referenced on forums, chatrooms and other cross based sources of dispute:

Judging by the number of visits from Canadian and US readers (indeed worldwide readers), it also spread the crossjunkie brand somewhat farther than I had ever intended - a welcome serendipity and the source of something to live up to.

I have been riding different tubs this year so far and thought it would be timely to present my truly scientific and statistically significant findings...........

Preparations for the monumental 3 Peaks Cyclocross centred around some new and relatively untested tires, all from FMB. The trouble is the Peaks is such a unique and unrepresentative race that all data collected by the event is considered null and void when it comes to more traditional mud based riding, over 1 hour and no rocks (well except at Otterspool). After the Peaks the FMB 34mm Fango Superprestige (sounds like a 70s Italian supercar) have been literally dusted off and relieved of their 60psi to be reborn at 30psi and liberally coated with mud round my secret wood spaces. The Challenge Fango itself (from which the FMB takes its tread) is billed as a mud tire. Despite the fact that FMB casings are much more supple and in the latex walled SP version, capable of running very low without folding over, I have to say I have been unimpressed. The tire that was absolutely superb on the road and rocks of the Peaks has not translated well at all to mud. It's sketchy in corners, causing some heartrate monitor bpm peaking moments, and failes to hook up well on the rear in sloppy, muddy grass. Big disappointment.

Or is it. Perhaps I am being too harsh here, as the Rhino and Green Michelin Mud with which I am comparing it, are true mud tires and this has perhaps cannily been billed as more of a cross-over tire - one to use in a wider range of conditions as pointed out by this article from Velonews. Either way, it doesn't compete with the best mud tires out there, perhaps more so in my FMB incarnation as there is apparently a noticeable and negative difference between the 34mm performance in mud and the 32mm, due to the way the side knobs are elevated on the bigger casing. Despite this, it has been in regular use in training as the less than perfect grip makes riding my more specific mud tires in races an absolute blast. 'For the technique, good is it.' - Yoda, Star Wars:Attack of the Clone Tubulars. 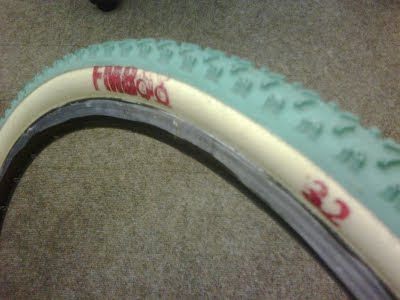 So what is working well this season then? Apart from the ubiquitous Rhino which maintains its spot as mud king, I am running a couple of pairs of old Green Michelin treads on either Dugast or FMB casings. I had hoarded some old Green Mich treads for ages (sending them off to FMB) and managed to pick up the Dugast conversions second hand too. Both work like a dream in the mud, feel solid through technical roots and the rougher sections and run fast on the tarmac too. Shame they are no longer available as I feel they rival Rhinos in the worst mud and handle everything else too......

A brief mid season break from racing is coming to an end soon (did I ever get going enough to call it a season?) and then it's back into the fray for some good solid North West events in November followed by a National Trophy round in December to really put me in my place. The standard of the Vets at National level is somewhat eyewatering to a keen but firmly amateurish enthusiast such as myself. However the turbo is busy, the secret cross circuits are being worn to their winter state and the booze is taking more of a back seat now. Onwards and upwards.
Posted by crossjunkie at 12:24

Those new Maxxis Mud Wrestlers look like a good candidate for the FMB treatment.
http://www.maxxis.com/Bicycle/Cyclocross/Mud-Wrestler.aspx
If they're anything like the MTB tyres they'll be brilliant. The shoulder tread looks pretty constant which should meant excellent cornering traction and the centre tread isn't dissimilar to a Mich Mud or a Rhino (to my eyes at least).