I blame twitter. Even facebook can't cop for flak on this one. This year, even more than last, there is a buzz around, soon to build to feverpitch.

#3peakscx and #3pcx are the culprits as various Peaks entrants hone their form and reach new heights of anticipation.

In amongst this, nay right up there in the thick of it, is myself, one of a merry little band. (Others include @tikahuna, @aviemoron, @twinklydave, @steverile, @PhilHaygarth and @Mr_Terrahawk.) @DaveHaygarth's preparations though are even better documented with public Peaks sessions to whip him into shape, expert as ever and given spice this year by a slightly tongue-in-cheek but still relevant weightloss blog.

Dave knows how to 'Peak' for this event like few others and will no doubt toe the line in top condition. As for myself, this could be the year, actually. By 'the year' I mean a good ride, sub 4 hours and hopefully without a grovelling crampfest. Well, at least not one from the base of the Whernside climb onwards anyway.....

More running, more running with the bike, more walking with the bike and even, dare I say it, more riding the bike full stop have pushed me into new territory weight wise (yes me too) and form wise. I'm still not going to threaten 3 and a half hours but for a domestically and genetically constrained 40something, I may just surpass myself.

I returned to the theme of my last post on Sunday morning. Nearly Saturday night actually given the 5.30am alarm call to get up and sorted to meet with the keen Wheelbase duo of Dave and Lewis Craven. 'Intervals on a 40min lap' Lewis called it. More sufferance then. Crawling up the steep uneven Simon Fell-like bank toward Whittle Cross/Scout Moor summit, I once again mused on what is required for the Peaks. The ability to shut out discomfort/pain for long periods, mechanical sensitivity to avoid breaking both bike and subseqently self, technical ability on skinny and unsuspended tires and a keen understanding of pacing, measuring of effort and intimate local knowledge. I love it for all these reasons and many more. 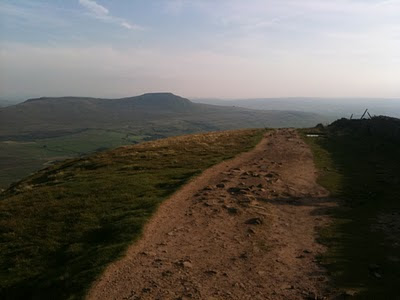 Meanwhile a Whernside that was beautifully dry less than 2 weeks ago (above) will have no doubt turned into a boggy washout with not much sign of another significant dry period coming at the moment. Darn, I knew I was tempting fate when I glued on those 34mm file treads for Ribblehead onwards.

Expect more ramblings over the next fortnight as I attempt to calm myself, cram last minute training in and stay healthy for the last weekend in September.
Posted by crossjunkie at 15:25