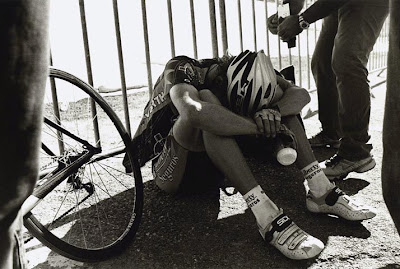 Offically entering my 'mid-years' recently has given me an unexpected perspective and new lease of life in terms of any cycling ambitions I may have had. Not unsurprisingly, loftier ambitions have come with a physical price in the form of fairly constant back pain and fatigue in trying to balance increased physical activity with an unyielding work and domestic schedule.
It has also led me to ruminate on the (mantra-like for some) concept of 'glory through suffering' as expressed by Tim Krabbé in his 1978 novel, The Rider:

“The greater the suffering, the greater the pleasure. That is nature’s payback to riders for the homage they pay her by suffering. Velvet pillows, safari parks, sunglasses; people have become woolly mice. They still have bodies that can walk for five days and four nights through a desert of snow, without food, but they accept praise for having taken a one-hour bicycle ride. ‘Good for you’. Instead of expressing their gratitude for the rain by getting wet, people walk around with umbrellas. Nature is an old lady with few friends these days, and those who wish to make use of her charms, she rewards passionately.”

This ideal has been adopted by Rapha as the heart of its philosophy and some might say cycnically, for its marketing strategy. As those who know me will note, I am not at all averse to a little bit of Rapha 'styling' but this is not about a company with a niche(?) market but about the idea itself.
Embrocation blogspot recently posted some candid behind the scenes photos at the Velodrome after this months Roubaix edition http://embrocation.blogspot.com/2009/04/064-belgium-and-france-end-of-road.html and the scenes of riders overwhelmed with fatigue and emotion at the end of a brutal race do nothing to diminish them from the incredible individuals that they are. In my eyes in fact, it enhances their stature and elevates them far beyond mere mortals like myself.
But this is where I struggle - does this lofty paradigm apply to average Joes, to those of us hoping to pick up a few more points at the local League cross race, to get up a steep long climb with a modicum of style rather than a huge struggle? In other words, is our own suffering at the blunt end of physical achievement any less valid than suffering and achievement at the rarified elite level exhibited by our heroes? 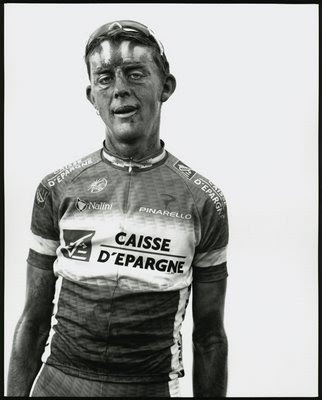 I suppose if suffering and its consequent glory are measured by outside observers then those of us hiding in the peloton of average are somewhat outdone by our more genetically and psychologically talented brothers and sisters at elite level. However, I suspect that the judgement comes from within - witness the personal pleasure and glow after completing a particularly hard interval session alone or cracking that sportive time from last year.
The greater the suffering, the greater the pleasure? What of the easy ride on a crisp Spring morning with friends, when a truce is in place on the climbs and there are no half-wheeling antics, merely a leisurely cafe stop and amble home in good company. Pleasure indeed, not much suffering though. Do we need to be burying ourselves for it to be worthy of the 'glory' moniker?
I have enjoyed pushing my personal boundaries as much as anyone else who has committed to pain and suffering in the name of competitive sport, and gained much from it on a personal, psychological even spiritual level. But being a creature of compromise and balance in all matters, I shy away from an absolute statement about suffering related glory, cast in stone like the Roubaix trophy cobble. Perhaps though, that is why I am still a committed achtervolger rather than a natural born winner?
Posted by crossjunkie at 12:07

There seems to be far too much talk of 'epics' and suffering on these blogs just recently.

What ever happened to riding for pleasure?

Fair point. There is certainly a macho undercurrent around and maybe many of us are enjoying some sort of mid life crisis and seeking to recapture our youthfullness through extreme effort.

Oh, just me then.

I, for one, do still value the easy ride to work for headspace, riding with my son who is 8 and just getting out on 2 wheels for the hell of it

The suffering is universal, only the speeds are different. That's why we feel the connection with the pros in Roubaix velodrome. We know their pain.

Pleasure? There's only fleeting satisfaction in pleasure. If a job's worth doing it's worth doing properly; if I wanted fun, I'd go to Alton Towers.

I think this may roll and roll, you're starting to question the essence and reason to ride.

I can see this generating some posts in the blogosphere.

Thanks for the kind feedback – thinking this through did raise some questions.

In the end I went back to how I ‘feel’, as in ‘gut feeling’, about riding – witness yesterday morning in a Langdale carpark where I was plain excited (like a kid) about heading off on the Lakeland Loop. It was going to be hard for sure, not too much glory probably but I simply wanted to get out and ride, no matter how fast, slow and with/without style. The backdrop of the mountains was enough in itself.

It just needed doing. Even Hardknott.