The visual treat that is http://herecomethebelgians.blogspot.com/ posed this important (rhetorical) question last weekend:

Process vs Outcome. A desire for a hard racing spectacle, rather than rooting for a particular rider to win.
A question well posed, and as it happened, well answered by Ghent Wevelgem yesterday. Cav was everybody's favourite (including mine for purely sentimental reasons) but in the end it was Process that won through as a bold escape by Edvald Boasson Hagen and Aleksandr Kuschynski succeeded against heavy odds in the form of a large star studded chasing group.
Cav was noticeable at the front on the Kemmelberg both times round, having missed the move through a puncture at an inopportune moment. He was in good company though as a number of other notables had ill-timed punctures. Leading the peloton twice up a hard cobbled climb - statement of intent I would say. 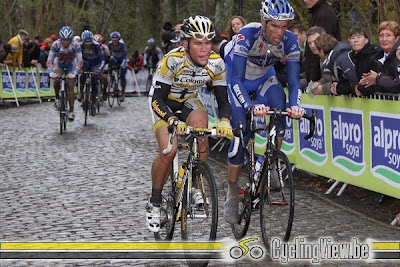 Not the result many wanted perhaps but a great piece of riding from the escapees that resulted in a victory every bit as well deserved as the blazing glory the sprinters sometimes acheive in this particular race.
Oh and a certain B. Wiggins GBr was 23rd - 2.14 down in the bulk of the second group in. Good to see.
My spot is booked on the sofa at 1pm on Sunday - what chance of a wet and muddy Roubaix this year.............?
Posted by crossjunkie at 11:53