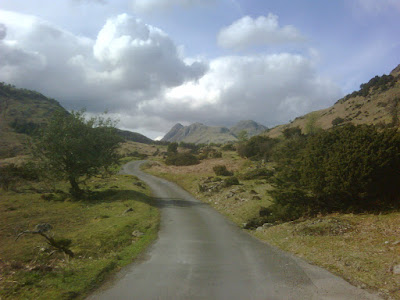 There was ample opportunity to test any theories of glory related suffering on yesterdays Lakeland Loop - a finale including Hardknott, Wrynose and the smaller but still significant Blea Tarn are a powerful statement about any ride's intention to inflict discomfort.
The result? A little glory, somewhat more suffering, but a clear, if momentarily unexpected winner. 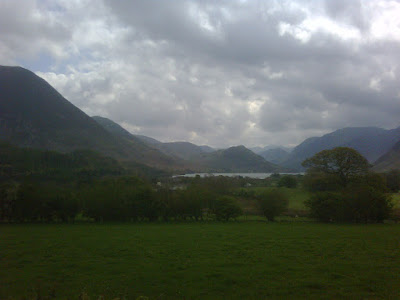 Hardknott was as expected, with wheelies, traction problems and other shenanigans consummate with a 1:3 climb. No foot dabs or bobbles though. What was less expected was the empty feeling on cresting the top - no one to share or even observe from a distance my moment of (personal) glory at completing a long held ambition (Mark was enjoying his own personal struggles lower down the slope). Save for the pair of ravens croaking to each other on the crags above, who may have observed a little moment of triumph though I somewhat doubt it.
With my childlike ego still bruised by the lack of approval at Hardknott we plummeted down again before grinding up Wrynose. The descent from here was life affirming in the sense that because I was alive at the bottom and in one piece, I felt my life was affirmed as still being on track and not diverted to an A and E department nearby. The smell from burning cork brake pads was hugely unnerving, there were seemingly no bail out options on the way down in case of emergency but luckily my tubs stayed glued on despite the heat build up. 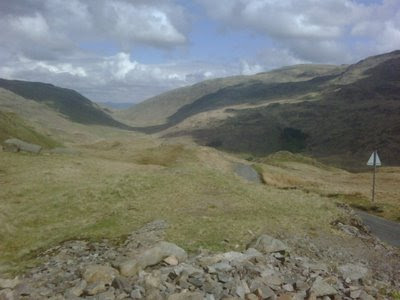 Onwards and immediately upwards to Blea Tarn. It was here that it dawned on me -I was out riding yes for the challenge, yes to prove to myself that I am not over the hill at 40 (humour me please), but more importantly because this was by anybody's standards, a simply stunning part of the world. I felt privileged in a genuine kind of way, at being able to express myself in this way in this mountainous terrain. For this day at least, the collective backdrop of Lakeland passes and mountains was all that mattered over above any notions of personal triumph or magnificence.
Posted by crossjunkie at 13:40

Don't worry about Hard Knott ont he Fred Whitton day - you'll share it with thousands. Many of them will be pushing or pushing a ridiculously small gear. I recommnd 48 x 14 ;-)

I've never made it up Hardknott pass (tried 2/3 times) so you've got my admiration.

God's country eh Alan!
What gear did you use? I got up on 34/26 in the Fred last year but it was a grind.
Oh, and you have taken a pic of my mum's house in Loweswater...second pic, of Crummock Water/Rannerdale Knotts and my mum's house is the tiny white speck mid picture! There's no better view anywhere.