There are some who clearly are suffering from nerves or a similar form of anxiety, some who are genetically predisposed to such processes, and those who want to win (or at least outperform themselves or their rivals).

A trip around the forums representing 3 Peaks riders (3 Peaks site, Singletrack etc) reveals a huge collective angst and obsession with what to ride and how to ride it. Maybe it is the fact that the Peaks can be tantalisingly hard to get into as a race, maybe that it comes around but once a year and takes on a huge presence of its own in the calendar, or maybe that it is simply a brutally hard race and loading the dice in your favour just seem like common sense.

Personally, those who know me will point to a genetic predisposition to obsess, about anything really, not just bikes. But bikes is where I am happiest ruminating, and the Peaks bike or bikes is the pinnacle of such persistant thoughts.

I would like to say 3 bikes, a la Haygarth but my budget and lack of willing helpers currently denies me this option. Next year perhaps...... 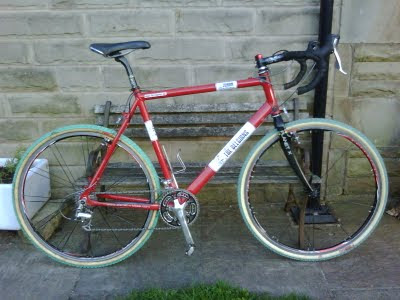 This will do Ingleborough and Whernside before being swapped at Ribblehead. Green Michelin treads may seem like a strange choice but I have always found the section from Simon Fell to Ingleborough quite greasy and slippy in the early morning mist that is almost inevitable. The descent to Cold Cotes can also be peaty in places and the extra grip over say Landcruisers doesnt go amiss for me.

When coming down the slabs after Whernside these too can be wet in places and the 'sticky' nature of the tread boosts my confidence.

46 x 11 is fine for the swoopy downhills to Chapel le Dale. The bottle cage doesn't affect my carrying on such a large frame and is sensibly positioned very low down to keep it out of the way. 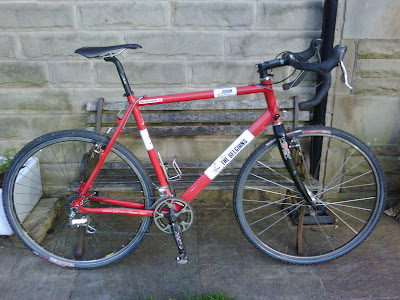 This is the Penyghent bike - fatter tires, lower gears and double bar tape to aid tired and sore hands. The Fangos might be billed as a mud tire but they have a good central tread that rolls well on the road and the tread is not that aggrressive so is well suited to the rocky PYG descent. Latex helps any nasty sidewall tears and cushions considerably over a clincher like a Landcruiser.

I'll take a chain tool, latex sealant and gas cannister (for road punctures) plus gels and get bottles handed up at the bottom of the first 2 descents.

This week has been a rollercoaster one - all was fine till Tuesday and then I started with an inevitable sniffle though not a full blown cold. All 3 of my kids have had recent colds and my wife is full of it too. The spare room has been in use this week I can tell you! No riding then for me either to try and stave off a proper infection - so far so good. I think. loosener on Fri and Sat I hope.

The Peaks messes with your head so much - confidence can ebb and flow dramatically if you don't control it as lurking in your mind is the inescapable fact that it is a huge effort even for the fittest of riders. Anyhow, I am ready now, excited and just wanting to get to Helwith for the start line.....

Good luck to everyone on Sunday!
Posted by crossjunkie at 13:18

28 spoke front on your Pen-y-ghent bike? Better keep your weight over that rear wheel coming down!

Only messing with your head Al!

I feel under-prepared and under-biked, I only have one!!!!

Have to ride tomorrow and check the brakes I fitted tonight work, nothing like leaving things till the last minute!