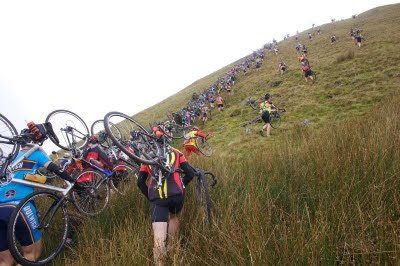 Yes it really is that steep!
Looking over to the Howgills from the summit of Whernside, highlighted in a patchwork of sun and shadow, it began to make sense. A little. Cramp still intruded on my brief reverie, but the moment was not lost. If riding, and what's more riding offroad is your pleasure, then riding on this long whaleback of a hill, overlooking the Lakes, Howgills and Dales, is indeed a rare treat.

Sure, there are many other wonderful places to mountainbike, or crossbike but for 1 day a year, the 3 Peaks Cyclocross allows enthusiasts a unique perspective to ride where riding is not normally allowed. To venture where previously only those on foot are granted access.

This is part of the unique flavour of the event - a one-off chance granted by the vision of one man, John Rawnsley, who has negotiated, promoted and sometimes fought to keep the race a regular fixture.

And it is a race, unashamedly so. As I prepared to dive off the flat section of the summit, down through the broken Shale and Millstone Grit bands, I was back focussing on the quickest lines, the smoothest transition from bike to foot and back to bike. Who was I racing? Whilst there were other competitors in front and behind, like most others, I had an eye on the time. My time. Unless you are right at the sharp end of the race, you are racing yourself - your potential, what has been before and what you want to come to pass. With a good time, comes a good place.

Up at the sharp end, the race was by all accounts gripping. Take one 7 time winner and World Sky Running champion, one Commonwealth and Worlds competitor in several wheeled disciplines and throw them together to fight it out against the backdrop of the Dales scenery. Race reports are to be found elsewhere but it was fascinating to see the nearly-man on so many occassions raise his game and master the discipline where he was weaker. Nick Craig can ride hard and descend with the best of them, but until now he has struggled to stay close enough to Rob Jebb when the course went uphill, as it does so brutally in places. Following a summer incorporating some good fell race results, he set about capping his losses once riding became impossible up the final climb to Penyghent, Nick's split time off the summit and down to the finish, catching Jebby in the process, was simply stunning - something which must have been hugely inspiring to watch. I met Nick a few times when racing many years ago, even buying an early version of Rock Shox off him when there were only a couple of pairs in the country. As a new pro he was kind and generous to a young, impressionable rider... He is respected and liked across the offroad community and his win will be welcomed everywhere.

One other who raised his game to new levels was Dave Haygarth. Dave too has put much of his heart and soul into this race, as rider, as team-mate, as volunteer publicist and it all came together on Sunday. Dave has enthused with me and for me over the Peaks and the fortuity of our geographical locations has allowed me to link up with him several times to ride together. The sight of the new 'white sex' shoes and matching Oakleys hurtling down the track was a boost to my flagging morale as the final ascent unwound. My climb was still a long way off being done but Dave had almost finished the descent, clearly on the ride of his life judging by the very few riders that had preceded him. Dave was rewarded with a 3:18 PB and 9th overall.

My rewards came in the form of a crash and mechanical free ride, in a respectable 4:18. Cramp though had chipped away at that golden 4 hour time, on Whernside's slopes and again on Penyghent. Next year simply has to be cramp free and faster. One day on from the race, tired and sore all over, I have already begun plotting, scheming, obsessing all over again. That is the draw that this race can have on you......

No its a lot steeper than it looks!

Great write up. I too glanced across at the Howgills and thought 'what a treat to be up here on a jumped-up road bike'.