off to the races

We came, we saw and err....... we enjoyed ourselves. The Belgians were out in modest numbers at our first cross race at Pignut Hill in Team colours - Duncan, myself, Mark and Mark (The Barber). 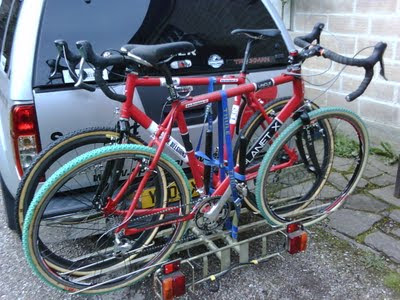 I'd forgotten what packing up and preparing for a cross race was like - other than being reminiscent of a military campaign. It took 2 days beforehand to assemble kit, prep bikes, faff around and get some semblance of order with things. One can only hope it will get easier with subsequent races.....

I had forgotten what a friendly scene cross was. Well, not forgotten, just missed it since the end of last season. All ages, all abilities, all lumped into one vaguely homogenous group intent on enjoying the challenge of the course and the craic along the way. If cross doesn't become one of the fastest growing types of cycling within the burgeoning two wheeled culture, then I will eat my tub (an old knackered one).

As for the racing, it was intense. As you might expect from cross. Strangely though, for the first race of the season, it wasn't that lung searing battle of mind over body. I actually felt good, sharp even. Even more gratifying was my desire not to hang on, but to actually race. To bridge gaps, to attack riders around me. This was relatively new territory for me really, a blast from the past when I used to be at the head of races rather than attempting to bring a modicum of style to the mid pack. 13th overall from 85 finishers was something to settle for gladly, and confusion over whether I or an ex team-mate graced the Vet podium melted into the post-race glow that only a good hard cross race can bring. I only planned to do a few races this season, but I can feel myself getting drawn in to a few more that I hadn't planned on doing..................
Posted by crossjunkie at 15:52