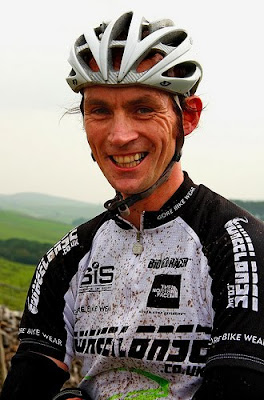 Photo: Andy Rush
By way of build up to the Three Peaks Cyclo Cross next Sunday, I thought it would only be proper to find out a bit more about one of the Peaks leading protaganists - Dave Haygarth. Dave runs a seminal blog about this unique event staged in the Yorkshire Dales National Park every year at the end of September. It is the toughest and biggest Cyclo-Cross event in the UK. Period. For Transatlantic readers (who according to Google Analytics currently outnumber UK readers!), think Iron Cross race but rockier and harder with more running/walking. Or so I am told....

I have had a bit of a running joke with Dave about how to address such a luminary of the Peaks - legend, guru, bigcheese, emminence grise have all been tried. We settled on svengali - which is given (by me) in recognition of Dave's commitment, promotion, knowledge and obsession about the race. Dave rides for the Wheelbase team, and as such features in cyclocross races at National level (he was 24th in the last National Cross Champs), as well as being a former overall winner of the North West Cyclcross League. He was the subject a few years back, of a BBC Countryfile video diary about the Peaks and his own preparation, something which helped promote the popularity of the race still further. Dave also rides mountainbikes but had an earlier mishap in the year which left him with a broken clavicle and a bit of a battle to get back to fitness: 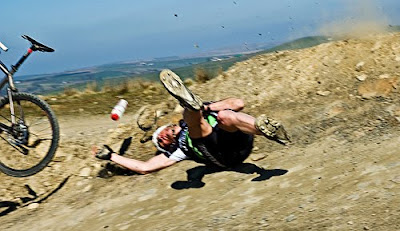 How long have you been riding, overall on a bike or specifically cross?

I rode a bike when I was two - without stabilisers I'm told. You had to fit them on separately back then and the story goes that my dad leaned the bike against the garage wall and I just got on and rode it. That's what comes from having an older brother I suppose. Seen it done. My cyclocross days started pretty late - as did my racing in general. My family's background was off road motorcycling so there was no cycling club membership or anything - I found cycle racing for myself really - with friends - about 16, but my first 'cross wasn't until the age of about 23. I was on my Mountain Bike and was in utter awe of riding next to Nick Craig and Chris Young in the race in Sheffield (where I studied). I wanted a 'cross bike so much then but I really had no money left after the booze expenditure.

You ride for Wheelbase – are they the most successful domestic cross team ever? How did you get involved?

I think Ace RT probably are in terms of history. Wheelbase are getting there though. I moved up to the North West from 7 years living in Cheltenham. I'd been very closely involved in Club life at Cheltenham & County CC (co-organising the National Trophy race there as well as a round of the national women's road race series for many years). I just fancied a break from a 'club' when I moved up here and was starting to get a few half decent 'cross results, so I just asked Stuart [Reid - Wheelbase rider and then staff member], and he said he'd sort me out with a jersey. That was it really - we have a lot of fun together in the 'cross season. 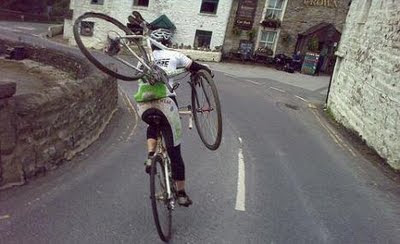 Team mate Lewis Craven tries a novel solution to the spare bike issue at the Peaks!

You're always looking at equipment tweaks for the Peaks. What is your ultimate no expense spared Peaks setup – bikes, tire choice, gearing, wheels etc? All the geeky stuff……….

Yep. It's no secret I love the race. I could always go further but try to keep a cap on things. Those SRAM 10 speed MTB groupsets look tidy for a race like that if I had £1500 per bike to spare.

(I note that Dave gave very little away there..... I'll run down my equipment choices later in the week.)

What gets you out of bed at daft o’clock to ride or run? Future glory at races or communing with nature?

Having to fit training round a family life. I never did any early training rides until I had children. If I want to spend time with them - which I certainly do - I have to work out a time to train. It's my only option!

How do you balance work, family, music projects and performing at elite, though maybe not quite Top 10 UK racer level (according to Singletrack magazine!)?

I just do. Most of it's down to very sturdy coffee. I'm not 'that' elite - I just have the balls to ride all the national trophies, that's all. Plenty of 'chipper' riders would beat me if they turned up!

When is someone going to make a classic film about the Peaks – like Sunday in Hell for Roubaix?

You mean that the Countryfile video diary wasn't it?? Sadly, it'll probably never happen. I had a good chat with the people from Fridge Productions who made those three videos (now DVDs) in the late 90s / early 2000s, and they said that it just takes so much money to do properly - they never approached covering their costs. Sad, but there's a certain reality to profitability.

Predictions for Sunday? Record for Jebby, you to improve on your best ever time and placing?

I think Rob's going as well as he ever has and it's dried out a good deal in the last 16 days. Lots (of crap weather) could happen between now and then though. Course records come from being pushed. If Rob knows he's got a four or five minute lead on the top of Penyghent, he'd be mad to push hard down there. If two or three riders were on a leader's tail. then we'd get a fast time.
As for me, I'll be happy with knowing I've ridden the best I can. I had a couple of crashes last year - one of which kicked off a cramp attack and lost me a place and some momentum - I want to keep upright and fast this year. I suspect I'll be about the same time as last year going on all the signs in my training [3:22] - but positions are another thing!

Any other background info about you that people should know?

It's my last season as a senior. I'm maturing in January. 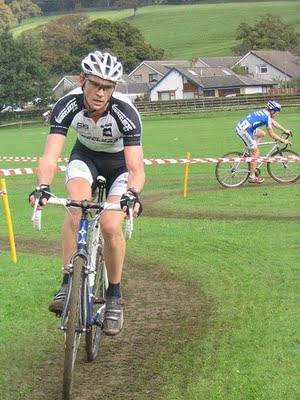 Watch out for Dave in his new all-black Wheelbase strip next Sunday - his descending skills are a joy to behold (until he disappears from view), combining that warp-speed the best descenders have, with effortless style. I think I offended him when, describing him once as a 'lunatic' going downhill, he gently corrected me with the assertion that it was confidence, not mental health deficiency that allowed him to go down so fast......