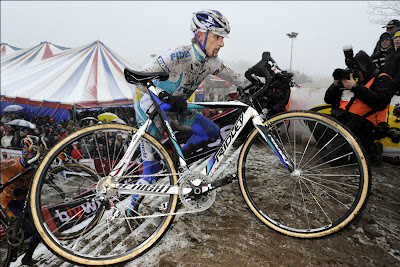 Bart Wellens is not so well, I hear. Diagnosed with the 'brother' of glandular fever, Cytomegalovirus, he's going to miss a chunk of the season. Still, look on the bright side - Neils Albert missed a good part of last season, came back and at the Worlds, destroyed a Euro field tired from endless racing across Flemish and Dutch veldrijd with the odd French inondable like Nommay.

I love Wellens - from the preposterous Wellens en Wee, his own weekly reality TV show, several episodes of which I have had the pleasure of viewing (!), to his karate shenanigins at Overisje, he always turns it on and then turns it up, to an adoring and beered up Vlaamse crowd (with one exception as you will see in the vid):

He's a fighter, a showman, a natural player - the foil to Sven Nys's seriousness. And the Belgians love him. Some of the Here Come the Belgians think he's great too, including myself.

Sadly there is simply no British equivalent I can think of, though Molly Cameron does her best over in the States to fly the flag of character at a cross race near you. Well, over the pond if you are in the UK. And when visiting Euroland once a year - Bravo Molly!

So enough idle and daft fan based adoration - come on Bart, get this biological nasty sorted and come roaring back to entertain us once again.
Posted by crossjunkie at 09:14

That's sad, but maybe a blessing, like you say. Albert was looking bloody strong before his injury last year though - don't forget that. There are a few similar guys on the UK scene but without the audience of following it's in a relative void. Come to watch a 'trophy race and see!