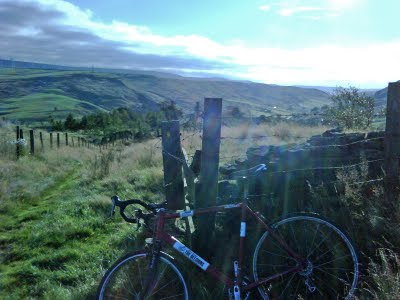 I went out for my last hard off road ride before the Peaks yesterday - it wasn't designed to be a particularly long one, more a shakedown ride with some hard Peaks specific efforts and a conscious effort to get into a flowing off-road riding style, one that will bear dividends come Peaks day. I am convinced that one of the secrets to a good Peaks time is being smooth - fitness helps too naturally(!), but being able to transition on and off the bike without losing momentum and at the right point can save you minutes. It's that experieence of knowing when to keep riding and when to bail out walking or possibly running. And linking it all together in a seamless fashion. Ahem.

The plan was to get out early on my own but I dragged fellow Belgian Mark with me too at the last minute - he's not riding the Peaks but I sold him a line about a nice offroad ride on our cross bikes. Rather cruelly (for him), we headed straight for Thievely Pike above the Cliviger Gorge via Dean Scout - well known to local fell runners this is a steep, straight up climb, unrelenting on the calves for nigh on 1000ft and with 90% carrying on foot. Pretty similar to Simon Fell then......... 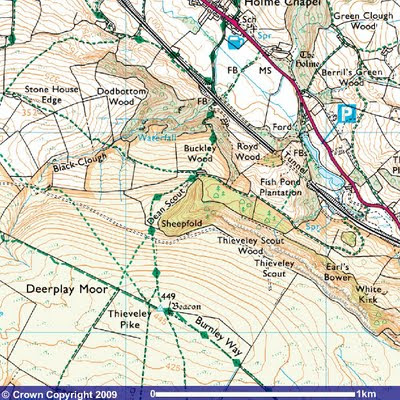 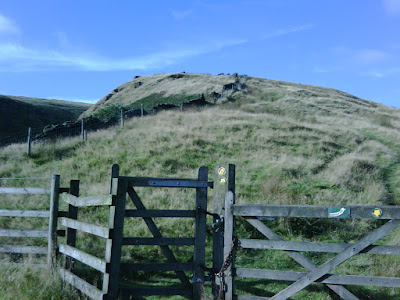 We rolled down and onto the Mary Townley Loop, a semi-classic off-road circuit of nigh on 50 miles around Lancashire, Calderdale and Rochdale, and then over onto Hambledon Hill, famous for - err, a weather station.

At the top of the steep off-road climb up Hambledon, I had the pleasant realisation that I was flying. Not just going OK but actually riding at the top of my (modest) game. A moment of panic ensued then - the Peaks is 2 weeks away and how do I keep this form till then without overcooking or undercooking things?

It was then that the wise words of Wiggo and Shane Sutton came into my head in a bizarre Yoda-like moment - easy, just do a week of steady endurance to protect your form, and then taper as normal. Research has proven it. Really.

A slightly jaundiced reader might at this stage point out that I am so far from a professional athlete, let alone an Olympic Champion that it may be argued that I am getting slightly ahead of myself, carried away even........

But, hey - the Peaks is important to me, emotionally as well as physically and I want to do as well as I can, even if I won't be troubling the top 50 or anything much below 4 hours.

Armed with the satisfaction that I had got myself to the point where I could race the Peaks rather than survive, I promptly punctured. Just a little reminder that the Peaks is never entirely straightforward. We rolled around Hambledon for a bit and headed home for a shower. I know Wiggo wouldn't have, being the consumate pro and all that, but I allowed myself to partake in a pre-celebratory bottle of red that evening. There's good anti-oxidants in wine I hear, good for recovery.
Posted by crossjunkie at 10:31

Best of luck with the three peaks.

Hey Andrea, good to see you are still riding! See you Sunday.....