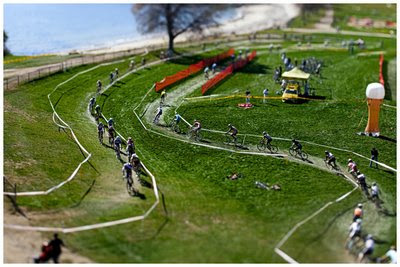 Despite the Tour's engrossing nature this year and my complete delight in bawling at the telly in support of a Brit rider in mountain stages and summit finishes (something I hadn't done since I was a teenager watching Robert Millar), lurking beneath the surface is the thought of knobbly tires and transitions from bike to foot and back to bike.......
May be it is the unrelenting rain that has softened the ground everywhere, maybe a success in what was the bunfight of gaining 3 Peaks cyclocross entry, maybe this great photo from Janol Apin and his P'tits Velos series.
A recent session (re)sealing tub walls with Seam Grip brought home the impending arrival of all things close to my muddy heart. Gluing follows next, in that now yearly ritual that threatens the waistline with the inevitable Belgian brews that are an indispensable part of the process.
Yep, it is only 7 weeks to the first race on the NW calendar so crossistas, dust off your wheels and get out on those trails. My local offroad circuits are a little overgrown with the verdant growth of June and July but it won't be long before they are back into shape and ready for some good tempo and technique sessions. Practice those technique drills - if you are anything like me, being a natural allround athlete of poise and ability doesn't necessarily come with my genetic make-up and the specific cross techniques of on and off need to be hard-wired into my reluctant physique.

Happy crossing!
Posted by crossjunkie at 11:35 No comments:

This is Lance's Damien Hirst creation for the final day of the Tour, rolling along the Champs Elysees. Apparently this is no sticker job, the product of a deranged 4 year old girl let loose with a pile of cheap stickers - no, those are real butterflies. Every one!
I suppose it's better than tying a load of Tracey Emin's soiled underwear and bed detritus to your bike and letting it flap in the wind..............
Posted by crossjunkie at 09:23 No comments:

The defining feature for me of this current Tour de France has not been the internecine team dynamics in Astana (seen before at La Vie Claire), the obfuscation of huge mountains to be climbed followed by long flat run ins to the finish (we can't have a gladiatorial summit showdown every day) or even the now usual appearance of Holywood gliterrati at the biggest VIP shmooze event on Earth.

No, this TdF has been marked as separate by the coming of Twitter. Never before have we had the same insight into what the riders have thought or are thinking, have done or are doing or perhaps are thinking of doing. From their post stage dinner table atmoshperes to the team bus meetings, the massage table music choice to dietary peccadilloes.

The riders are now our riders, in much the same way as celebrities and their culture purport to make the remote all too familiar and the celebs our own property. Except unlike celebrity culture driven by a rabid papparazi and gossip mag industry uninterested in accuracy, what we get on twitter is rider led - their choice in other words.

Styles differ - lancearmstrong gives you a smorgasboard information overload about everything he is up to. Part infomercial, part publicity exercise (doping test #??), part psychological warfare. Twitter has clearly been a blessing for his media profile, allowing him huge control over what information he releases. He has even resorted to throwing the baby out of the pram in relation to main stream media and communicating only through twitter.

bradwiggins gives you a somewhat different take - sparse, dry, often witty and what you would expect from a man who considers what he has to say before opening his mouth.

cadelevans also uses his partly as a fanzine publicity tool, publishing answers to what fans and commentators have been asking him.

There are many others worth checking out - mcewenrobbie, ghincapie to name a couple. Whilst the TV coverage gives you the action, the internet news sites the results and formal interviews, twitter gives you an almost real time impression of the down time of riders, the time we never really see or hear about and the Tour is all the more compelling and fascinating for it. The elite community of the peloton has just become a little less remote and inaccessible. Tweet on.
Posted by crossjunkie at 11:28 No comments: 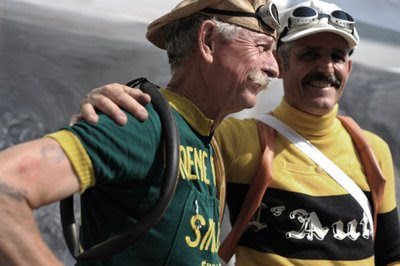 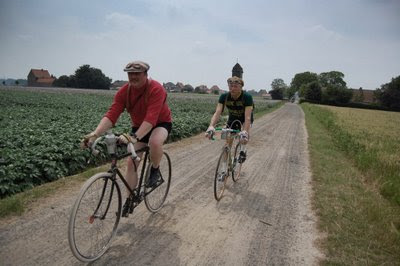 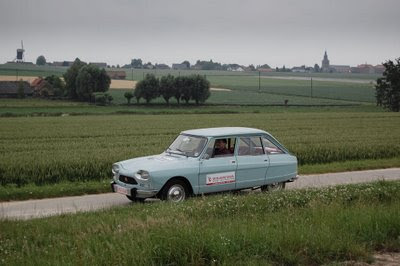 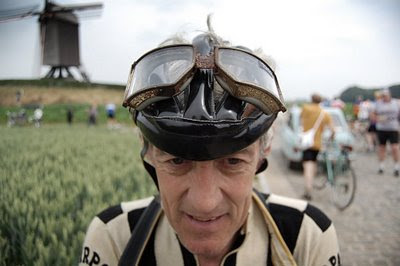 Whilst we weren't talking about the Tour, I caught an Armstrong interview with Ned Boulting for itv4. LA was laidback, nonchalant but talked with subtle barbs aimed at a certain Spanish pretender to his crown. He is the king of smackdown talk without ever resorting to anything so trashy as actual smackdown talk. On twitter I noticed he subtley patronised Contador saying that they would need to re-lay the tarmac where the Spaniard had done his turns in the TTT. Yeah right - Armstrong was pulling as hard as anybody and Popo and Kloden were hardly soft pedalling. Insincere and false praise indeed.........
I'm loving the conspiracy theories around help from Big George and Columbia to leave LA in the Stage 3 break with all other GC contenders behind the split, the did he or didn't he ease up, to keep Spartacus in yellow and even better the assertion that Contador did that massive turn on the front at the end of the TTT to try and put LA in yellow and screw things up!
I hope the next few weeks are going to be rivetting and unpredictable in a way the previous Armstrong Tours never were.
Posted by crossjunkie at 11:51 No comments: 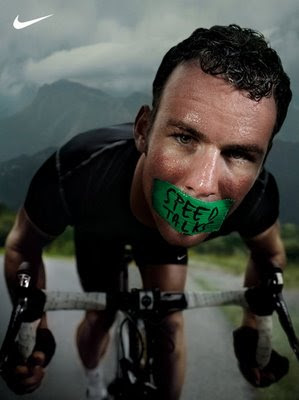 Here's a sneak preview of some stuff you're likely to be seeing as the Tour unfolds. Unashamed viral marketing from a huge global company, but hey, Cav's going to be providing some excitement over the next 3 weeks and good luck to him.
Here's to some titanic battles with a certain Belgian who favours a different Class A..........
http://www.youtube.com/watch?v=sE8zhUYMHA4

Posted by crossjunkie at 20:47 No comments:

Oh yes, crossjunkie examines all the big issues that other blogs are afraid to cover.......

Actually, sitting here in the middle of an 'official' heatwave (ie more than 2 days of sun), a recent comment from Mark Leyland (past NW Cross League Champion) got me thinking. Soothsayer Mark observed that his tire choice in future seasons would be restricted to file tread for the dry early season and Rhinos for the rest of the predictably torrential and muddy seasons.
A bold gamble or a vision of the future we could all do to take heed of?
In true investigative journo fashion, crossjunkie googled a choice phrase and pulled the definitive answer straight of the interweb in 30 seconds flat. Well, sort of.
At this point I need to lay down my credentials for such high class research. After an abortive career as a professional orchestral player I plumped for the most obvious follow up, a geography degree. Missing a trick by not becoming a geography teacher like any other self respecting outdoor loving person, I plunged headlong into a Masters degree in Environmental Change. At a time when even George Bush Jnr's disbelief in climate change would not have stood out, this was radical stuff. I can't remember much about it, though I got my MSc. I do remember having a sense of deja-vu over the past few years as various dire prognostications came to pass, most of which were being touted and summarily dismissed at the time of my degree.
So what of cross, that most rainfall dependent of cycling disciplines (except open air track racing....)?
Well I am happy to report that the future of proper, real, sloppy, mud type cross is alive and kicking, contrasted with some trumped up road crit style dust races at the beginning of the season. Just how will climate change affect cross in the region close to my heart? - witness these nice graphs from that esteemed body, the Met Office: 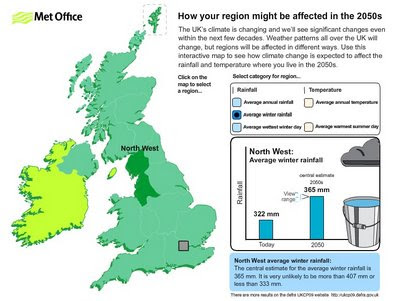 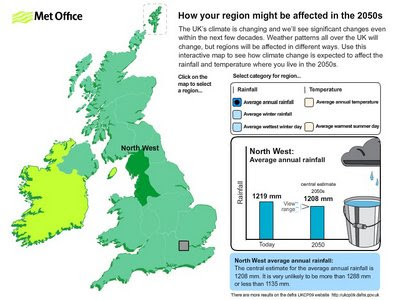 So, over time the North West will have 13% more rain during in Winter, with a slight reduction in overall yearly rainfall - sounds wet (and windy probably) to me. The average wettest day will also increase 13% - going to be some real downpours out there. Happy days.

And for those of you outside the North West? Don't bother - come and live here. House prices are still low(ish), the cost of living is cheap, pies are awesome and you can get a pint round the corner from my office for less than £2. If you don't mind being battered at some point in the evening.......

Indeed, those Yorkshire crossers will have a pathetic 243mm of winter rain to our 365mm. Pah! As for East Anglia, forget it - 165mm is the best you'll get, though the figure is 14.5% up from the present so it may feel a little muddy by comparison.

London? Actually they will get almost as much as the Yorkshire lot - 237mm winter average and a whopping 16% up on present. Might almost want to make me live in London. Perhaps not.

So there you have it - the North West is officially the best place to be a cross rider. It pisses all the time, and all courses are a mud bath. Except for September when it is too hot for cross.

Of course, these predictions are for 40 years time when even my enthusiasm might be waning slightly. So we might not notice too much difference in the immediate future. I'm still with Mark on this one though and will be running nothing but Rhinos all year even in heatwave July, just in case it rains a bit more. 2050 is still, then, a long way off but we have to think about the kids, right??
Must remember not to turn off those electrical items to standby, the lights, heating etc and get some real change going so our children can benefit from good old fashioned mud action.
Posted by crossjunkie at 15:05 2 comments: