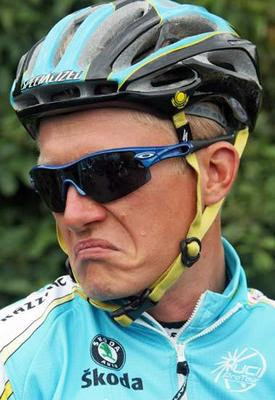 1.the disgrace or the reproach incurred by conduct considered outrageously shameful; infamy.
2.a cause or object of such disgrace or reproach. 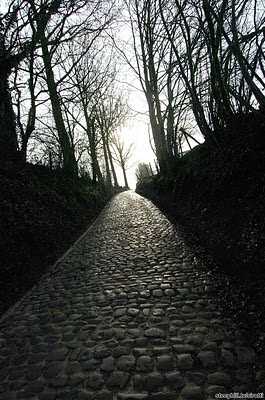 There's always a sense of deflation for me at this time of year - sure, Fleche Wallonnne, Amstel and Liege are still to come but they don't capture my imagination in the same way.

I didn't make it to Flanders (or Roubaix) again this year - but there's always next year.

Cancellara won all three of my favourite races - E3 with guile, Flanders with panache and then Roubaix with crushing superiority. All intriguing races, all with different scripts but the same outcome.

Not making it to Flanders was somewhat offset by running my own Ronde - many, many thanks for all the comments, good wishes and apolgies for absence. Come and ride with us next year as I can't see it not running again.......

Apart from Spartacus and his feats of legend - the other defining ride for me? 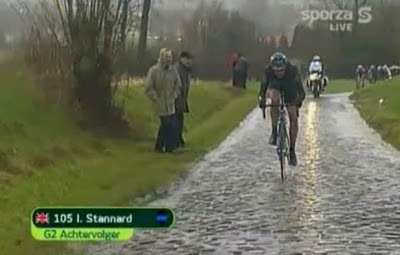 Brutal conditions at Kuurne-Brussels-Kuurne brought out the best in Ian Stannard and his gritty ride for 3rd place summed up for me what the Classics are about - the changeable weather, rough surfaces and there being no-where to hide when the proverbial lands. Make or break. Persist or give up. Inspiring stuff.
Posted by crossjunkie at 11:25 1 comment:

Thanks to the dilligence of Dave Haygarth for these pics........ 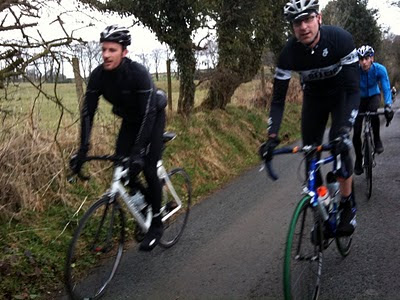 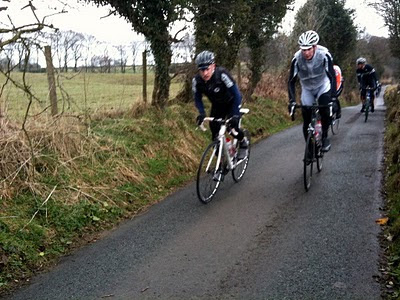 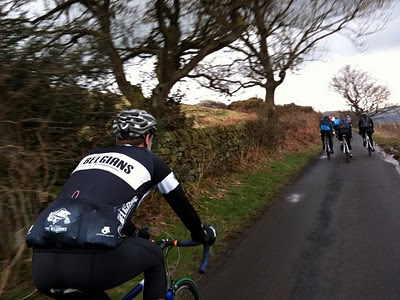 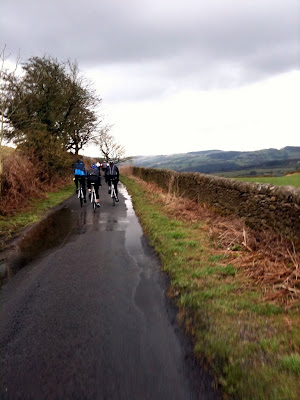 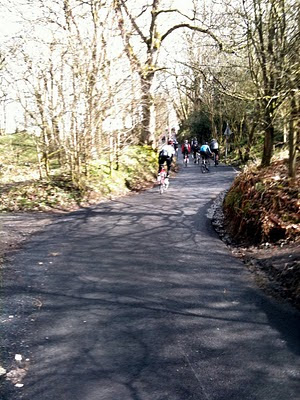 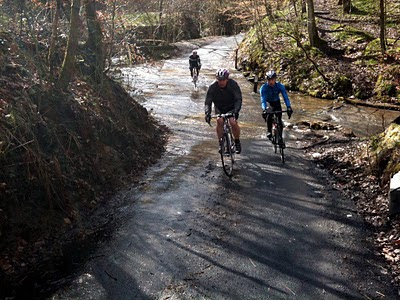 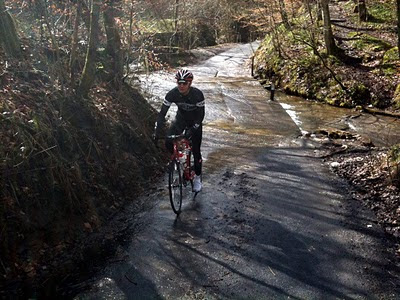 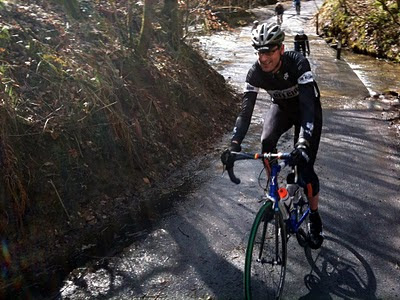 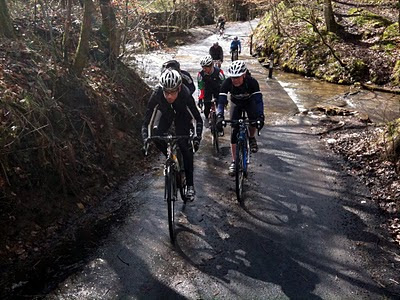 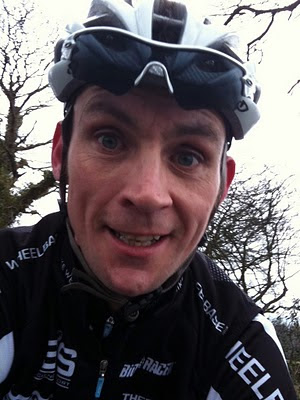 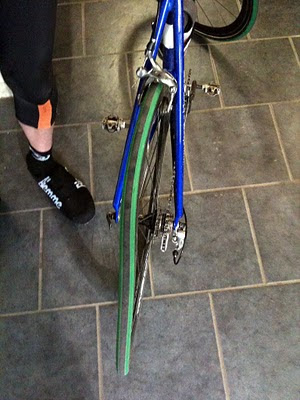 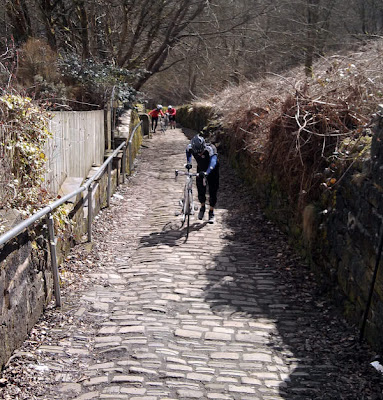 I guess a picture (thanks Dave Powell) of riders pushing up a cobbled climb isn't quite representative of Saturday's ride (though that climb was 'cleaned' by one or more) - there were plenty of ridden cobbles and longer less brutal climbs too. In addition to some deserted lanes and backroads.

However, as the Koppenberg in some ways defines the Tour of Flanders, so too the Packhorse climb out of Hebden town centre dominates the RVOL. Both can bring riders to a standstill and force even the most experienced off their bike. Flanders is not about just the Koppenberg though - it is the unrelenting succession of small but sharp climbs that taken as a whole, give it it's fearsome reputation as a hard ride and race.

The East Lancs version is no different either - whilst only 50 miles, there were many that seemed surprised by the amount of climbing packed into such a short space of time. There are flatter sections, most notably after the hills surrounding Pendle Hill, but bascially the climbing starts early and continues throughout.

It was great to see such a good turnout for the first running of this ride (slightly nerve racking actually) but myself and Mark had signed every twist and turn and were lucky with a lack of missing signs, so that people were able to follow the route in groups and on their own, as necessary.

Already the ride seems to be gathering a reputation as a bike wrecker - there were a number of early mechanicals that forced some back to the car or meant they were chasing hard for a good while. My own mechanical was as final as it was well timed - a completely tacoed rear wheel followed a broken spoke not long before the most vicious descent into Hebden. Cheap Taiwanese carbon and considerable heat from the braking led to a complete delamination and meltdown of the rim. Game over. And a wrecked Open Pave tub which really peeved me......

At this point Dave Haygarth kindly volunteered to ride on ahead and return with the car to pick me up. Whilst he monstered himself over the final hard section of the route to make good time, I bumped into a neighbour who was in town and was kindly offered a lift back. Dave therefore had an early finish and a good workout but not before he had cleaned the Packhorse climb out of Hebden. For this feat and his heroics he is duly awarded: 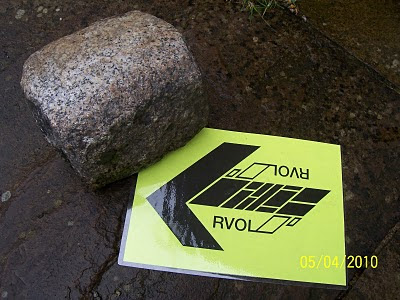 I gather a couple of others may have also cleaned the climb - Sam included? If you would like to claim your consolation Ronde 'pebble', then please contact me. Otherwise bask in the glory of your achievement and the respect of your fellow riders. Special mention also to Ian from Pendle Cycles who had the temerity to turn up on fixed. We all thought he was mad, but he had the last laugh as he rode away from most of the riders on every climb. Chapeau. (Your're still nuts though).

Big thanks to Duncan and Mark for signage help, Dave H for riding on unnecessarily and everyone for their chat, and friendly comments.

Hope to see more of you all in future.
Posted by crossjunkie at 10:44 2 comments: 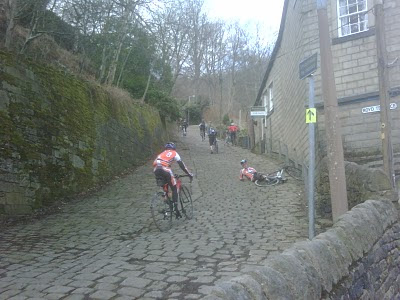 Many thanks to those 30 hardy souls who came out and volunteered themselves for our ride today - good riding, good weather and good chat. It was great to meet new faces, put faces to names and to ride with familiar suspects.

A few photos to keep things going till a full report tomorrow - my (re)hydration strategy of Belgian brews precludes anything of real substance at this moment in time. 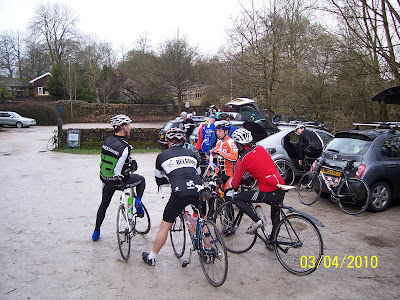 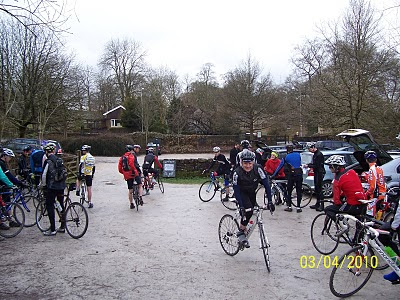 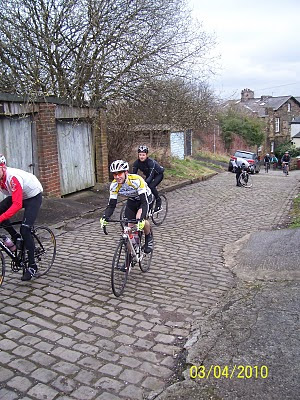 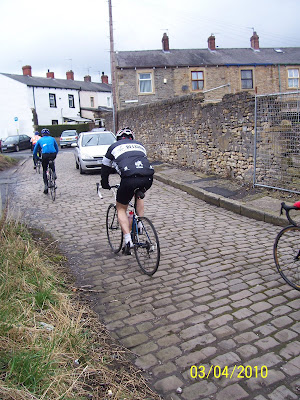 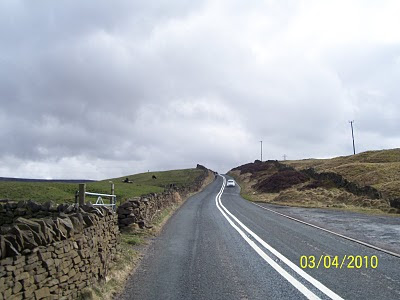 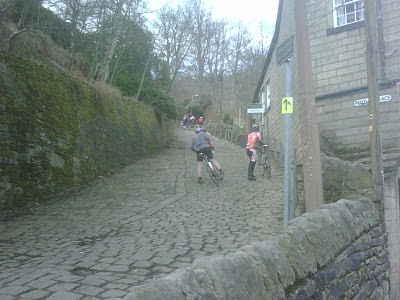 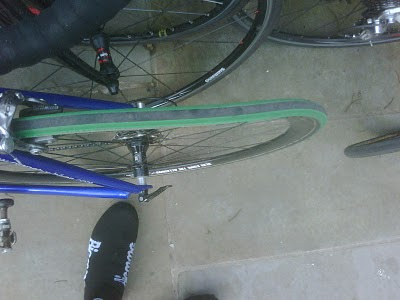 More photos welcome - send to me or the Here Come the Belgians site herecomethebelgians at gmail.com and I'll get them up.