I realised the other day that I'm lucky enough to have two 'cross mentors. They'd been there a while but I hadn't quite noticed the impact they were having for the good, on my 'cross endeavours.

Now I'm no elite athlete - I had some success with 'cross in the early 90s when a full time student, I mean athlete, winning quite a few local League races and getting a top 25 position at the Nationals - but although the results have significantly tailed off of late, 'cross is still my passion and I want to improve simply for improvements sake. A big gap in 'cross particpation from 1993 till a few years ago has meant a steep re-learning curve, as well as a bafflement as to why my body does not respond the way it used to. The first point is easy to document, the second is a little harder toe explain but that's for another day.

Anyways, I've been fortunate to hook up in recent years with the effervescent Dave Haygarth, who whilst nearly wrecking me many times with his superior fitness, technique and ability in countless training sessions together, has been kind enough to pass on much of his hard earned race-craft and technical skill to my benefit. Don't underestimate the value of riding and training with someone who is better than you, particularly if they share what they know. My ego crumbles at times but I bounce back, determined to get a little closer to him next time. And it's coming....

My other 'cross mentor is Greg May - a (not-for-long?) Dublin based exercise physiologist and coach with a no nonsense, slightly old skool approach backed up with heaps of science. Greg and his partner Pauline (a talented IronWoman) have been regular guests at mine on Greg's racing forays outside Ireland and during these trips, and between he has regularly passed on nuggets of training advice around intensity, structure, technique and a lot more.

Greg's approach can be summed up in this superb article on 'cross training. I won't repeat it in full - go read it for yourself - but a couple of bits jump out for me:

CX is not a pretty sport. If you don’t train in the suck you won’t be able to race in the suck.

Sometimes the best advice is the most simple - you can dig out an entire seasons success from that small article but better still, go find yourself a mentor, a training partner, a 'cross soulmate and learn together the only way there is - by getting muddy.
Posted by crossjunkie at 11:04 3 comments:

I've been lucky enough to have been riding around on a sample Pro Carbon XLS for a good while now, and now it's on sale can finally spill the beans.....

Constructed from 12k carbon it's a full carbon disc cross frame that is aimed fair and square at the race-savvy cross rider. It's the sharpest feeling cross bike I've ridden with snappy handling and a very stiff response to hard out of the saddle efforts. A large (PF30) bottom bracket area contributes to this stiffness, as do the boxy rear chainstays and the tapered headtube (1.25 - 1.5") that keeps things solid upfront too.

Cable routing is all internal across the top tube with no under bottom bracket cabling to keep things clean and tidy, as well as helping to cut down on maintenance after drownings with the jet wash. The top tube itself is one of the most comfortable I've ever carried with, being unencumbered with cables and perfectly flattened to lay neatly across your shoulder. The rear disc tabs are at the rear (rather than in the rear triangle), allowing easy access too for pad fettling.

Clearance is great up front and rear, despite the 'racy' tolerances between rear tyre and bottom bracket area, and during mudfests has presented no significant problems despite some build up in that area. The absence of cantilevers and bosses more than makes up for any build up of mud there and my bike has kept working fine even when conditions are really bad. 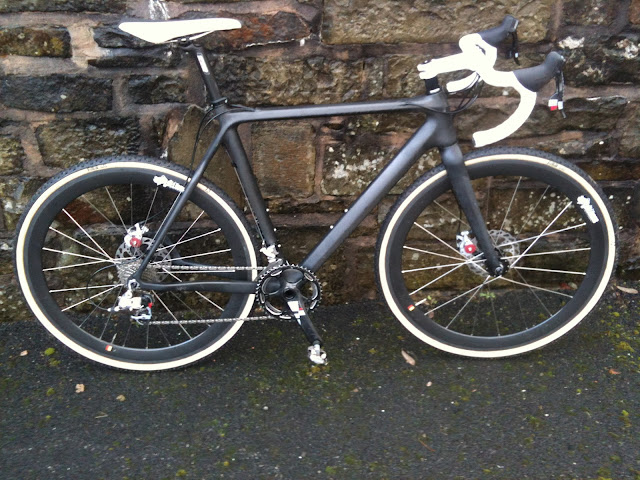 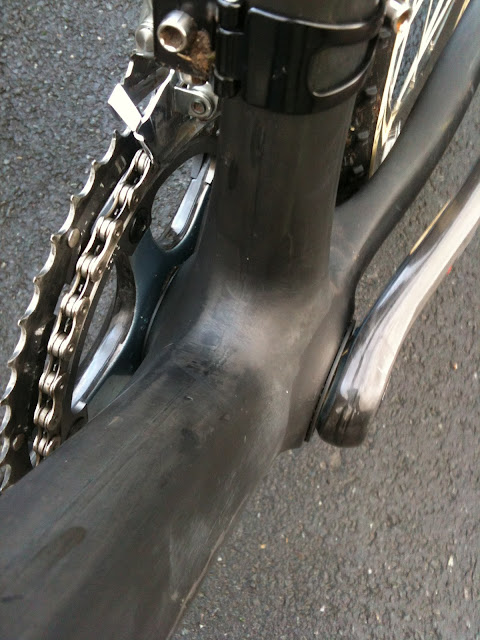 The beefy headset, stiff bottom bracket and boxy stays mean this frame just flies under pressure - compared to alloy cross bikes I've had the difference in stiffness is startling. It's not a harsh ride on rougher surfaces, just purposeful, giving you lots of feedback about what surface conditions are like. It builds up light too - with higher end components and carbon wheels it's happily threatening sub 18lb territory and so carrying feels superb on that comfy top tube.

It's just too tempting not to make comparisons  between the XLS and it's sister company's One One Dirty Disco that I've also been riding. Both are superb race bikes with surefooted handling, good behaviour in the mud and light, practical (ie robust) carbon frames. Whilst the Disco also makes for a good all-round off-road riding bike, eminently suitable for 3 Peaks duties and long off road rides alike, the  XLS perhaps veers a little more toward an out and out racer, feeling sharp and edgy and just itching to be ragged round a lap.

It is worth pointing out the difference in sizing - my 56cm Disco has a longer top tube and taller head tube than my 57cm XLS which partly contributes to that planted, stable feeling compared the smaller, more chuckable XLS. It's horses for courses - I've raced both on cross laps, ridden both on long rambling off road rides, and 3 Peaks trained on both. I don't have a favourite - they both do the job, whenever and  wherever. You takes your pick....
Posted by crossjunkie at 12:31 13 comments: