pendleton's got it covered


Here's a bit of fun courtesy of Ms Pendleton, Gatorade and I am assuming Danny MacAskill. Or some other loon who needs to get a proper bike and go out and get the miles in like we did in our day........
Posted by crossjunkie at 09:48 No comments:

majoring on the machismo 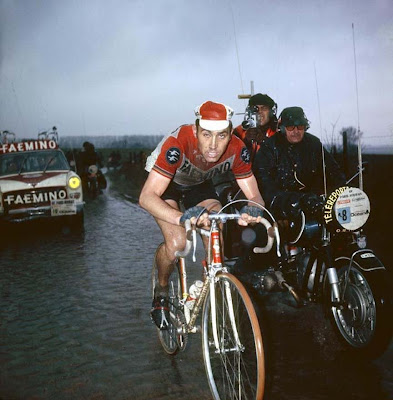 I love Big Ring Riding - "It's not just a chainring, it's a state of mind". Luminaries such as Merckx, Lapebie, Ullrich, Yates, Cipollini and VDB - they're all there in their macho glory. Big legs, big achievements and big egos. Not to mention big gears. And the machismo comes across unashamedly, even for the women featured! Outside of Bing Ring Riding and in a cosmopolitan peloton, Jens Voight is celebrated as the toughest of strongmen in the peloton, and compared in some circles to Chuck Norris.

I've posted before about this as well as such 'male' concepts as glory through suffering - it's not that women can't and don't take part and embrace them, just that the language, vocabulary and whole ethos seem particularly male to me. I am happy to be corrected on this, by the way, by anyone who wants to de-mythologise such constructs, being only able to view it clearly from my own, male perspective.

For me however, this macho, and mostly male led image that much of cycling likes to portray for itself, contrasts starkly with the reality of the visual images attached.

I'm talking men in lycra, men with shaved legs, above all men being acutely aware of tiny variations in style and body form. Is this really the macho element to the sport we all recognise or something that is glossed over? 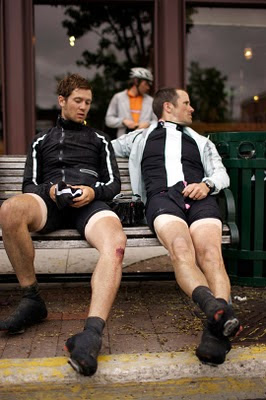 So why the shaving? Such practical considerations? Emulation of my heroes (not heroines as they are mostly doing it anyway)? Or do I do it if I am honest, because it just feels nice, sensual, sexy even. Oh come on?! All you male leg shavers out there - are you telling me you have never looked admiringly down at your freshly shaven legs and liked what you saw? Liked what you felt. Or gone the whole hog and waxed like a nameless, but intrinsically more honest friend? Maybe that was a practical response to a practical problem but hey, only a tiny minority of men and mad bodybuilders wax, right? It just doesn't fit in with our preconceptions of manliness.

I possibly hear a groundswell of noise from many riders who deliberately cultivate the hirsuite look - but tell me that you have never considered shaving at some point, only to be dissuaded by societal pressure, your other half who married a 'real' man, not to mention the faff of getting it done? No??

Macho man indeed with your lycra, your svelte legs and your obsession with shape and weight. 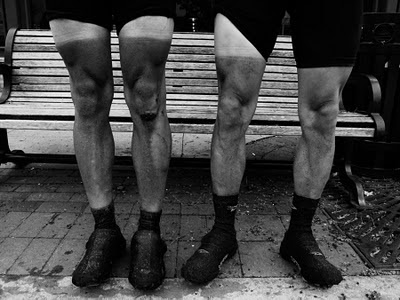 Are cyclists fundamentally metrosexual then, breaking down barriers between what is male/female/other?

Metrosexual, a portmanteau of metropolitan and heterosexual, is a neologism of the 2000s, one definition of which is a man (especially one living in a post-industrial, capitalist culture) who has a strong concern for his appearance or a lifestyle that displays attributes stereotypically associated with homosexual men, although he is not homosexual.

Somehow, I don't see cyclists leading the way for a re-classification of sexuality and gender through the use of 2 wheels - they are far too obsessed with their own little corner of the world and watts, tire pressure and gearing will always trump more arcane theories of social order and sexuality.

For me though, I am secure enough in my own construct of masculinity to carry on camping it up with shaved limbs and body hugging lycra, tastefully done of course. Why even today a gay colleague asked curiously whether I shaved or used Veet. The answer came easily without any trace of embarrassment or hesitation on my part. My transformation to cyclosexual is complete.......

It appears that Cycling Weekly have pinched my idea and run a feature this week about leg shaving..... You heard it all first though. Plagiarists.
Posted by crossjunkie at 14:10 1 comment: 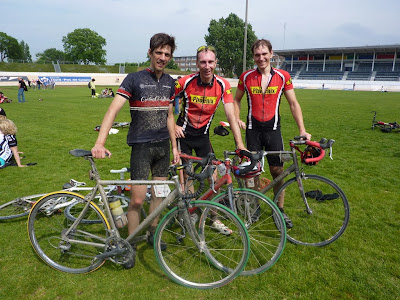 I rode the Flanders sportive 2 years ago with Gary (far left) - he's one of those lithe, lean effortless type riders packing a climber's genetics and the technique to match. Honed as a semi-pro mountain biker in a previous Century and a different continent, he made mince-meat of the Flandrian bergs and cleaned the Koppenberg while all around him skidded to a halt and fell off in a heap, blocking the way. He must have moonlighted as a cycle courier too at some point as he found gaps that didn't exist as he swerved and dodged the carnage to the top of that legendary climb. He hurt me on every climb after that too, and on the crazy blast for home from the top of the Bosberg.

Fast forward to last Sunday and a trip to the Hell of the North and its bi-annual Sportive. He did invite me to complete our Classics double but I was unable to go, much to my chagrin.

Here are some of his random recollections, preceeded by the text I got on Sunday night after he finished:

Oh. My. God. Words can't describe how hard that was. Torrential rain, blazing sun, had it all.

- Riding all of 100 yards on Saturday and wondering whether I'd be able to finish that section never mind the whole thing.

- The detritus of bottles, tubes, pumps at the start of the Inchy pave.

- Looking back at the Arenberg trench and getting shivers down my spine. That was mainly the cold, but it was exciting too. 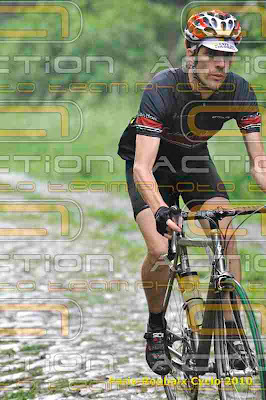 - Seriously considering the possibilities of dying in the thunder and lightning in a northern French industrial estate.

- Thinking that the pave couldn't get any worse and then hitting the l'Arbre section and almost ceasing any forward motion.

- That moment of turning into the velodrome and onto the track... was possibly the greatest cycling moment I've ever experienced. The only slight scare was when I went way high on the track and for one second thought I might go skidding down the banking after hitting one of those ads.

Chapeau. We shall call you Flahute.
Posted by crossjunkie at 14:22 2 comments: