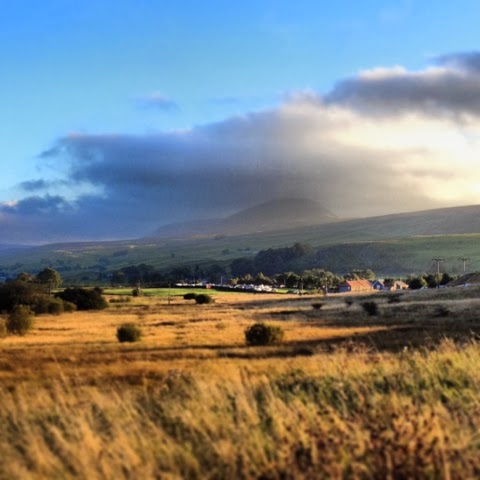 “To eat is a necessity, but to eat intelligently is an art.”


That should be my 3 Peaks maxim from now on. I messed up this year, despite dishing out supposedly learned advice only the week before.

It all started well - a personal best by minutes over Ingleborough and in a good-for-me 75th place too, a clean descent to Cold Cotes and a quick timecheck dib and bottle pick up and onto the road. However, I then made the mistakes that when compounded would cost me a trouble free and potentially personal best ride.

The gel tasted good in the shop out the squeezy sample bottle but when breathing out of one's proverbial after the climb out of Ingleton, trying to stay with a fast group, it was more akin to ingesting an acrid fruit concentrate. Result, a little gagging and some coughing and the group rode away. Lesson 1: try your gels/drinks in race-replica training situations and NOT on the day. Then my brain switched off and with hindsight I simply didn't drink enough. I'd had a vague notion of drinking water late in the race as it tastes cleaner and goes down easier when tired than a sugary carb drink. I hadn't communicated this to Mark who, on my instruction handed me this 'unloaded' bottle at Cold Cotes. My mistake, not his. Lesson 2: even your most trusted support crewer is not a mind reader.

Whernside went OK, well as OK as one might expect whilst being blown all over the shop by a mean spirited crosswind that actually dumped riders from on their bikes into a heap a little way downwind from their take off point. Being tall with a large gate-like bike to boot did nothing to improve my mood as it tore into me as I walked/jogged, pushing me around so I looked like a Friday night drunk weaving my way home.

I was hungry coming down into Ribblehead, hungry as in it would have been nice to sit down and have a nice pie and chips, or something equally comforting. A friend commented after that I looked grim making the change to the Penyghent bike there - truth was I was bloody starving and panicking a bit about getting enough food down. There's nowhere you can really eat on that descent so you have to wait till the road down to Horton. My wife's legendary Aga-baked flapjack tastes like heaven at all other times, but was simply too dry and sticky to get down easily whilst trying to push on, on that road section. I got it down eventually, not a pretty sight chewing and breathing at the same time. Cue another slightly less acrid gel and a reasonable amount of liquid.

But the damage had been done with the lack of fluids I suspect, being the prime suspect. I started slowing toward the top of Penyghent Lane and felt the first twinges. Cramp is a funny thing - it can tease, flirt with you and think better of it and bugger off to wait another time. Or it can decide that today is the day, it's having you and there's nothing you can do to escape its unwanted attentions. By the time I was approaching the turn right onto the final bit of the climb, it had done its worst and my quads were ballooning into Robert Fosterman-esque creations. In my mind at least..... 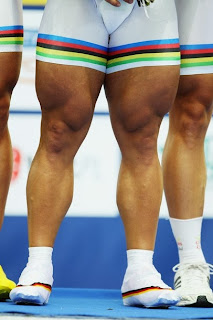 They locked solid and that was that. Cue the following rigmarole: sit down, look at the view for a bit, swear blind you were never coming back to do this bloody race, snivel a bit, try and stand up, fall over again, curse. Eventually they unlocked enough to affect a half-hearted shuffle and upward progress resumed. But my impetus had been lost and it was hard to pick up the pace, waiting for that 'laugh-in-your-face' twinge that signalled a return to a seated position.

I made it to the summit, disheartened to have seen riders I was racing only a short time ago, already well on their way back down. But I finished, not too far outside 4 hours, but still a way short of my target time and position.


The positives? My pair of simply wonderful On One Bikes Ti disc Pickenflicks were totally controllable, dependable and never missed a beat. And for 2 Peaks at least, I was going well and on target. As ever there is next year.... I think.

Thanks as always to my pit crew Mark for being there for the 20 seconds of contact time we had during the race.
Posted by crossjunkie at 19:22 3 comments: 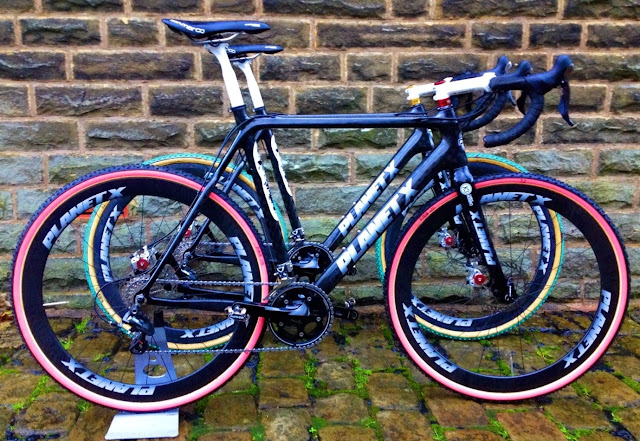 I rode the sample XLS last season and found it superb for flat-out racing - click here for my initial review. This year's builds are Ultegra based with some dedicated Shimano 'cross equipment in the form of top-pull front mechs and 'cross specific chainsets.

The frame at the heart of my XLS is a full carbon monocoque, hand-laid up to optimise strength and stiffness in the areas that count. It has a tapered headtube, wider at the bottom than the top, that makes a big difference to the handling in bumpy or technical sections, allowing you to ‘point and steer’ much more than with a conventional ‘straight’ headtubed bike, which can allow you to be knocked off line more easily.

The bottom bracket area is beefed up with extra carbon and also in size, and you can really feel this stiffness when putting pressure on the pedals and in technical riding. Whilst coloured paint finishes look great, the glossy black 12k weave finish on the XLS helps hide the inevitable scratches and scrapes that a season of muddy cross races brings. One of my favourite aspects to the XLS frame is its top tube. Flat on the top and bottom, it makes for really easy grabbing and very comfortable shouldering during the running sections of a race. Additionally, the cables are internally routed through the top tube – less maintenance as they are protected better from water and grit and contribute to less scratching of the frame in that area.

As with many new generation ‘cross frames, the XLS has disc mounts to allow full disc braking throughout. The debate on whether discs are better than cantilever brakes for ‘cross still rages. Certainly they are more powerful, but do you need the power? Some say yes, some no, citing a little extra weight for disc systems as a negative. For me the debate is less about the braking power, weight, or feel, but about two main advantages over cantis. Disc brakes mean no rim braking, and in ‘cross where rim and brakepad are covered in a fine coating of grit or mud on a constant basis, this means no rim wear. Which means your nice (expensive) wheels don’t get trashed every time there is a muddy race and don’t need replacing so frequently – a big advantage to the cost conscious ‘crosser. Furthermore, discs give clean lines around the fork and seatstays where on other traditional bikes, the cantilevers are sited that cause a big build up of mud and vegetation. In certain conditions, I have ridden disc bikes that kept working for longer than their cantilever rivals due to the reduction in build up of clag in those places. For someone with one bike only, or a lack of willing pit crew, a disc bike can be crucial in getting to the end of the race without grinding to a muddy halt. Whilst there are newer and pricier part- or full-hydraulic systems on the market, the mechanical Avid BB7 brakes make for super easy maintenance, predictable modulation and if used with harder sintered pads, great wear even in the worst of conditions. For 1 hour ‘crosses, I personally don’t feel the need for anything more complicated.


With crisp white graphics against the laquered carbon weave of the tubing, my 'crossjunkie' edition bikes should look fairly smart. For a lap or two, at least. 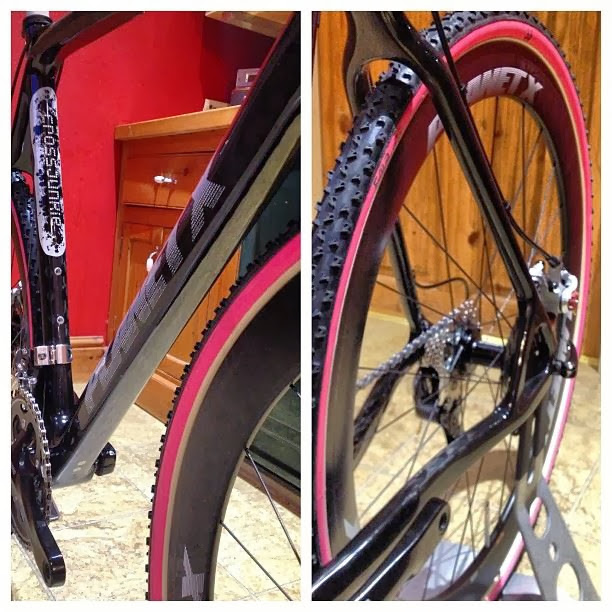 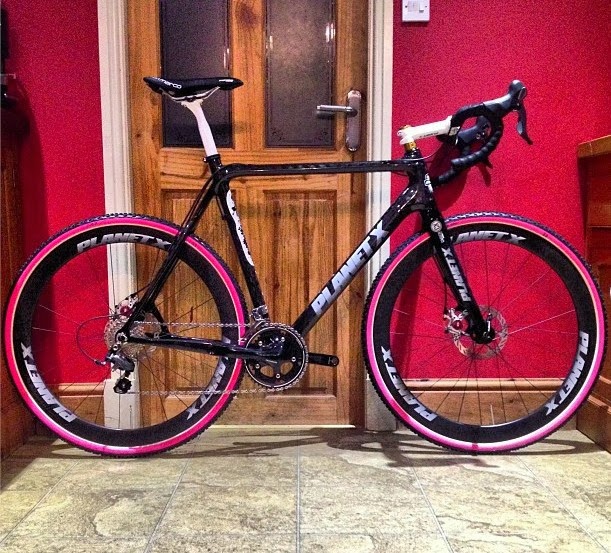