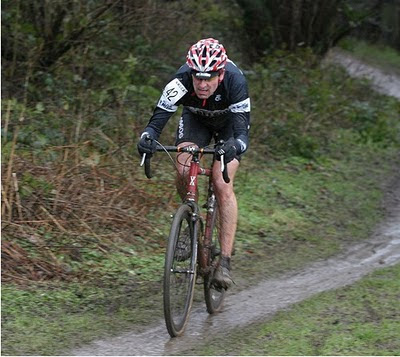 Ooops, a couple of weeks turned into several. Writers block, losing my mojo? Or just not being in the mood....... Apologies, anyway.

The cross season for me has been a productive and engrossing one - more of which later. For now, it is only appropriate to indulge in that yearly pursuit of 'predict the Wereldkampion'.

As a (relatively) well informed watcher of the Euro scene via a constant stream of self generated DVDs, I've enjoyed this season more than previous ones. Racing has been on the whole tighter, less predicatable and not dominated by the patron Nys, more shared between some evenly matched protaganists. Nys at the top of his game is unbeatable. But his conditie hasn't been top all the time. Either deliberate, or age induced, others have been allowed in on a regular basis, so much so that he relinquished his World Cup crown to Stybar on Sunday at Hoogerheide and has not had the same crushing tally of victories as previously.

Albert was always going to thrust his prodigious talent to the fore after the Worlds triumph last January, and for a time, in the early season, I was in danger of losing interest as he looked likely to be running away with the season as a whole, courtesy of numerous definitive victories. However, the others, notably Nys and Stybar wised up or shaped up and he has not been able to ride away with impunity so often. Sure, his attacks are usually devastating, but not always conclusive of late. I have been amazed by his lack of mental strength at times - more than once a bit of bad luck or minor mechanical has had him losing the plot, most famously launching a bike at his pit crew in the middle of a tantrum. Compare that with Nys who has had some crucial crashes or mechanicals and made the best of the situation with great determination and fortitude. 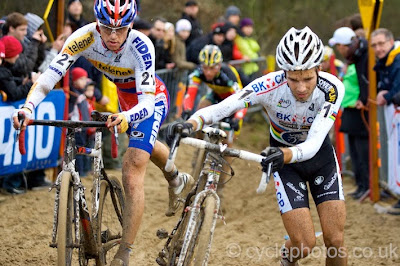 Superb photos including this one can be found at www.cyclephotos.co.uk
Stybar for me, has been the most exciting rider. Sure he has not dominated in the way Albert has at times, nor Nys with his treademark late surge, but he has raced in a savvy and consistent way, picking up good placings and going for the wins when his confidence and condition came together. I love his style, all effort and commitment from gun to tape. The Belgians like him too, particularly now he speaks pretty good Flemish.......

Bart Wellens has been largely absent and hugely missed by me - some recent promising results still won't be enough to salvage a ruined season. Next year, Bart!


And to the Worlds? Here's my prediction:

Nys wins, only just, ahead of Stybar and de Knecht – dramatic last lap, Nys with one of his awesome do or die efforts gets in just ahead of a charging Stybar who has been aggressive all race. 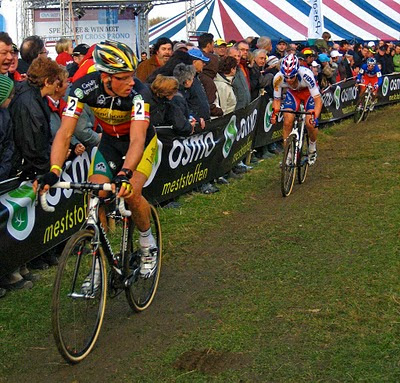 De Knecht has been consistent all season and it pays off with a podium place. Well deserved.

Albert? Gets a bad start (again), chases up to leading group, bobbles or has minor mechanical, throws a tantrum and finishes off the podium.

There you have it. 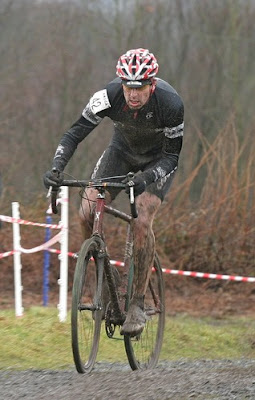 A select dose of racing this season yielded some gratifying results in a couple of races and the following information, to be filed away for future seasons:

Green Michelin Mud on FMB casings rock - better grip, better handling in atrocious conditions than even a Rhino (which I still love). When, oh when, will someone bring back the Michelin tread of old. Simply the best mud tread ever.

Play with your pressure and learn to go as low as you dare. Though I dont know the true accuracy of my track pump, it was reading 20psi for the ice and 23/24psi for grassy and muddy conditions. I weigh 12 1/2 stone, but if I can go this low then you little 9 1/2 stoners definitely can. Try it. It's the future.

Run - short runs, hill runs, steady runs. Do what you fancy most, but above all do it. It works, and well.

Deep section carbon wheels are for pros or museums - braking, handling, reliability are all compromised over even an average alloy rim, let alone a good pair of alloys, particularly on the kind of rough and muddy courses we get in the NW. Maybe it is the fact that I have cheap carbon rims (not the high end wheels the pros have), but my Bontrager X Lites consistently felt better in deep mud despite what they say about carbons cutting through it. I love the bling of carbons as much as the next crossista, but my mud tires are going to be mounted on alloys next year with a sole pair of carbons for fast and dry courses. When we get them, which is like, never. Oh, and for ice which we may get more of now.......

Form your own team - I/we did it and it has been a blast from start to finish. On second thoughts, join us! We haven't graced the podium, nor won any team prizes but we've raced each other hard and done our best. We are road legal, licenced up and looking for a cross and cobble experience near you. Of course it helps if you have a talented designer type on board to design everything from team strip to stickers to beer mats to underwear. Well, not yet underwear but it is only a matter of time... 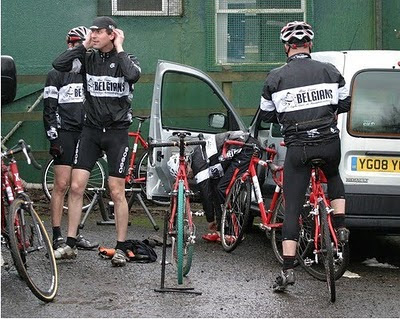 Happy Worlds watching but remember, the Classics are but a month round the corner.