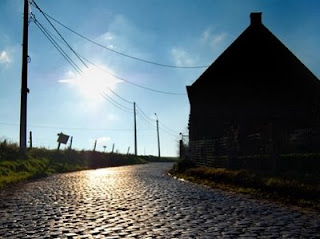 In these days of economic gloom and dire predictions, I find I am turning to pleasant memories as an insurance policy from the sense of depression and helplessness that can take hold if one listens to the news too much. By way of celebrating events removed from the day to day hum drum and worry of modern living, this series of posts looks at epic rides that still retain that glow, lingering in the memory and sustaining me through the fatigue and stress of earning a living and keeping things going generally. I can think of no better explanation of what I am talking about than a post on Belgian Knee Warmers entitled 'Clarity' from June 2008

Rooted in the complication of Western society, our daily lives lack the now of our ancestors. Days pass into weeks of restrained existence; days spent where our most definitive stroke may be command-S. Tens of thousands of years of descent with modification in our sapient brains tell us this isn’t what life is meant to be. So we go on vacation. And what do we do? We look for the defining moment. Something to restore life to our life.

And so I found myself in Ghent last April with a couple of friends (Winkie and Gary), a bike and a dream that had been hatched some years before almost as soon as I got back into cycling after a 12 year break. Lacking the pioneering spirit of my youth, I had plumped for a package tour to ride and watch the Tour of Flanders, cosseted by organised travel and accommodation arrangements. It was also a good excuse to celebrate my fast approaching Vet status and the official beginning of middle age (not my official definition!) with my 40th Birthday.
Forsaking more than a cursory few Belgian brews the night before (Barbar, Leffe Brune), an early start saw our trio mingling with around 18,000 others at the start in Ninove, lining up to ride the 140km event. If you haven't experienced the organised two wheeled chaos at the start of one of the great European sportive events, it is something to behold.
Baffingly, we missed the official start thinking we were simply riding toward it with a steady stream of others. Gradually it dawned on us that we were already on the course - it didn't make much difference as I felt like a child at Christmas, riding on hallowed roads in the motherland of cycling. Winkie stopped for what goes down in history as the longest pee ever - I swear me and Gary were close to getting the bonk just standing around waiting (Winkie does nothing in a hurry, except running up mountains). The numbers started swelling as large groups coalesced on the road and the pace began to lift a little. The arrival of most of the Sunweb Projob Team livened things up somewhat - only in Belgium would you get the Team Car flying down the centre of a very wide boulevard, all the team members drafting behind with a gaggle of wannabees frantically trying to hang on in the slipstream.
It was on the way to the Molenberg, first climb of the day that the true scale of the numbers became apparent and it was definitely right there in front of us when we turned the sharp right into the cobbles and half of the cycling fraternity of Europe was rammed into the narrow street, grinding to a halt and cursing. I added my English profanities to the collection as I hadn't travelled for over 24 hours to walk my way up the climbs of the Ronde. But walk we did and then the weather started. It pissed down at that point and my mood went from euphoria to something very black indeed.
From then on, the weather for the day was truly Flandrian - all four seasons in a 6 hour period, including sleet, snow, driving rain, drizzle, gales, grey clag and blazing sunshine! With my own clouds darkening my mood we pressed on through the Wolvenberg where we lost Winkie never to be seen until the finish (we did wait honest) and through to the first long section of cobbles.
There is a longish cobbled high street in the gruff Lancastrian town where I work, but they are mere baby cobbles compared to the huge bruisers that the Belgians use. If you have not ridden Belgian cobbles before then you may be forgiven for thinking that graphic reports of their violence to machine and body are exaggerated but you would be wrong in that assumption! Given that I was in a foul mood at this point and needing to vent some nervous energy, I went ballistic on entering the cobbles - a quick look at my pulse meter showed I had hit a new max heart rate of 178, higher than that seen in a cross race. Brutal.

On we rolled, through Flandrian lanes and streets and toward the Oude Kwaremont (steady ride and relief that it wasn't blocked with riders), through the really narrow lanes to the Paterberg (steep as, but ridden with panache) and to the Koppenberg. Like Hardknott in the Fred Whitton, the Koppenberg is simply hardcore and nags away in the back of your mind, increasing it's presence in your mind until the picture gives way to reality and it rears up in front of you. 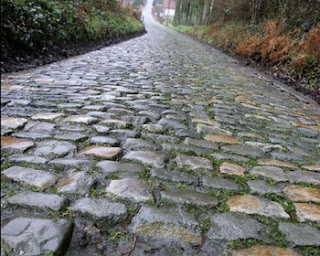 This was the scene that greeted us (except it was still pissing down for us at that point): 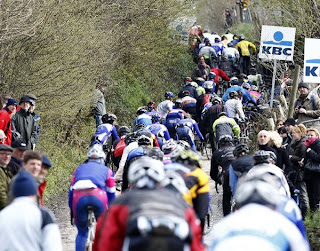 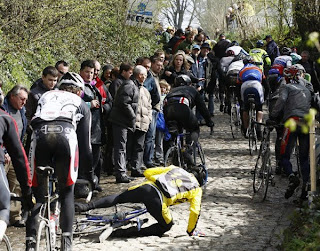 The cobbles were packed, greasy, muddy and very uneven and quickly I had to walk. Incredibly, Gary stayed upright, pinballed off a few beefy Belgians and made it to the top without a foot down. Chapeau, King of the Koppenberg!
The initial major hurdles were overcome and we journeyed on toward the climax on the Muur.........
Posted by crossjunkie at 15:00