Sunday's Lune CC promotion took on a military edge with it's new venue, Halton Army Camp near Lancaster. Adi Dalgleish and his team had found a great new venue at Halton, being effectively private land and close to the motorway. The course too was close to the car park and having facilities like heated loos (!) and a food tent really helped as the whole family came this time. The course itself had plenty for the strong rider, some good flowing corners and descents to get right and some bits where running was needed unless you were really strong (a rarity these days, the running that is). Luckily we avoided the assualt course nearby. 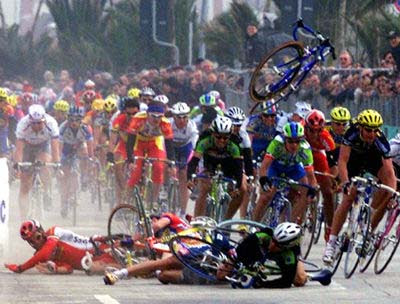 The start (with over 80) was a bit more dramatic than usual - a downhill off camber tarmac turn was an obvious hazard to the field coming after a couple of hundred yards or so, and was sensibly omitted by pulling the tape back. Unfortunately no one was aware of the 5ft drop off a grass bank that this course change left. The leading few riders must have had a fit when they had to launch off it into the air but landed (just) and carried on. Paul Wotty and Adam Palmer took flyers off the banking and didn't quite land it, crashing heavily though luckily on the grass. I for once had had a good start and was bearing down on Paul as he slid to a stop sitting on his bum and facing the wrong way up the course. Understandably he looked a little concerned as I bore down on him, but disaster was avoided although I believe others came down behind me. Paul went on to ride a great race and finish 2nd Vet and 13th overall. Adam didn't continue but I hear was OK.

Surprisingly the good start left me in the top 10 and latching onto a good size group chasing the 1st 4 riders who had already broken clear. Interval sessions, the turbo, less booze and the previous 3 races conspired to produce actual racing legs in me and I hung in there for the whole race only giving way to a few faster riders who had not had such good starts. The usual mid race meeting and brief chat with Mick Style took longer to come than usual as he carved his way through the field to 1st Vet again. Mick must have the cross equivalent of an Ice Truckers turbo diesel engine - takes ages to rev up but when it does it just keeps on pulling and pulling. Even Chris Young doesn't start that slow before crushing the field! Mick, watch out for a crossjunkie coaching post soon on Starts.... 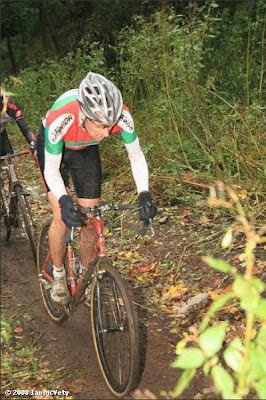 After a consistent race, no crashes and with steady riding, I ended up 19th and 5th Vet - result! Even mrs crossjunkie seemed vaguely impressed and was kind enough to offer up a shout and a bottle each lap that I politely declined. It was nice to race with 2 internationals, Ian Bibby and Johnny McEvoy who took the top 2 spots respectively. It's what I like about cross - a grassroots sport where you can rub shoulders (literally) with riders at the top of the sport. Rob Pugh was the best of the rest and is having a consistently good season. Dave Brailsford was challenging but was unlucky this time, puncturing and then having a mechanical on his spare bike and failing to finish. Martin Woffindin took 1st junior and Sue Clark rode strongly for 1st woman - apologies to her if she felt I was a little too slow at conceding the racing line as she came past half way through. Misunderstandings between riders seemed to be a theme of the race as I overheard a few slightly heated interactions between people - I was guilty of not giving as clear instructions as I should have done a couple of times, but we can all race together without too much friction I am sure, particularly given fields are getting larger this year compared to last.